“I Had No Idea if It Actually Worked as a Film”: Christopher Makoto Yogi on the Sundance Directors Lab 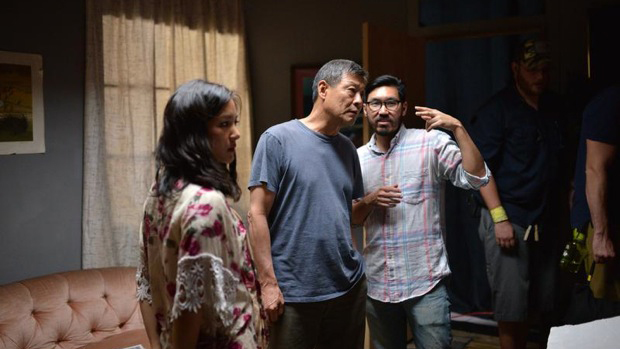 by Christopher Makoto Yogi
in Filmmaking, Production
on Jun 18, 2015

Hawai’i-born director Christopher Makoto Yogi is at the Sundance Directors Lab with his feature, I Was a Simple Man. “Like marionettes on a toy stage, the ghosts of Seiichi’s past haunt the countryside in this tale of a Hawai’i family facing the imminent death of their eldest,” is how its described by the Sundance Institute. Below, Yoti describes his scene work with advisors at the Lab.

Today ends week number three at the Directors Lab. These past three weeks have been a motion blur, too fast to process, but now in this brief Sunday respite I’m sitting outside looking up at some Utah trees wondering how the hell I was fortunate enough to end up here.

(For those of you immune to pure sentimentality, prepare yourselves. Remember, I’m sitting here in an actual mountain forest.)

A confession: a few days before arriving here at Sundance I got major cold feet. I’d written an extremely sincere screenplay based on my experience of death in the family. I’d injected this personal story with elements of surrealism and horror, and I liked what I had on the page, but I had no idea if it actually worked as a film. There were images and there were characters that seemed to work, but tonally it was complex and I hadn’t any real clue how I’d execute these words I’d written. I was convinced I’d arrive at the lab, be revealed as a fraud and be kindly escorted down the mountain.

To illustrate this complexity, take the latest scene I had to workshop: in it, my protagonist sees his dead wife for the first time in the form of a ghost, who appears as a young woman from the ’50s; also in the scene is a teenage version of himself from the ’40s, and oh yeah, don’t forget his first teenage love — she’s in the room too but she doesn’t speak at all. It all takes place in the Hawaii countryside and includes some cryptic dialogue in Japanese. The tone is surreal but has moments where characters say words like “We loved you” without any irony. I was terrified of this scene.

So, over the course of a day, I hounded Artistic Director Gyula Gazdag to help me figure out what it was I had actually written. Gyula, being the cinematic wizard that he is, spent an hour talking me through the pages helping me to unearth the core of the scene. The next day, I rehearsed the scene with my incredible actors who discovered the rhythms and emotions that both were and weren’t there on the page. Creative Advisor/DP Caleb Deschanel helped me to find the visual language of the scene, unraveling the beats step by step in order to convey its air of surrealism and mystery. By the time I was sitting in the edit two days later, I realized that I had an actual movie scene that made sense and was haunting, magical and pretty fun. Most important though, I learned that somewhere within even the most enigmatic pages I’d written was an actual film. (All of this might sound like stuff someone attending a directors lab should already have a handle on, but you’d be surprised how easy it is to lose yourself while deep in it.)

Even on my roughest days up here up on the mountain (and there are more than a few rough days,) it’s hard to feel too sorry for yourself. I look up and I see a cinematographer who has spent the last three weeks helping me discover a striking visual language, and an editor who’s dedicated to unique and interesting storytelling. I see a crew of talented filmmakers who get to work at 8 am so that I can play around, try weird things and follow my creative whims. I hear the advisors whispering in my ear, reminding me to bring as much I can to each and every moment I’m here. Because in a mere two weeks this will be done and I’ll be off the mountain.

As I’m counting down the days, I already miss these people. I keep seeing myself two months, three months, twenty months from now, looking back with such gratitude for the focus, the energy, the laughs, and then two years from now I’ll look back wondering why I didn’t express to each of them every morning how much creativity and generosity of spirit I felt. Because I know that five years from now, wherever the hell I am, I’ll regret that while deep within the most overwhelming of life moments words often do fail me. So this will have to do for now: thank you and I love you all.