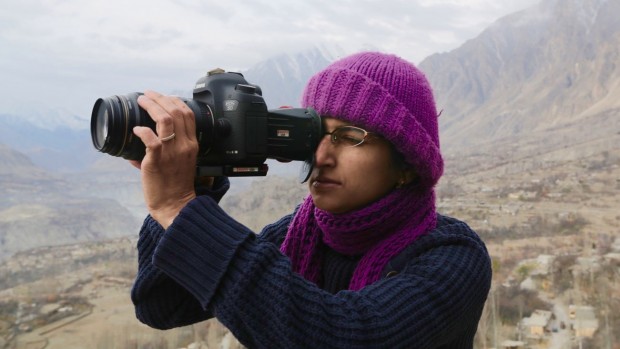 by Taylor Hess
in Directors, Interviews, Producers
on Jul 27, 2015

Released in Pakistan and set to open in New York and L.A. later this fall, Dukhtar tells the story of a mother and her ten-year-old daughter who flee from their home in the mountains of Pakistan. Below, first-time feature filmmaker, writer, co-producer and co-editor Afia Nathaniel speaks with me after the German premiere in Munich.

Filmmaker: Did you always want to be a filmmaker?

Nathaniel: I’m originally from a big city in Pakistan called Lahore, where I grew up and was educated. We didn’t have any film schools or film industry, but I always loved writing and storytelling. I never consciously declared myself a director or a writer, but that was the trajectory I was on, even when I was a computer scientist.

Filmmaker: When were you a computer scientist?

Nathaniel: After I finished my degree. But I soon left the world of science and the world of lucrative jobs, and began to work in advertising, which in Pakistan is the closest thing you can get to filmmaking. It was great training because I learned to tell stories in just 30 seconds and learned how to change people’s perceptions. It was good training but not satisfying in the long run, so when I got a film internship in Switzerland, I left the world of advertising to work for a women’s nonprofit. After two years in Switzerland, I got a call from the chair of Columbia offering me a spot in the film school. When I found out I got in, I quit my job, packed my bags, and bought a one-way ticket to New York. I arrived in New York in August in 2001.

Nathaniel: 9/11 was crazy and difficult, but it became even more of a catalyst for me to tell stories from my part of the world to audiences who didn’t know about it. Since I arrived, New York has been a stimulus in ways that’s always ongoing.

Filmmaker: Did you feel any sense of displacement?

Nathaniel: I never felt like I didn’t belong. I loved New York right away. It was the kind of city that was dirty, smelly, alive, and it reminded me of home. From the first day, New York has been home for me, and it’s been where I’ve gotten to discover my passion for filmmaking.

Filmmaker: Was studying at Columbia a useful bridge into the indie film community in New York?

Nathaniel: The indie film community in New York is very welcoming, especially after having gone the film school route with many professors and colleagues. For me, film school was necessary. There was no training I could have done back home and I was never exposed to world cinema in Pakistan. As a student you are already part of an industry, and you have to make that bridge happen from school to the real world as soon as possible because if you don’t, you miss your chance. This is what I now tell my students — I just started teaching at Columbia this year and I start teaching at NYU next week.

Nathaniel: I was the only woman on my set of 40 men in the middle of desolate Pakistan in mid-winter. As a director, I had to be open to the elements in this road trip film — how the light shifted in the landscape, how the weather would unfold and how I could use it in the frame. The landscape is a major character in the frame. At the same time the on-ground situation was dynamic because of sectarian tensions and below freezing conditions — we had to be very open while shooting across vast distances to keep the production moving. After shooting, we edited for almost a year because I was always trying to raise money in post-production. We always had just enough money for any one particular phase, but we had to keep going because the clock was ticking. The momentum to keep going is so important to avoid getting stuck in post-production hell, which is even worse than development hell.

Filmmaker: Did you experience development hell writing this script?

Nathaniel: No, the film practically wrote itself because I had it in my mind for so long. The script was the easy part. After is where the real struggle began — finding funding for a film with two women leads by a first-time brown female filmmaker from a country that is not known for cinema. It was a ten-year struggle. I can’t tell you the kinds of things I heard or things I had to do, but the bottom line is that it was the hardest battle ever. A movie with two brown female leads, with no recognizable star power, who aren’t Bollywood stars, with no white guy or recognizable traditional hero, plus with subtitles…there aren’t really people in the U.S. looking for this kind of project. After spending so much time searching for funding in New York, I shifted my gaze to Europe, where the production funding ultimately ended up coming from. My next film is a fantasy sci-fi film with a brown female lead, so I have my battle carved out for me, but I’m not going to drop it just because it’s hard.

Filmmaker: Have you always been this relentless?

Nathaniel: I grew up in a middle-class matriarchal family in Pakistan. I’ve seen so many women fight for the sake of their children, who just don’t give up, and that kind of spirit is where I draw my strength from. It’s important to say that these kinds of films only get made because of support, so I’m very grateful to my family, especially to my husband and my eight-year old daughter.

Filmmaker: Was selling the film just as hard as financing it?

Nathaniel: It’s a difficult marketplace for foreign language films. Sales agents look for genre films with star power. But so far, we’ve sold the film ourselves to the U.K., Turkey, and a few other countries. We’ve had a successful run in Pakistan and we are looking to release in the US. For the first year of the film’s life, we’ve done well, and we’ve had a lot of love from many different audiences, which has given us the courage to keep going.

Filmmaker: Do you want to also produce your next film?

Nathaniel: I didn’t want to produce this last one and I don’t want to produce my next feature. It’s tough enough just to be on the road directing the film. I found myself conflicted so much wearing the two hats simultaneously, so I’d like the benefit of having a partner with me from day one supporting the business life of the film. It’s bittersweet because in this current climate as a filmmaker, if you really want to create your own brand, you have to be in control of it as an entrepreneur.

Filmmaker: In creating your own brand do you feel obligated to tell South Asian stories?

Nathaniel: Your work reflects your unconscious desire and you draw from your own experiences but you also want to explore new places, so I go where my story takes me, which can be anywhere — it could be outer space. My next film unfolds across time and different places, and none are South Asian places. I’m just writing it now, but I hope to direct it as well. I’m also on the scout for other material to direct— it doesn’t matter if it’s a big commercial project or not. It’s about the story — if it moves me in some way, I’ll jump on it.