“This is Supposedly the Age for Things to Come Together More…”: Sabrina Dridje on Business and Technology 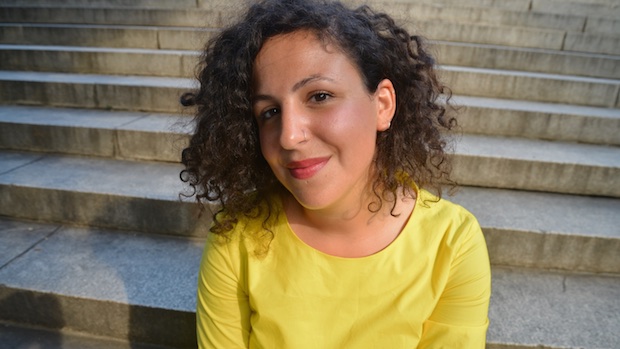 Made in NY Media Center by IFP, Sabrina Dridje

I’ve owned seven different glasses since my first pair at eight years old. My short-sighted impairment has gotten worse over the years, but I’ve recently grown out of my astigmatism. Looking through someone else’s lenses and accurately guessing the prescription is my favorite party trick, even though I’m probably just impressing myself. Nevertheless, I’m well-versed in the topic of being near-sighted. Though it’s not uncommon, being near-sighted feels like a significant trait, impacting how I see and, depending on whether I wear glasses or contacts, how others see me. I like how being near-sighted is described as a “defining characteristic” in Yorgos Lanthimos’s newest film The Lobster, which had it’s World Premiere at Cannes earlier this summer. It certainly feels distinctive for me.

The Lobster presents a society obsessed with love, or rather, with finding a partner who shares the same “defining characteristic” and calling it love, as is the case when Colin Farrell’s near-sighted character meets the short-sighted one played by Rachel Weisz. Their relationship is contingent upon this one similarity, and so they are compatible. In the film, Lanthimos depicts a bleak portrait of human connection measured in shared characteristics, in nosebleeds or lisps or in being near-sighted.

Funnily enough, a pair of black-rimmed glasses caught my eye when I first met a fellow near-sighted compatriot. We were meeting as colleagues at the Made in NY Media Center by IFP, and I felt instantly at ease with her, both in our dark-rimmed frames. In a way, I see how even the most banal shared characteristic can feel more meaningful than its superficiality suggests. When living in a foreign country, these arbitrary commonalities are sometimes the only way to relate to others. But Sabrina Dridje, having grown up in France and the U.K., has no problem relating to people in New York, and it has nothing to do with her unmistakably curly hair or South England accent…or for being near-sighted.

Relating to others, a characteristic far less visible, is probably the most defining thing about Dridje. When she decided to replace her characteristic dark-rimmed frames for contact lenses earlier this year, the connection between us wasn’t severed, as would be the case in the world of The Lobster. She remains close despite the small changes or the big ones. I wish I could say what I share with Dridje is unique, but I know how she connects with others in similar ways. If you are lucky enough to meet her, you’ll know what I mean.

Dridje was a Business Affairs Manager at Hanway Films before working as a freelance producer and consultant in London. Upon moving to New York in 2012, she worked at IFP’s Independent Film Week before she was hired to manage Community Engagement at the Made in NY Media Center by IFP. Developed through a partnership between IFP (also the publisher of Filmmaker) and The Mayor’s Office of Media and Entertainment and the NYCEDC, the Media Center is a 20,000 square foot space in DUMBO, Brooklyn where storytellers and media/tech entrepreneurs from multiple disciplines create, collaborate, connect, and incubate. Now as the director of the space, Dridje continues to bring together innovators in film, video, gaming, technology and content creation to support the development of their start-ups and projects. She received a Bachelors of Science and a Masters degree from the University of Warwick.

What about business appeals to you?
I feel that I’m an analytical person, and I like problem solving. I love math because the problems have logical solutions, and I think part of being a good business person is figuring out the most efficient solution to a big problem, everything from money to relationships and people. So much of business is psychology actually — trying to figure out what people want and what you have to offer. Negotiating that, for me, is so interesting.

How did you plan to combine business with a film career?
My path hasn’t been a clear intention. It was a step-by-step gradual realization. But, it’s always been important for me to think about balancing a business career whilst also working in the cultural sector, which is difficult to do. After my Masters, I found film sales by accident, which I liked because it combined analysis and film and business. After that, I knew I didn’t want to be a film producer because I saw first hand the difficulty of raising finances. You have to really want to do it, and I realized that my passion for it was not there. At the time, in London, the logical next step was to go freelance. As my network grew across other cultural areas like music and digital art, it escalated, and without even noticing, I started moving away from film, toward more exhibition work. Ultimately, my job now is business-focused but feels very much cultural via media and tech and within a non-profit organization.

You’ve been working to shape the Media Center since it opened in 2013. Now that you’ve been promoted to lead the space, what’s a new challenge?
It’s an exciting opportunity and challenging to figure out my new relationship with the team, which I don’t want to change too much. It’s about figuring out how to be a good leader, a good colleague, and a good peer all at once. It’s organizational behavior. It’s also exciting to be able to translate my experience into plans that allow us to continue to grow.

What does being a good leader mean?
My personality is not one of authority, so I like to think that my approach is different. There’s the balance of aspiring for respect and trust, whilst also wanting to inspire and set a good example.

And hiring the right people?
Interviewing is such a human thing. It’s like a first date. You sit down with someone and within the first second, you know if they are going to be a good culture fit. But in an interview, even if you like someone culturally or personally, you still have to ask random abstract questions to see how the person would deliver for the job. It’s not about the questions themselves, it’s about the solutions the person might apply to a specific problem. You have to figure out how someone’s analysis system works.

How often do you misread people?
I like to think that I’m quite good at reading people and being empathetic. It’s such an intangible attribute, but I’m grateful to have it. If anything, I think it’s the single skill that’s helped my career most. That, and the kindness of strangers.

Do any culture differences in New York make it harder for you to read or connect with people?
I really relish meeting totally different people and learning to understand who they are. In London, there are the familiar historical contexts with people, but in New York, my historical context starts with when I moved here in my late twenties, which is refreshing, but it can also feel like there’s a missing piece. In my heart, I miss France and the French side of my personality so much, but the thought of working in France is just not an option right now in my career. Sometimes I look at the map of the world and think where I’d go next. But when I think about where else I’d live, I think it’d be really hard to find a place that combines all the things I love, and that New York has.

What drew you to New York in the first place?
London was great, but I felt like I had done so much there and was feeling restless. The impulse that drew me to New York was so visceral, and the feeling when I first landed in New York is a feeling I don’t think I’ll have anywhere else. Every time I land at JFK, I have this feeling. It doesn’t get old for me.

Do cities or jobs typically get old for you?
I get bored quickly — not bored, but restless. When I feel like I’ve done something, I’m constantly thinking about what’s next. So, I often have to reconcile my impulses with strategic decisions.

Do you miss film?
I miss the linear perspective of making a film, of ideating with a team, and the mad rush to get it done. I miss that energy when everyone is working on a single thing. Had I not started off in film, in the job that I did, I wouldn’t be here because it’s such an amazing framework. It combines business and financing and content and strategy and marketing and arts — all the things I need for my job now.

What doesn’t feel restless about working at the Media Center?
That we’re evolving all the time. And there’s something really exciting about having been here from the beginning and now having more control over how we continue to evolve. Restlessness usually creeps in when every day is the same, and that certainly doesn’t hold true here! I love meeting new people who are doing great things and figuring out how to get them involved. It’s exciting to feel that my personal and professional life is in a shifting, transient space.

Do you know what it’s shifting towards?
When you are living your life day to day, you suddenly look back one day and it looks like separate and distinct periods of time. I hope to be able to look back and see this as the tipping point of confidence in myself — especially as a woman of 30. This is supposedly the age for things to come together more, to feel a bit more comfortable in your own skin. It’s not even that I feel completely comfortable in my own skin; it’s that I don’t care as much about what others think anymore. I’m not someone who’s good at celebrating my successes or expressing pride in myself, but the fact that I’ve been given the opportunity to help run a business, to be challenged in this way, is something I’m incredibly excited and proud about. The responsibility of it can be daunting, but it’s exciting and it feels like a significant time in my career.