“ANITA O’DAY: THE LIFE OF A JAZZ SINGER” 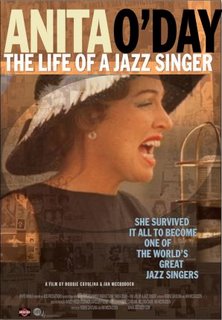 Directors Robbie Cavolina and Ian McCrudden highlight the life and work of jazz great Anita O’Day in this beautifully packaged 2-disc DVD release spotlighting one of the last living female greats from the golden era of jazz.

Known as “The Jezebel of Jazz”, Day died at 87 soon after the production of this documentary was complete. But as in her prime, Day comes off as a feisty lover of life in the doc, not shy to speak her mind and unapologetic of the mistakes she’s made in the past.

Self-described as “not a singer, but a song stylist”, Day, who is not as recognized by the layman as Ella Fitzgerald and Billie Holiday, became known as more than the “girl singer” in the big band era when she went against the stereotypes and moved her body while she sang, along with giving passionate renditions which gave her a hip style that wasn’t seen in performers before her but is certainly apparent in many since.

Using archival footage and interviews from friends, musicians, jazz enthusiasts and Day herself, the film chronicles her life through her music. Though she had a long battle with heroin, which included an over dose in 1968, Cavolina and McCrudden focus less on her demons and more on the indelible mark she left on not only jazz, but the arts itself (she’s mentioned in Jack Kerouac’s On the Road and in 2006 her music was rediscovered by a new generation when John Cameron Mitchell included her song “Is You Is or Is You Ain’t My Baby” in Shortbus). Most of Days’s performances in the film are shown in full, including her rendition of “Sweet Georgia Brown” at the Newport Jazz Festival in 1958, which is immortalized in Bert Stern’s doc Jazz on a Summer’s Day.

If you can’t get enough of Day in the doc, disc 2 includes 13 TV performances from Day, and there’s a 32-page booklet with essays from author James Gavin and the Wall Street Journal‘s Will Friedwald. And if that’s still not enough, you can get the Deluxe Limited Edition that includes a 144 page coffee table scrap book of many of O’Day’s clippings through her career. Learn more about the film and how to purchase here.

If you love jazz, this is a must have.