The Studios “Are Wanting a Strong Female Perspective”: Pamela Ribon Talks Novel and Television Writing on She Does Podcast 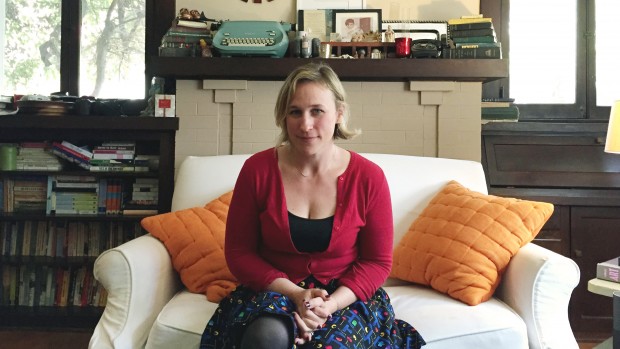 by Elaine Sheldon and Sarah Ginsburg
in Filmmaking, Interviews, Screenwriters, Screenwriting
on Aug 26, 2015

Pamela Ribon, She Does Podcast

Pamela Ribon is a television writer, screenwriter, best-selling novelist and all around hilarious human. She’s been a writer in comedy rooms for both network and cable television and is the author of four novels. NPR called her new memoir, Notes to Boys, “brain-breakingly funny.” Ribon has developed original series and features for ABC, ABC Family, Warner Bros., Disney Channel and 20th Century Fox Productions. She recently finished working on a feature for Walt Disney Animation Studios, and she’s currently writing for Sony Pictures Animation on an upcoming feature. Ribon started writing on the web in 1998, before most people even knew what a blog was. She has been building her audience ever since, breaking the internet with “Barbie F*cks It Up Again,” among other posts. On this week’s She Does Podcast, we talk about standup comedy, how to make your work go viral, and why it’s important to mind your our beeswax and find your own fun.

Based on her experience with Disney and Sony, Pamela says major studios are looking for new perspectives.
What they’re wanting is a strong female perspective. I am surprised all the time that I’m in meetings where people say “No we want it to be more about girls and their friendships and why they’re different. And the boys will just watch it, don’t worry about it.” Just two years, I’d never heard that. It was, “The girls are going to watch anything that’s good, so how are you going to entertain the boys?” I love that now we’re looking to make sure that girls know from the beginning that there’s nothing different about them.

It’s okay to not have a long-term plan when making your art.
I’m not a five-year plan or even a two-year plan kind of person. I feel like that’s how you set yourself up for massive disappointment. It’s so hard to imagine what will happen to you next week. I find myself in jobs where I’m like, “How did I get in this room? What am I gonna do today?” When something seems hard that makes me interested in it more. So I sit here asking you the same questions: “How do you know it’s fun and it’s not the hardest thing you’ve ever done?” Because it’s both, right? It’s fun because it’s the thing in your heart that needs to happen

Pamela’s blog has gone viral several times. Most recently, when she wrote “Barbie F*cks It Up Again,” a comedic take on the children’s book, Barbie: I can be a Computer Engineer
I couldn’t stop thinking about it so I asked Helen Jane if she’d scan the book so we could write about it. I wanted a hashtag. I wanted memes. I wanted people to know about it because this is a book that a girl could read and not know it doesn’t have to be like that. This is a case where you can say, “How do I make comedy work?” I was strategic with this. I wrote it on a Wednesday but I waited to post it until Monday. I posted it with the tweet, “Internet, get ready for your thing to be super pissed off about today.” I called it “Barbie F*cks it Up Again.” I knew that if I did this right it would go viral very quickly. And it took maybe three hours for my server to break, and for it to be hosted on Gizmodo because I couldn’t handle the traffic. That’s years of learning your audience.

On the process of writing novels, with non-fiction elements.
With the novels, each time, there’s something in it that’s about either what I am going through or what I just went through. Then you have to sit with this for years and edit it over and over again. I think, “Why did I do this to myself?” When you have all that inside of you, that’s what you’re going to end up writing. It’s going to come out in everything, so why not get it out in one thing where you can contain it. I find that when I’m really nervous about something and I want to put it in a drawer, that’s when it’s ready.

Find your own fun.
“Mind your own beeswax,” that’s what my mom used to say. Other people’s plates look interesting and often look like they’re getting more food than you got, but you don’t know their story. You don’t know how hard it was for them to get to that day. Wanting what other people have will never get you what it is you want, because you’re not spending time finding your own fun. It’s not fun to be jealous of people. And it’s such a waste of time because nobody has the same story. You can take the craziest route if you just follow what’s interesting to you.