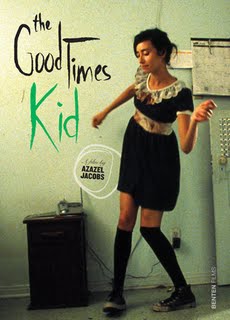 Before there was Momma’s Man there was The GoodTimesKid. In Azazel Jacobs’s second feature you can see his style beginning to take form, meshing a punk-rock attitude with cinema influences as wide ranging from Chaplin to Jarmusch.

In The GoodTimesKid Jacobs and Drama/Mex director Gerardo Naranjo both play men named Rodolfo Cano. Both men learns of the other when a congratulation letter of enlistment in the Army is sent to the wrong Rodolfo (Naranjo), leading to the other getting drunk and into fights while Rodolfo II gets better acquainted with Rodolfo I’s (Jacobs) girlfriend, Diaz (Sara Diaz). Spanning 24 hours in Los Angeles’ Echo Park, the film isn’t as much a commentary on war as it is a funny look at loneliness and the hunger to find companionship in the world. Jacobs tells the story through small spurts of dialogue while Naranjo’s blank looks matched with Jacobs’ destructive tendencies make for subtle comedic moments.