The Seedy Side of LA: Michael Curtis Johnson on Hunky Dory at IFP Film Week 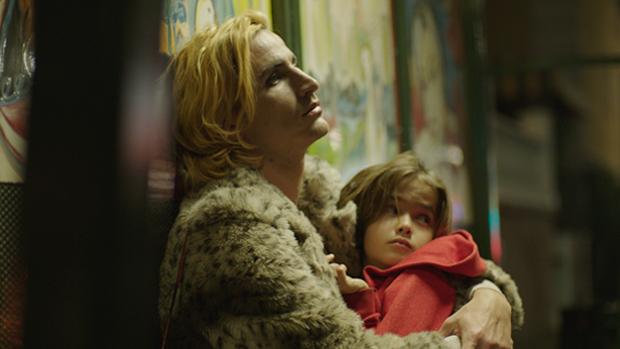 by Michael Curtis Johnson
in Festivals & Events, Filmmaking
on Sep 18, 2015

[This is the first of two guest blog posts from Michael Curtis Johnson, who will be participating in Independent Film Week with his feature Hunky Dory.]

Los Angeles. Sunrise. Goodbye kisses. This will be the longest I’ve been away from my wife and two daughters since they were born. I’m catching a flight to New York for the second phase of IFP’s Narrative Filmmaker Labs and Independent Film Week with my first feature film Hunky Dory, a drama about a glam rock dilettante and his eleven-year-old son.

IFP’s Filmmaker Labs are a year-long mentorship program that helps first-time directors and their teams through the entire post-production process from editing to distribution. Independent Film Week is an annual event that connects content creators with the industry. My film is one of over a hundred projects, both narrative and documentary, in different stages of development that will participate. My co-producer/co-writer/lead actor Tomas Pais and I will give a marketing presentation to our fellow IFP Film Lab participants and mentors not long after we get into town. Then, we’ll have a series of meetings with industry professionals and festival programmers throughout Independent Film Week. Our trip will culminate with a screening of a short excerpt from our work-in-progress at a showcase sponsored by Rooftop Films.

I wasn’t one of those kids who ran around their backyard shooting films with their friends. I always loved movies, but I never saw filmmaking as a way of life and certainly not “a living.” I went to college on a football scholarship and my life changed one blistering cold Saturday morning in a film appreciation class at Eastern Michigan University. The professor screened L’avventura. You’d think watching an old black and white film with subtitles at 9 AM with a high gravity hangover would be incredibly somniferous, but I was captivated by the film’s look, feel and Antonioni’s approach. I walked out of that screening breathless, I inhaled a plate of chili-cheese fries at a local Coney Island and decided to be a filmmaker.

A couple months after moving to Los Angeles, I met the woman who would later be my wife. She was born and raised in Echo Park. Through her, I saw a Los Angeles unlike anything I had envisioned, a city where people live imperfect lives and just try to get by. I didn’t own a car for most of the last decade and, yes, I actually walked in LA. Walking gave me a great chance to see the hidden neighborhoods away from the main roads and get to know interesting people outside the film industry. Like Charles Bukowski, John Fante and Ken Mackenzie (The Exiles) before me, I am inspired by this bittersweet and seedy side of town.

After I graduated from the directing program of the American Film Institute, I was financially crippled by student loan debt. I was writing spec scripts that I really didn’t believe in for a spec market that really doesn’t exist anymore, shooting no budget short films that no one would ever see and struggling to find work in and out of the film industry. But, I had also gotten married and had two amazing children. I was fulfilled in my personal life, but frustrated with my creative one. My repeated professional disappointments were really starting to affect my personal life. I wondered if I should just focus on being the best dad and husband I could be and put all this childhood nonsense behind me. Maybe if I would have made movies in my backyard when I was a kid, I could have gotten it out of my system.

My wife wouldn’t let me give up though. She supported our family on her social worker salary, while I stayed home with the kids during the day and worked on my projects at night. She never belittled me for my lack of professional success. She always believed in whatever the hell it was I was trying to do. I decided that it was time to — as a character in “brand name”filmmaker Kevin Smith’s Clerks so eloquently muttered  — “shit or get off the pot”.

If my debut was also my swan song, so be it.

Tomas Pais and I channeled our LA experiences into a project that took elements from both our lives (like my relationship with my kids and his relationship with his own dad) to create a tale about an unconventional father who can’t grow up and let go of his rock-and-roll dreams. We begged friends and family for funding and favors and set out to tell a tale about a man who walks in LA, struggling with the fear of mediocrity and raising a child while coming-of-age himself.

The film was shot in eleven days on a shoestring budget. We didn’t know just how in over our heads we were when we started production and how lucky we would be to come out on the other side with something that we could be proud of. Hunky Dory is a special film, exquisitely shot by our audacious DP Magela Crosignani, with a masterful lead performance by Tomas and a breakthrough supporting performance by twelve-year-old Edouard Holdener.

I was thrilled when Hunky Dory was accepted into IFP’s Narrative Film Lab, but, candidly, I wondered if IFP was little more than just a gatekeeping institution of independent film. I was skeptical about how much they could actually help in our creative process. But after the first day of the Labs, I realized not only how integral IFP is in discovering talented filmmakers, but how essential the organization is in fostering their work, helping them strengthen their voice and preparing them for the treacherous business of independent content creation. You reach a point in the post process where you lose objectivity and our lab mentors really helped me see my film with a fresh pair of eyes. Their notes were straightforward and respectful of my vision. I also learned the ins-and-outs of the post process and got great one-on-one career advice from seasoned professionals. I met an eclectic group of fellow filmmakers in the Lab with innovative projects of their own. I left the first phase educated and inspired, grateful to my mentors and in awe of my fellow participants. It was both a humbling and inspirational experience and Hunky Dory is a much better film now than I ever could have imagined.

Your life should inspire your work, not the other way around. I never would have or could have made Hunky Dory if I hadn’t had the support of my family. Being a father has made me a better storyteller and brought focus to my work. Whether it’s parenthood, traveling and/or spending time with the people you love, you shouldn’t put any part of your life on hold for you art. Life is what takes your work to the next level. You don’t give up any part of yourself for your work or your family, you just need to find balance.

New York. Sunset. As my plane makes its final descent into JFK, I’m excited for what comes next and eager to learn more. I look forward to sharing my Independent Film Week stories with my wife and my girls (and the rest of you) when I return to Los Angeles.