NYFF ’15: In The Shadow of Women and No Home Movie 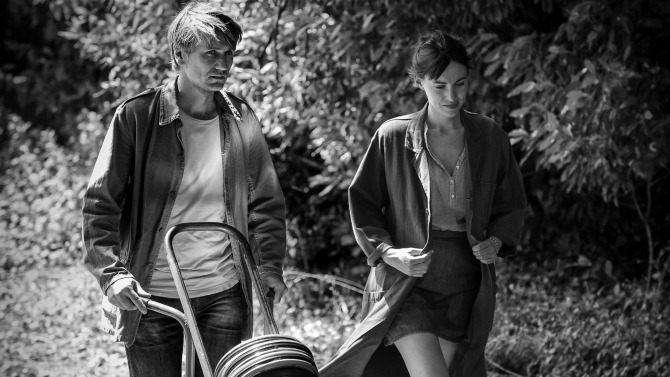 In The Shadow of Women

by Sarah Salovaara
in Festivals & Events, Filmmaking
on Oct 2, 2015

Slotting a festival schedule is one of those tasks that falls subject to a number of outside variables, namely, filmmaker and celebrity availability. One would figure that less thought goes into structuring a press and industry schedule, where 10 AM screenings are decidedly void of glamour, and yet the occasional revelatory double feature presents itself, in which two disparate filmmakers appear in dialogue. Case in point: back-to-back screenings of Philippe Garrel’s In the Shadow of Women and Chantal Akerman’s No Home Movie proved a joint exercise in obstruction, fostering a shifting interplay between objects and protagonists, despite their very different surroundings.

Garrel isn’t exactly treading new territory with In the Shadow of Women; like last year’s Jealousy, it’s another exploration of struggling artists and infidelity. Manon (Clotilde Courau) works with, or rather, under, her husband Pierre (Stanislas Merhar), a struggling documentarian who beds an intern (Lena Paugum) at a local archive to assuage his ego. “Don’t blame me for being a man,” the narrator (voiced by Louis Garrel) reasons. Garrel delights in pushing his gender politics to the brink of offense before reigning them in with a carefully considered double standard: it follows that Manon herself is also having an affair.

Barbs aren’t enough for Garrel, so he begins to insert literal obstacles into the dialogues between Manon and Pierre, and Pierre and his mistress, Elisabeth. When Pierre joins Manon in their editing suite, the camera catches his likeness in a sliver of a mirror hanging on the opposite wall. Garrel stays in wide as the two spar over empty space, the mirror hanging there like the unspoken third party in the room, reflecting all of their anxieties and doubts.

Later, when Elisabeth gnaws at her lip, debating whether or not to tell Pierre of Manon’s affair, Garrel imbues the bedroom setting with near comical blocking. She’s placing a tray of tea between them; he’s lying down, then sitting up, as the narration sounds from Elisabeth’s perspective, “She cheats on him and I suffer.”

Garrel is not so much a romantic as he is a pragmatist; he knows love is never enough to keep someone around, and that affairs actually have little to do with sex. For starters, we never see Elisabeth and Pierre, nor Manon and her lover, in the act. What we do see is an attempt to draw out attention in a partner other than a spouse, to push away and ignore the obstacles as they crop up first in their marriage, and then their affairs.

Chantal Akerman’s No Home Movie has been perhaps unfairly besmirched by critics who find its cosmetic consistencies with Jeanne Dielman to reflect an unfulfilled promise rather than a clever play on expectations. Yes both concern a housebound woman who spends a good chunk of her time in the kitchen, but No Home Movie, more than anything else, is a document of literal barriers.

The first line that is drawn (not unlike Jeanne) is between Nelly Akerman’s apartment and the outside world. Even when Nelly is accompanied by an aid into the outdoors, the camera never follows. Chantal allows herself to return to a broken chair in the backyard like a talisman, framing it from her herher’s terrace, but never inching any closer. When she is away from Nelly’s house, capturing barren landscapes, a car window likewise obstructs her lens.

Chantal often films the pair’s conversations at the kitchen table, using her own body to obscure her mother’s, and at times even letting the camera’s charger slink into frame. Billed as a portrait of Nelly’s final months, No Home Movie is nevertheless largely autobiographical. Through the women’s talks, we learn of Chantal’s childhood and less so about her mother’s escape from Auschwitz during the Nazi occupation. When Chantal films her own computer screen during Skype calls with Nelly, we catch not only her reflection, but a glimpse of the items on her desk. (She smokes American Spirits if you were wondering).

During one of these calls, Chantal explains to Nelly that she wants to film her to demonstrate that “there is no distance in the world,” that the miles between them are collapsed by an internet connection. And yet the same distance that hangs over a call between Brussels and New York is felt when Chantal films her ailing mother asleep in her arm chair, with glacial objectivity from the other side of the room.