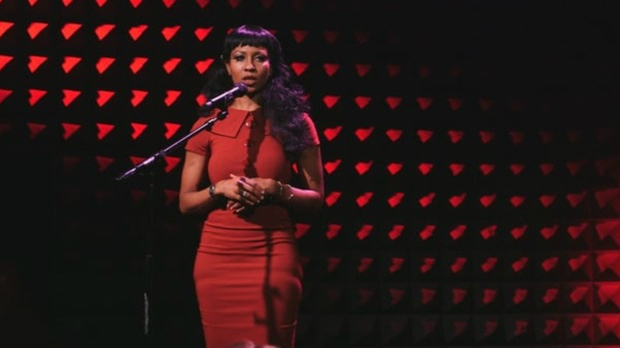 by Lauren Wissot
in Festivals & Events, Interviews, Producers
on Nov 12, 2015

It was a little over half a decade ago that I read at one of Audacia Ray’s intimate Red Umbrella Diaries events on the Lower East Side. Since then this sex worker storytelling series founder – whose resume also includes stints as a bodyworker, escort, and executive editor of $pread magazine – has become one of the foremost voices of sex work advocacy through her Red Umbrella Project (RedUP), harnessing the media to de-stigmatize the oldest profession in the world. Now, after waging battle against violence and for the public health of those in a long-marginalized industry, she’s executive produced The Red Umbrella Diaries – a feature based on a Joe’s Pub performance from some standout Diaries alums – that’s having its New York City premiere at DOC NYC.

So what’s the journey been like from the Happy Ending Lounge to here? Filmmaker spoke with Ray about her crusade to not just change the conversation around sex work – but to put it firmly back in the hands of working girls and boys (and trans-girls and trans-boys).

Ray: The Red Umbrella Diaries was a monthly storytelling event that I produced at the fantastic but tiny Happy Ending Lounge on New York’s Lower East Side for five years. One night after a show in the spring of 2013 a bunch of us, including the filmmakers, were sitting around and fantasizing about the idea of doing a bigger show. It went from “What if” to “Let’s do a big show at Joe’s Pub and make a documentary!” in a matter of minutes. Though I’d made The Bi Apple, a comedic short called Dacia’s Love Machine, as well as two different web video series, I didn’t want to direct the film because I was in charge of producing the show, supporting performers to develop their stories, raising the money, and also would be in the film telling my own story.

Filmmaker: You’ve played the Portland Film Festival and are now screening DOC NYC, both of which I assume host liberal-leaning audiences. Do you ever worry about preaching to the converted? What is your ultimate outreach strategy for the film?

Ray: Liberals are not necessarily on board with the cause of supporting the rights of people in the sex trades. In fact, I find that this issue brings out a lot of patronizing ugliness in progressive people (especially those who perceive themselves as meaning well), and in some ways it’s actually fun to bring that out in the open and to challenge it. A lot of media about sex work is pretty simplistic, with messages like “Sex workers are people, too!” or questions like “Are sex workers exploited or empowered?” (The short answer is yes.) We hope to push the conversation further than that. Ultimately, we want audiences to tangle with the complex and sometimes conflicting stories we tell in the film about family, economic necessity and the idea of choice, what it means to talk about all this publicly, and who can do that.

Filmmaker: You present a wide-range of experiences in The Red Umbrella Diaries. Performers include everyone from Ceyenne Doroshow, a black trans woman (and author of Cooking in Heels: A Memoir — which she wrote while in prison on a prostitution charge — and which you helped publish) to white male escort Dominick, who spent his 20s as a kept boy. I think showing this diversity is important not just for mainstream audiences, but also for the sex workers themselves. After all, most high-end callboys (and girls) like Dominick have probably never even met a street worker like Ceyenne (and vice-versa). Is it part of your mission to break down these mostly class-based hierarchies (and there are most certainly hierarchies, as strippers often look down on prostitutes, dominatrices on both strippers and prostitutes, etc.) amongst the sex professionals who participate in RedUP projects?

Ray: In the film, Essence Revealed refers to this as the “ho hierarchy.” It’s enforced both by our culture at large and by the internalized whorephobia that lots of sex workers hold. You’re right that most sex workers lead pretty siloed work lives, so it’s definitely a goal of Red Umbrella Project to bring sex workers of different experiences together to discover what we have in common — and to learn from our differences, too. As an organization Red Umbrella Project is increasingly working to focus on people in the sex trades who are most directly impacted by criminalization and violence, particularly women of color and trans women, and recognizing that though stigma against sex workers is real for all of us, it impacts some in more urgent ways than others.

Filmmaker: One of the things that most excites me about RedUP is its innovative focus on workshops designed specifically to empower sex workers themselves by teaching them both writing and media outreach skills. Do you have any plans to expand to filmmaking or classes in transmedia, perhaps giving those not so inclined to words a visual tool?

Ray: The thing I love about and am most proud of in the process of founding and building Red Umbrella Project is our ability to adapt, change, and constantly question what is working for us in the communities we serve. We believe that storytelling is a building block of social change, but the way we are using storytelling is changing. Our modes of storytelling depend on the skill sets and interests we have within the community — all of our programming is developed and led by sex workers. With the member base we have currently we aren’t focused on developing highly technical transmedia skills, but rather we consider what medium can best reach our target audience. For instance, this past summer we did a series of three spoken word storytelling workshops designed to collect sex workers’ stories about coercion in health care, police harassment, and experiences of the Human Trafficking Intervention Courts in NYC to use in an advocacy context. Ultimately, we supported a group of trans women in telling their stories during a rally on the steps of City Hall, and then myself and one of our other staff members brought the stories into our testimony at a City Council hearing on the courts. That’s a very targeted advocacy strategy that used storytelling to make an impact, and it’s working for us.

Filmmaker: Finally, since the advent of the digital age sex work has become more out in the open, even acceptable. Yet I wonder if the web’s being a hotbed of misinformation also takes us further away from the realities of these jobs. I mean, the fact that in 2015 folks are still using the terms “sex trafficking” and “prostitution” in the same sentence (albeit often for political purposes) is pretty outrageous. Does the higher visibility of sex work also make your advocacy efforts more challenging in this respect?

Ray: Making and responding to media as first a current, and then a former, sex worker has been a huge part of my life for more than a decade, starting with my own blog and my time as an editor of $pread magazine. So I’ve seen lots of shifts and been a part of making some of them (for better or worse). The way that online media functions now is through a series of reactions and think pieces, which means that most of the stories about sex work are reactive ones. Essentially, sex workers who have media platforms take a defensive strategy and respond to events related to sex work. The folks who are most visible on social media are cis white women who work indoors and are operating solo as activists, without the accountability to and knowledge of a broader community of sex workers. I did the rapid news cycle, media response thing for several years when I first became an activist and it’s exhausting, always in motion, and really difficult to get your message across in these situations. Not to mention the fact that media exposure as a sex worker can be a dangerous and life destroying force. It remains important for activists to have a quick response strategy to current events, but not all stories need to be given attention.

I find myself turning down way more media opportunities than I say yes to, and I find that a lot of the big stories about sex work and trafficking do not focus on the most impacted people as experts. Furthermore, a lot of the big news stories are racist, classist, and transmisogynistic in their development and continuation. For example, the Rentboy.com raid and shutdown this summer got an immense amount of attention, asking questions like “Is the Rentboy raid the Stonewall of sex work?,” which ignores the fact that Stonewall was led by trans women of color who were sex workers. While the flurry of articles and responses to articles went on, I couldn’t help but note that it was pretty revealing to see that when gay white men are impacted, suddenly there’s a conversation about sexual freedom (an argument I think is really damaging) and decriminalization. Meanwhile in New York, trans and cis women of color are being arrested constantly after being profiled for the crime of loitering for the purposes of prostitution, and then are sent through court-mandated therapy programs. We are working very hard to get media attention on that. Just a month after the Rentboy raid and news cycle, RedUP organized a rally at City Hall about this issue and we got a fraction of the press that the Rentboy story got. Trying to tell complex stories in the news media is really challenging, but it’s important to RedUP staff and members to work to generate stories about the issues we care about and prioritize – not to just get into an endless loop of responding to whatever is trending.