“A Secret World of Doppelgängers and Demons”: Director Stephen Kijak | We Are X 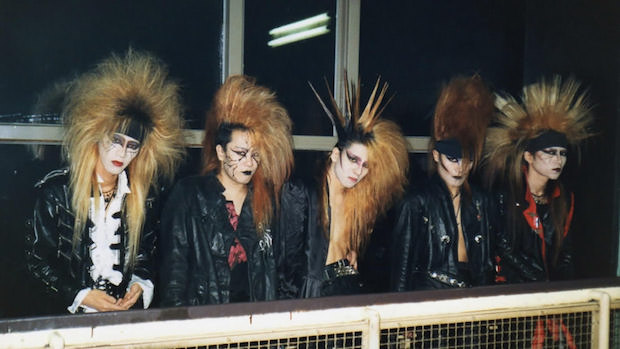 I had never heard of X Japan. When I came on board, there was a brief treatment (as well as a detailed Wikipedia page) that tells you the basic history of the band. But what was the story we would tell in the film? Beyond the standard arc, it was everything on the periphery and below the surface that was most interesting. It was a surprise discovery while digging through the archive one day that opened a door into the subterranean world of the film.

We had access to a massive video archive. The band has been very well documented, almost obsessively so. But the log was sporadic, and often I was just picking a box at random and hoping to find a gem. On one such dive into the unknown, I found a sequence of 13 unmarked tapes that turned out to be behind-the-scenes footage of an unreleased X Japan music video directed by David Lynch. This was just before Lynch directed Lost Highway and the atmospheres were wonderfully similar: A desert, smoke and flashing lights, fire, and Yoshiki, naked on a beach staring into the sun. I thought a lot about Lynch’s use of the doppelgänger and reflected upon an interview Yoshiki gave in which he talks about his dual nature; the strong, confident public figure and the man still wounded by recent tragedies, who is afraid to leave the house, who spends days crying…”So,” he explains, “I created a stronger Yoshiki, and I’m performing him daily.”

Thus, a secret world of doppelgängers and demons was born. Rock stars do often create personae and masks that can inhibit full narrative penetration, but it was great fun concentrating on this fractured and haunted aspect of a star as a morphing motif. Watch closely as Yoshiki is transformed into a superhero (by none other than Stan Lee), albeit one who is mystically marked for death. Observe as he becomes, quite literally, a doll in a cage. See if you can spot the double who stalks him through a hall of mirrors, as Yoshiki chases himself through multiple screens reflecting his own image back at himself. A fan in a unicorn mask may appear innocuous, or is she a demon, a psychic enemy to battle? The specter of death is perhaps the most persistent spirit in the film until Yoshiki dons his own death’s mask as a shield.

This is the first documentary I’ve made that has lent itself to this much subtext. Plot functions more here to push us deeper into Yoshiki’s psyche – we approach a conflagration, constantly collapsing past and present, to try and get at something deeper than your average rock doc.