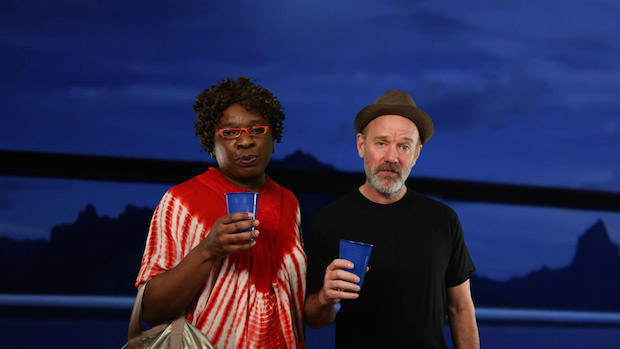 Video and performance artist Kalup Linzy returns to Sundance in 2016 with Queen Rose Family (da Stories), an installation within the New Frontier program of the festival. The exhibit features prominent musicians such as Michael Stipe and Tunde Adebimpe of TV on the Radio and was was shot, directed, edited and scored by Linzy himself. Hailing from New York, Linzy has had pieces at The Met, The MoMA and The Whitney, among other museums. In this interview for Queen Rose Family (da Stories), Linzy talks shop about how he captured the distinctly campy aesthetic of his latest installation.

Linzy: I did the hiring. I work as the cinematographer on my films and I hire co-cinematographers or assistants to help. Or I recruit students or post grads to work with me.

Filmmaker: What were your artistic goals on this film, and how did you realize them? How did you want your cinematography to enhance the filmʼs storytelling and treatment of its characters?

Linzy: I was interested in getting my videos to look more cinematic by using color correcting techniques. In addition, I used the green screen to communicate the idea of DIY collage similar to mixed media collages that will be presented on the wall. Some of the characters in the videos are grayscale against backgrounds that are in color intended to reference the early style of film tinting. Others are in natural settings with basic white balance.

Linzy: Yes. I am influenced by classic Hollywood black and white films as well as Warhol films. Soap operas, still photography. I am also interested in creating scenes that look unreal and more like a fantasy, with an artifice feel without undercutting some of the emotion and topics addressed. Other scenes in the mashup include scenes that look like typical independent films or documentary scenes intended to frame the characters in spaces that feel like real life.

Linzy: Hoping it feels like an intended experimental piece that has a sense of coming together or more to be explored and not the feel of a failed attempt at something that feels all over the place.

Linzy: I use basic three point lighting for inside scenes. For exterior shots, I wait for the sun to either be fully exposed or for an overcast. The final exterior scene usually ends up being the scene with the overcast.

Linzy: There is a scene in Conversations Wit De Churen X: One Life To Heal, which is in the installation, when my character Taiwan was confronted by his ex (Humberto Petit) with his current boyfriend (Leo Fitzpatrick) standing with him. I was struggling with keying out the green screen without losing the character’s Taiwan flower or face, which also happened in a previous scene. This was the moment I began experimenting with the characters being grayscale and the backgrounds in color. I also experimented with extreme close ups, that I started doing in Melody Set Me Free (2012) that weren’t green screen. A lot of cropping, filtering, overlaying happened with that scene.

Linzy: The scenes with the standard white balance are closer to being “baked in”. The scenes that are green screen are realized as I am shooting editing, constantly thinking it through. I also don’t use story boards. I scout a location, figure how I am going to frame the shot, using the standard long, medium, and close up shots from a angle. Occasionally, portrait shots are used.