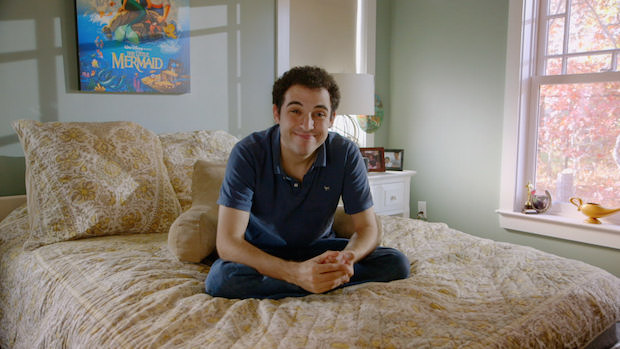 An autistic young man finds speech with the help of Disney animated movies in Life, Animated, a documentary based on the best-selling book by Ron Suskind about his son Will. The film was shot by Tom Bergmann, a cinematographer with more than 20 documentary shorts and features to his credit. Below, Bergmann discusses how he and the filmmakers worked to become “like a silent extended family” to Will and his family. Life, Animated premiered at the 2016 Sundance Film Festival.

Bergmann: I worked on another documentary with the producer Julie Goldman at the time Roger started to work on Life, Animated. So Julie knew my work and when Roger (Director Roger Ross Williams) started looking for a DP, Julie introduced us. I remember that we had a wonderful first shooting day on Cape Cod at Owen’s Disney Club. When I saw with how much energy and dedication Owen (Owen Suskind the main protagonist, who is autistic) ran his Disney-Club I felt immediately that there was a strong understanding between the two of us. During the course of shootings this bond proofed to be essential as Owen accepted us and let us be part of very emotional situations.

I am German born and had just been in the states for about seven months when we started to work on Life, Animated, so I had little ideas about the way US-productions usually work. I just did what I used to do working on films in Europe. When I started my career in Germany I was still shooting a lot on traditional 16 and 35mm film. I guess there is a certain concentration and dedication to each shot that comes from that experience. Patiently observing situations and being open for developments that are inherent in a scene are key factors to my approach. Often there is a development in a situation when you already expected the scene to be over. A little moment, an unexpected reaction – these are the little signs that make it so interesting and rewarding to work in documentary. Roger and Julie were fabulous in the way that they very welcomed the way I looked at situations.

Bergmann: One of the most important aspects for any DP is to be trusted by your protagonists. And that is even more true if you follow a young man with autism. Life, Animated is composed of many different layers. There is the backstory of Owen and his family, there is his imaginative, animated story, and there is his present life. So we were combining home-movies, photos, Disney animation and animation that visualizes Owen’s own short story and of course the footage that depicts his present life and its developments. We found that a very traditional verité approach would work best with this film as it puts a lot of emphasis on Owen’s current life – the coming of age story of a 23 year old man who happens to be autistic.

In my cinematographic approach I often act as if I am a part of the scene. I try to become a natural part of the situation, someone who’s there but no one really spends attention to me. We had the pleasure to become really close to Owen and his family. We were shooting for almost 1.5 years and after some time we become something like a silent extended family. So Owen and his family would not mind when we shared private moments and became part of ups and downs in Owen’s coming of age.

I did not use long lenses to shoot from far away but rather looked for physical closeness and thus a lot of moments have a very intimate feel to it.

Bergmann: I taught photography at a German film school for many years and I am still doing a lot of still photography. So many of my influences probably evolve out of this interest. The value of a single frame, and the ability of a single frame to transport a lot of the story. The East-German photographer Gerhard Gäbler photographed lots of day to day scenes within the GDR. His pictures are documenting but also commenting and often inhere very strange and sometimes funny situations. I am grateful when I see situations like these develop in front of my camera. There is a scene in Life, Animated when Owen tries to see if he had mail and does not find the right key to his mailbox. The scene tells a lot about Owen’s approach to everyday-obstacles but is also contains a very funny aspect that reveals a lot about his wonderful character.

Slawomir Idziak’s work with Kieslowski is another influence in the way that he used documentarian approaches for his narrative films. It can add a lot to a scene to sometimes look away from the action to provide an emotional setting for what’s happening in front of the camera. Kieslowski and Idziak were master in this regard.

From my German background I am probably influenced by cinematographers like Hans Fromm who did wonderful films with Christian Petzold (Barbara, Jerichow, etc.).

Bergmann: If you shoot for almost 1.5 years, timing may become a real issue. You don’t want to come with new people every couple of weeks and start all trust-building over. But juggling shooting days for several projects can be sometimes really hard. I worked on another long-term documentary while we were shooting Life, Animated. Julie Goldman who produced both films did a fantastic job in making sure that I could do almost all shooting days which helped a lot in keeping that relationship to Owen and his family vibrant.

We shot on Canon’s C300, which was the best option at the time. It’s a pretty light and small camera and even though it only provides 8bit of color depth it was amazing how well we could work with color in the grading process.

Bergmann: Usually I like to light very naturalistic. If everything works fine one should not even notice that there where lights used. But there are also sequences in the film that are leading into Owens inner world. We used a more excessive lighting in these instances to enter the animated world of Owen’s imagination.

Bergmann: Very early on Roger had the idea to use an Interrotron (a term by Errol Morris, who used this technique a lot for his films) for the interviews with Owen. So Owen could tell his own story directly to the audience. When we started to plan the setup for these interviews I thought immediately we should use the Interrotron (which is basically a teleprompter) to play Owen’s favorite Disney clips to him. I was shooting a lot of scenes of Owen watching his films and clips before and always tried to get even closer to him and his extraordinary reactions. The teleprompter now gave us the opportunity to be ‘inside‘ the TV – to be exactly in Owen’s eye-line while he watches the clips. When we played the first clips to Owen through the promoter we knew it would add a lot towards an emotional understanding of his deep fascination for these films. Owen’s reactions were so intense and unique and the camera looking back ‘out of the TV‘ made all the difference.

Bergmann: We color graded at Final Frame in NYC with Will Cox which was an absolute pleasure! Will understood all my intentions and was a genius in any aspect. Most of the look was already inherent in the footage. But as we had so many different threads which the story is composed of, it was a challenge to find visual distinctions for each layer (verité, animation, home-videos, photos, etc.pp). We spent a lot of time in working out the subtle developments in color and mood to enhance the emotional spirit of the journey that Owen goes through.