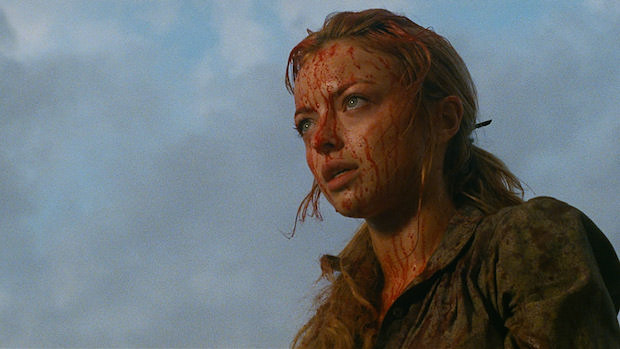 For Outlaws and Angels, seasoned DP Matthew Irving and first-time writer/director JT Moliner wanted a film that looked as though it were “excavated straight out of a vault from the 1970s.” Irving shot the film on 35mm and used Robert Altman’s McCabe and Mrs. Miller as a chief reference point. Below, Irving talks about shooting on 35, the film’s elaborate 11-minute long take and the “grit and grain” of ’70s cinema. Outlaws and Angels made its world premiere at Sundance 2016.

Irving: The two factors that led me to this job were: past relationships and perfect timing! Line producer Mykel Denis was someone I’d worked with on three previous features, and he recommended me to JT. JT and I then had a phone conversation that sealed the deal. I feel like we “clicked” immediately; we had everything in common, cinematically speaking. That first phone call made it clear that we loved the same films and appreciated the same styles. We were already on the same page – before we’d ever met. Fortunately, that’s exactly how our collaboration turned out to be. It was a rewarding, creative, and just plain fun experience.

Irving: We wanted Outlaws and Angels to look and feel as though it had been excavated straight out of a vault from the 1970s. The 70s is one of my favorite eras of cinema history, because it was an extremely experimental time: exploring in-camera zooms, new and faster lenses, new and faster film stocks – all of which came with a “rough around the edges” look. Even the most carefully-staged blocking tends to look raw and somehow spontaneous when the image size changes suddenly from a 40mm lens to a 150mm lens within the shot, from a fixed camera position. It intensifies the feeling that the action is simply taking place in front of us, and we’re merely a fly on the wall, focusing over here for this story beat, then panning and zooming over there to catch the next beat. The longer the camera can run continuously without cutting, combined with a lens position that is not directly in front of the actor’s face makes it feel more real and organic. And this, in turn, intensifies the dramatic tension when things start to get ugly. In my opinion, no other era of cinema feels as immediate and authentic as the 70’s.

Irving: From my very first conversation with JT, he made it clear that Vilmos Zsigmond’s work on Robert Altman’s McCabe and Mrs. Miller would be our primary visual inspiration, along with John Alcott’s gorgeous candlelight-drenched photography on Stanley Kubrick’s Barry Lyndon. McCabe in particular was the one film we kept circling back to, in terms of the orange glow of fire-lit interiors and the cool day exteriors.

Irving: The biggest challenge on this film was the usual one: the disparity between budget and ambition. We had a rapid-fire 18-day shoot, with a desired production value that would normally take 30-40 days to produce. Luckily, the production team was first rate. Director JT is not only the “real deal” in terms of supplying a singular vision, but he’s also very smart and decisive when it comes to rolling with the many unforeseen challenges that pop up each day. One of my trademarks as a DP is my intensive prep process, which generates a very specific shotlist shared by all department heads, so we’re all marching to the same drum. This prep work dovetails perfectly into the scheduling process. I spent many long hours with our outstanding 1st AD James Grayford (aka “Dr. Awesome”) breaking down every minute of every day, to figure out how to accomplish our lofty goals — and more importantly, to design contingency plans if something suddenly went south. On every feature I shoot, my motto is: “what could possibly go wrong?” Come to think of it, that would make a great epitaph for my tombstone someday.

Irving: Outlaws and Angels was shot on 35mm film in the two-perf format, and all of our camera gear came out of Panavision Woodland Hills. We used two Panaflex Platinums, a Lightweight body for Steadicam, and Arri 435 for high speed (120fps) photography. We chose older, softer lenses to maximize the feeling that this film originated in another age: Zeiss Super Speeds (T1.3) for our primes, and an old 25-250mm Cooke Zoom (T4). We had a shockingly young camera crew for an “all-film” show, led by 1st AC Grant MacAllister, 2nd AC Jannis Schelenz, and Loader Arlen Cooke. They were extremely well-trained and capable, and it gave me real hope for the future of our industry that these young guys still “know their stuff” in the celluloid realm.

Irving: My approach to lighting was to make it as cinematic and beautiful as possible… but always motivated. Gaffer David Busse and key grip Tyler Gendron helped me mold the directionality of the light, to make sure we could “buy it” within the world at all times: was it coming from the hearth-fire in the center of the frontier home; was it motivated by a nearby oil lamp, etc. Director JT and I were adamant that the light should never feel like it’s coming from somewhere unbelievable, due to pure logistic necessity. This became a challenge when executing some of JT’s 180-degree or 270-degree long-takes, but we always figured out how to pull it off. After all, that kind of challenge is what makes this job fun!

Irving: The most difficult scene to pull off was an elaborate 11-minute long-take within the frontier home, with no cuts to hide our sins. JT was passionate about getting each beat of this scene just right, and his passion translated down through each of us on the cast and crew. It felt like we were all gearing up for the Superbowl, when it came time to do “the shot.” A long take like this just feels different when there’s film rolling through the gate, instead of 1’s and 0’s on a data card. We set up 24 feet of dolly track around the periphery of the tiny set, and I wrote pages of notes about exactly when the camera should be zooming in, catching a moment, panning across the table to catch another moment, widening again, re-adjusting, etc. We were choreographing a dance between the camera and the actors, and it was so much fun. I think we nailed it on the second take, but because it’s film we had to bank a back-up. On top of all the regular logistical challenges of the shot, we were surrounded by thunder storms on the Santa Fe plains and had to shut down the generator (and therefore the production) for 40-minutes due to the close proximity of lightning. But we nailed it again after a few more takes and felt like we were on top of the world.

Irving: We wanted the finished look of the film to be entirely photo-chemical, so even though we completed our color correction using the latest digital tools, most of the look was “baked” into the original photography. When JT expressed to me his desire to have as much grit and grain as possible, the decision was made to shoot 2-perf for its smaller negative size. Then, I selected the fastest Kodak stock (5219 500T) for all our footage – including day exteriors – because it has the largest grain structure of any of the modern stocks. But even that grain structure is much finer than what we were trying to achieve. We wanted to emulate fast stocks from the 70s, so I intentionally under-exposed the entire film (after shooting camera tests to set the look), in order to increase the grain. In the end, we got the vintage look we were after: the entire feature has an organic, painterly texture to it. There’s no doubt this originated on film. My outstanding colorist Taylor Mahony (at Tunnel Post in Santa Monica) was able to maintain our photo-chemical look through the digital color correction process.