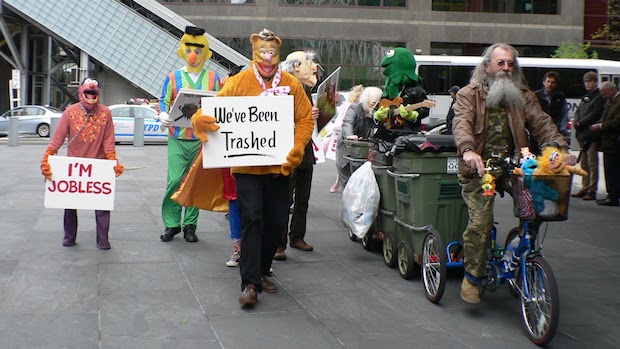 Art of the Prank

Art of the Prank documents the latest elaborate hoax from Joey Skaggs, an infamous culture-jammer who’s been pranking the media since the 1960s. The film marks the feature debut of writer, director and co-cinematographer Andrea Marini. Art of the Prank blends new footage of a prank-in-progress – his latest target: film festivals – with decades of archival material. In the interview below, Marini speaks about the style and structure of the film. Art of the Prank was selected to screen as part of the 2016 Slamdance Film Festival.

Marini: I started as both the director and the cinematographer on Art of the Prank, a feature documentary film about the notorious media prankster Joey Skaggs. The film interweaves his past work with a current new hoax in which he produces and directs a fake documentary film and then attempts to get it into film festivals. I decided to work with a talented New York City-based young DP, Ben Carey, for 3 weeks of shooting in NYC, Hawaii and Los Angeles. From the very beginning we were on the same page about what eventually became the visual approach of the movie. We couldn’t, however, work together on the whole film because of the very nature of the project. Following a current day story as it unfolds in real time brings up a lot of production issues, particularly in this case, with timing and scheduling. However, together we designed the overall style for the film and we tried to stick with it for the whole shoot.

Marini: Because we were following Joey as he developed and created his new hoax from its inception, something that had never been done before with him, and because that project was to be intercut with five decades worth of amazing archival news clips of his previous projects, I wanted the look of Art of the Prank to be as real and fresh as possible. So, working with available light was an artistic choice. Because of the need for me to be present but as invisible as possible during each of the shoots, it was also, a production decision.

For each of the key interviews, we focused on different lighting, in relation to the location and the content. For example, in Joey’s interview against a brick wall, I wanted to create an intimate situation in a “non”-place. To achieve that, we decided to have a soft light from above and to frame Joey from a slightly high angle, with two hand-held cameras. The result is an intimate and humble feeling. The use of zoom lenses was also significant. For this film, the zoom was not only a flexible lens allowing us to frame the scene or the interviewee differently during the same take, but I wanted it to be part of the visual narration, a way to stress a moment or underline a feeling, both in live-action and interviews.

Marini: Artistic and visual references are something I use in every project I do. Art of the Prank was very different for me. Lighting had to be as minimal as possible and not artificial in any way. So, the cinema-vérité style was a great reference for cinematography and camera movements. At the very beginning we had the idea of shooting some parts of the film with an old VHS camera, to connect with the archival footage, then I realized that it could have been a creative limitation rather that an additional value.

Marini: To me the biggest challenge was trying to adapt cinematography to reality. Most of the time you can’t stop what’s happening or move the “characters” to a better spot. So finding the right angle without missing the moment is a huge challenge. It required enormous flexibility, agility and stamina. All of which was great fun.

Marini: We used many different cameras, from Canon C300, 5D MkIII, 7D, EOS M to GoPro and a handycam. All decisions we made about the types of cameras were based on the circumstances – from low light situations to shooting under the radar, from hi-contrast scenes to shallow focus. We used different types of lenses as well, from Canon zooms, to Zeiss primes and Nikon prime lenses.

Marini: Since my mission was to follow Joey pulling off his new hoax in many different locations, from Hawaii (where the light can change at any moment, especially during the rainy season), to NYC and Kentucky, where we shot during different seasons as well, I had to be flexible in setting up each scene based on the available light and whenever I had control, pick the best moment of the day. It’s an interesting challenge when you are both the director and the cinematographer. You must always deal with an inner conflict; making directorial decisions based on cinematography necessities. You need to find the right balance to get these elements to coexist in harmony and lead you to the right decisions.

Marini: There wasn’t one specific scene. The whole project was a big challenge. Shooting an unfolding story with very short notice in many different locations over a long period of time can seriously affect consistency. So keeping an eye on the bigger picture is extremely important. Consistency in cinematography for a feature is critical and achieving that when you are shooting for almost three years on so many different cameras is not something you can take for granted. The way I did it was a mix of lighting decisions, camera movements, framing and always keeping in mind your style. And then transferring that to whoever is working on your project, especially when you can’t be behind the camera or in front of the monitor.

Marini: Post production and specifically color grading played a key role. Because of the nature of the project, inconsistency is the first aspect you are dealing with, and matching all the different shots plus all the archival footage is not easy. As far as the look of the film, working with Massimo Loiacono (color grading artist) and Proxima Milano (post-house) has been essential. The resulting look is a clean, natural style, with the focus on enhancing the right colors and tones, giving the film a unifying consistency and the right color dominance for specific scenes.