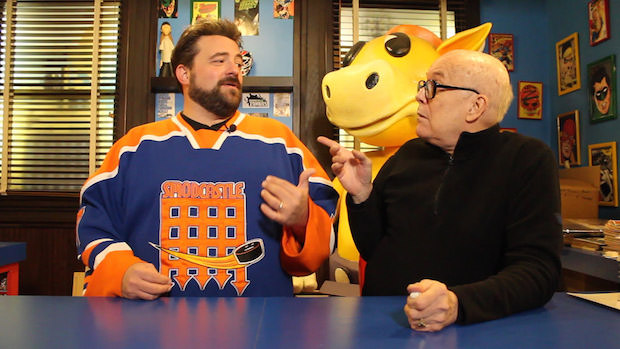 American indie film champion Bob Hawk has, to date, 28 “special thanks” credits to his name. An early friend and supporter of Kevin Smith, Ed Burns, the Duplass brothers and many others, Hawk has served as a consultant, producer and promoter for many Sundance regulars. In 2016, Hawk gets a Sundance film his own with Film Hawk, a documentary on the man and his influence. Below, Film Hawk DP David “Daps” Reinert discusses the film’s visual style and the stress of filming your idols.

Reinert: Originally, I was just brought on to the project as another shooter. The directors, JJ Garvine and Tai Parquet, were handling everything themselves, as they had on their prior documentary, Keeping The Peace. I just happened to have another Canon Rebel T3i to match the two that they were already using. After it became apparent that the film was growing in scope, they leaned heavier on my nearly 20 years of experience in studio and broadcast work to take the production to a higher level. It became apparent then that I should be named the film’s DP.

Reinert: JJ has a very distinct way he wants things to look. He wants the standard medium shot for interviews, but then he loves to have a camera off to the side capturing various angles and ranges. That allowed me to get creative and do things that I normally would not do in an interview environment. And we worked out a standard setup. Our single interview setup would be with two cameras. Dual interview setups would use three cameras.

Reinert: I have worked almost 20 years in the television field, mainly doing studio or run and gun style shooting. I have been bred to get things done quick and simple. Minimal setups. Get the best shots in a short amount of time. But even before the television career, I was a big fan of the Rodriguez school of filming. Rodriguez, Tarantino, Burns and Smith were my early influences. And here I was, filming two of them!

Reinert: Besides the fact of the slight intimidation factor of filming other established filmmakers, especially two of your early idols? However, everyone was a blast to work with and so sympathetic and warm to our cause, so it was really a non-factor. We were a small crew traveling into NYC with a basic setup, so the shoots were not a big challenge unless something was forgotten or broke on set. But then, you are in New York, you can find what you need.

Reinert: Like I said, we all had T3i’s. At the time, JJ had read an article where Ed Burns recommended the T3i as an excellent option for independent filmmakers with a budget.

Reinert: At the time, JJ had come to me with his ideas of what he wanted to do in post with the DI. Some of it was fairly complex and really would have altered the look of the shots. So, I took a standard approach to the lighting. But a lot of the film was shot in the filmmakers homes in the city, so light through windows was incorporated into the look. So, we shot everything with daylight temperature lighting. Most of the time it was a typical 3 point setup, with a window providing the fill or backlight.

Reinert: Wherever we went to film, there were always one or two spots that cried out to be used as sets. When we filmed Ed at Tribeca Cinemas, we ran into a problem. The bar inside was absolutely beautiful for the standalone interview with Ed, but finding a location suitable for a two person interview with Bob and Ed proved more difficult. We finally settled on a location in front of big plate glass window looking out onto Varick Street at 2:30pm. We blasted almost everything we had at them and just managed to get enough light to produce a nice balanced shot of our subjects, while maintaining a nice view of the city in the background.

Reinert: In the end, we really did not do very much DI on the film. Now let me go back and state that at one time early in the edit, JJ and Tai had decided that the entire film was going to be changed to black & white! Fortunately, that decision was later nixed due in part to how nice the shots looked naturally. Some shots were made b&w in the sections with Kevin as a nod to his film, Clerks, of course. There was really only one other shot that occurs throughout the story that really drove me nuts in post. It was filmed on my first day of the production, and I was still getting to know the T3i. The lighting did not quite make up for the neutrality of the colors in the room we were shooting in, and the T3i did not hold up to the task like I would have liked it to. The shot had a nice background, but the subject just did not pop like it should. A simple vignette, some grading, and a blur added to the background saved what was just an ordinary shot.