Embracing the Sublime and the Idiotic: 5 Questions with the Filmmakers of “Friends with Benefits” 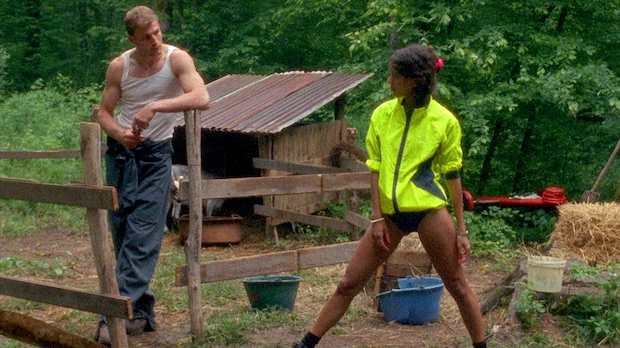 by Whitney Mallett
in Directors, Festivals & Events, Interviews
on Feb 5, 2016

When it comes to both geography and genre, the loose collective of American filmmakers made up of Gabriel Abrantes, Alexander Carver, Benjamin Crotty, and Daniel Schmidt favor radical destabilization. Their films are hard to categorize. They’re set in an array of countries, including France, Djibouti, Iraq, Puerto Rico, and underneath the US-Mexico border, and they’re not quite family drama, not quite political farce, and not quite science-fiction, though they borrow elements from each. The scenarios in their films often interrogate post-9/11 geopolitics and the legacy of colonization, but at the same time, the filmmakers approach these subjects with an absurd sense of humor that undercuts any self-seriousness.

Anchoring their early career retrospective at the Lincoln Center Film Society, which kicks off this weekend, “Friends with Benefits” (Feb. 5-11), is the U.S. theatrical release of Crotty’s feature Fort Buchanan, which played at Rotterdam and Locarno in 2015. The film, very reminiscent of Eric Rohmer, follows a group of French military wives and gay husbands navigating the distance between their partners stationed in Djibouti. Other highlights from the program include Abrantes’s short comedy Ennui Ennui (2013), featuring drones, warlords, and slapstick humor, and Carver and Schmidt’s sci-fi tone poem The Unity of All Things (2013), a feature about queer incest and particle physicists. I talked to Abrantes, Carver, Crotty, and Schmidt about their collective body of work and they chose to answer the questions in one voice.

Filmmaker: You’re working in a lot of different languages in these films: English, French, Portuguese, Cantonese, etc. Obviously there are specific histories and circumstances for each of these choices, but altogether, how does this multi-lingual texture add to the sense of post-globalism in your collective body of work?

Abrantes-Carver-Crotty-Schmidt: The plurality of languages in our films is a byproduct of our desire to work with subjects, identities, and histories that are marginal to dominant U.S. cinema. Our films are often developed from absurd or convoluted premises. For example, taking dialogue from popular American TV dramas and translating and transposing it onto a story set in a queer colony of French bohemian army wives. Or by making a pastoral science fiction set in the United States, but populated predominantly with East Asian women where the dialogue in the film is mostly in Cantonese and about particle physics and the Chinese Cultural Revolution. Or by making a film about a re-staging of the Aristophanes comedy The Birds set in modern-day Haiti. These are a few examples of how we start with highly decentered plot lines. Because of these tendencies, our films have a troubling if not anarchic relationship to identity, politics, and history.

This instability is very evident in the use of language. The dialogue is meant to be comedic in its unnerving relationship to the look of the films which sometimes feel self-serious. Most of our films are dubbed with the actors recording their voices in a hushed whisper next to the microphone. This creates a disquieting and sometimes funny separation of voice and body that highlights the artifice of performance. It has a ridiculous effect, giving the impression that we are putting words into their mouths. This ventriloquizing is further complicated by the appropriations and transpositions of different cultural subjects and narratives onto one another. We don’t think this is meant as a metaphor for the globalization but is rather a play with the expectations of what a “minor” world cinema may look or feel like.

Filmmaker: How do you approach race and casting, especially considering, I imagine, that some of these films are cast primarily from among your friends and acquaintances?

ACCS: We have often cast non-professional actors. Sometimes they are our friends and sometimes they are people we meet in the places we shoot. This comes from our interest in working with people who have a more innocent or eccentric relationship to the camera than a professional actor. At times these decisions are motivated by an ethical desire to give screen time to subjects and people who don’t appear often enough in dominant cinema, and other times, this decision is aesthetic in that it complicates the performance style of our films as we mentioned.

This sensibility is very influenced by Pier Paolo Pasolini’s obsession with casting the “saints,” “christs,” and “madonnas” in his films from the pimps, thieves, and prostitutes of Rome’s subproletariat. Where Pasolini may have had a more ardent belief that this fetishism for the authenticity of poor boys was noble, we have more conflicted feelings about our desire to make films about things beyond our immediate realm of experience.

We also have a genuine aesthetic fascination with the juxtaposition of different performance styles. Utilizing both professional and nonprofessional performers creates a dynamism where the purported authenticity of feeling is somewhat confused or destabilized.

Filmmaker: History is a subject of a lot of your collective work. Does that inform your decision to use analog mediums and 16mm for many of these films?

ACCS: We are drawn to the sensuality of analog film and the contrast that it has with the more alienating aspects of our work like dubbed dialogue, or the bombast and irony of the storylines. It also creates some practical constraints and freedoms that we find useful in structuring our predominantly “on-location” shoots. We don’t shoot very much — sometimes only one take. The improvisational method of our film productions is very apparent in our final edits. The resulting amateur feel works best when it deflates some of the grandiosity or esoterism that can feel stagnant or airless.

ACCS: The prevalence of scatological and fetishistic elements can be seen as a somewhat cautious inheritance of ’60s and ’70s libertine culture. But the prevalence of sexuality in our films also comes from a skeptical impulse that renders the political as corrupted or overshadowed by biological imperatives and the perversions of power. This again parallels Pasolini’s ultimate skepticism about his own valorization of the poor which is evident in his film Salo, where the sexual brutality of sadistic aristocrats toward innocent youths is unrelenting. We try to temper the cruelty in our films with the ambiguity of complacency and victimhood. This is perhaps the most suspect and unifying aspect of our films.

ACCS: Our films are an attempt to meaningfully depoliticize, diffuse, or obfuscate. This is not to say that we don’t constantly reference and engage with complex politicized subjects and histories in our films. We believe that “depoliticization” and “politicization” are not straight-forward concepts and that in the case of art they are especially convoluted. This lack of understanding about what political or apolitical art may or may not be is a central concern to us. Our films struggle with these moral complexities and in the process often flirt with nihilism. We continuously lampoon the bad politics of our films with a comedic force that embraces the sublime and idiotic with equal measure.