“Are We Telling Stories with Images through the Camera or from a Computer?” Ed Lachman on Shooting Carol in Super 16mm 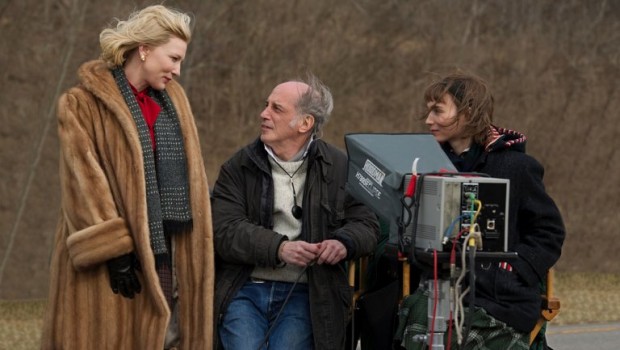 Cate Blanchette and Rooney Mara with Ed Lachman on Carol

by Alix Lambert
in Cinematographers, Interviews
on Feb 11, 2016

Ed Lachman has been the director of photography on a long list of visually stunning movies. He has worked repeatedly with director Todd Haynes. This year he is nominated for an Oscar for his work on Carol, an adaptation of Patricia Highsmith’s novel that stars Cate Blanchett and Rooney Mara. For Carol, Lachman creates a beautiful pastiche of color and texture to invite the audience into the world of New York in the 1950s as well as the emotional state of two women suddenly and deeply in love. Lachman and I sat down in L.A. to talk about Carol and more.

Filmmaker: Now that the digital intermediates offers so much possibility in post-production, I’m curious to hear your thoughts about crafting a film’s look. How much do you like to do in camera, on set, vs. how much you plan to do in post?

Lachman: We don’t know anymore what’s originated in the photographic process. Films now can be digitally manipulated later, so how do we give credibility to what’s originated in the camera photographically? As cinematographers are we telling stories with images through the camera or from a computer? Even though we might originate materials from a computer, how does one judge our work? Nothing should be off limits, but there is still something to be said about originating the photography and knowing that there’s an authenticity to the language that you are trying to convey. I would say that 98 percent of Carol was in camera. The digital work was done in the streets of Cincinnati. Part of the reason we shot in Cincinnati was because we found that as a location it could mirror New York in the late ’40s or early ’50s. That was a godsend.

Filmmaker: What sort of challenges did you face recreating period New York on location in Cincinnati?

Lachman: The weather, time and budget. We filmed it in 34 days on a low budget in the bitterest of winters in Cincinnati. All the exterior night shots with cars and taxis were done on a process trailer on location which could easily have been in a studio, but Todd wanted to shoot in the actual locations of the street to inform a sense of reality, even though I had to create light-rigging that moved around the car.

Filmmaker: What was the stylistic approach to the film?

Lachman: The idea was not to look at the time period of the late 1940’s through Hollywood cinema — film noir or melodrama — but as a lived-in reality, [with] an austere, muted, soiled look, that Patricia Highsmith’s book, The Price of Salt, took place in. So we looked to the photojournalists of the time; many of them happened to be women — Esther Bubley, Ruth Orkin, Helen Levitt, and then later Vivian Maier. America hadn’t rebuilt itself from the war — it was a very uncertain, unstable time in American imagination, with the beginning of the Cold War and paranoia about communism. The color palate of that time was very different than the saturated primary colors of the late ’50s. I referenced the photojournalists and later Saul Leiter’s use of early color experimentation with Ektachrome slides which tended towards magentas, greens, and cooler colors. There wasn’t the full spectrum of color the way we see color negatives today. So I played with the color by building saturation into the negative and then later muting it. I always like to play with juxtaposing warm and cool colors — one that advances and one that recedes. I find the cross-over contamination that you can’t get digitally. In film grain, you can get these crossovers. Color looks different in the digital world vs. film negative. Sometimes I would shoot tungsten film outdoors or exterior daylight film indoors. Todd’s brilliance is how he delves into his research to find the language to tell the story. In the book, Rooney’s character is studying set design. Todd and Phyllis Nagy, the screenwriter, changed her to an aspiring photographer, which was a great visual metaphor with which to enter the subjective viewpoint of her mind. As for why we shot on 16mm, 35mm film today is so grainless, it almost looks like digital. Going back to 16, we felt, gave the grain structure so it would feel like you could have picked up a photograph from that time and that’s the way you would have seen that world represented — through the texture of the grain.

Filmmaker: It feels alive, the film.

Lachman: The problem is, do our images become more artificial? Do we start to lose our belief in what we are seeing? You know, it used to be like the extended take gave a certain credibility of real time. Or, the device of the hand-held camera somehow created emotional realism. Well, we all know that we are being manipulated, that the form of cinema in itself is a conceit of manipulation. Now, when we sometimes see extended takes in a film, we are becoming more aware that you can stitch those shots together. So maybe when you see a film like Carol, there’s a certain, I don’t know, emotional authenticity because you know those images aren’t being manipulated in post to create the emotions of the character. If people believe in the visual style of naturalism then they’re more likely to be open emotionally than if they feel they are being manipulated. So that’s an interesting point that you bring up.

Does that change the audience’s viewing experience? If people know they’re taking a trip in a certain visual context or a certain style it maybe allows them to be more open emotionally than if they think they are being manipulated. When we’re looking at “reality” like reality television then we kind of shut ourselves down because we already know that it’s another form, another conceit of manipulation.

Filmmaker: That’s a nice reversal, that a film like Carol can be more “true” than “reality” television.

Lachman: That’s the whole point. What’s real is your emotions, not the stylization.

Filmmaker: How old were you when you knew you wanted to be a cinematographer?

Lachman: You know, the funny thing is that my father owned a suburban small-town movie theater, but I never took film very seriously. I even abhorred photography. My father was an amateur photographer. I had this weird notion, like an Eastern idea, that the image would steal your soul.

Lachman: Yes, now I’m only stealing souls. My soul has been stolen. So, I never took a picture really, it was so weird. I didn’t want to go near it, and so the first camera I ever picked up was a Super 8 camera. Then I went to Harvard for two years. I took this survey course in film appreciation with Dwight MacDonald. Harvard didn’t have an actual film program; it was under Robert Gardner’s anthropology department. And they had two courses, Film Appreciation with Dwight MacDonald and Neorealism with Gideon Bachmann, who was very involved with Fellini and Italian modern cinema. The first film that I saw that really took me away was Umberto D. [directed by] Vittorio de Sica. It was a film that was totally told through the images. By that time I was studying art history. I wanted to be a painter, and so I started to make little films — like little documentaries, portraits of people and situations. People liked the way they looked, and so they asked me if I would shoot for them. I thought, “Oh, this would be an inexpensive way of learning how to make films through other people’s mistakes. So I’ll be a cameraman for them.” And then, “Oh my god, I can actually get paid to do this.” So, I fell into being a cameraman, but I’ve always made my own films — I did a film with Larry Clark, Ken Park, and I’ve done a lot of installations and videos. That’s why my filmography is so abstract. When I’m a cinematographer, I’m a problem solver, so I come up with a solution to the problem with the director. When I direct I know there are many options so it’s a much more unsettling experience for me. Because I know whatever choice I’ve made, there could have been another choice.

Filmmaker: I’m interested in your background because I never went to film school.

Lachman: I really only went to one school that had a film [program], and it was Ohio University, and that was like an open curriculum. We were in this film house, we had Joseph Anderson, who wrote the definitive book on Japanese cinema [The Japanese Film: Art and Industry]. We just looked at films and had the equipment from the football team, you know, because we had to shoot the football games. There weren’t any really formal classes other than to look at films, talk about films, and go out and make films. That was the greatest experience.

Filmmaker: So when you complete a film like Carol, or any film that has a specific language, do you try to choose a next project that’s intentionally very different?

Lachman: I think it’s dictated by the subject matter. No subject is ever the same to the previous one. Obviously [it’s the result of] the director’s vision and the subject matter. And I still love working in documentary. I love contemporaries like Hubert Sauper’s work, and Josh Oppenheimer — people who are creating an evolution in the cinematic language of telling stories.

Filmmaker: Do you have a film you are starting now?

Lachman: Yes. I recently finished Todd Solondz’s latest film, Weiner-Dog, and I’m in preproduction for Todd Haynes’ new film Wonderstruck. I never have to worry about calling the director the wrong name, I just use Todd.

Lachman: I did, but now I want to go back to doing more of my own work. I’d like to go back and forth.

Filmmaker: What are you working on of your own?

Lachman: I’m working on a project of a book that I created for Editions de Minuit a number of years ago in the form of a photo novella. Alan Robbe-Grillet wrote the preface. I used a script that I wanted to direct and in still photographs created the narrative in a book form — it was like a fumetti in Italy, a comic book. It had the feeling of Chris Marker’s film La Jetée. I was using stills with actors as if you created frames from a film of a film that existed. I actually had actors reading their lines so it looks like they are saying the words. The Whitney Museum has approached me to create an installation and take the still images and create a film with those images.