Berlinale 2016 Dispatch #2: Midnight Special, Creepy, and A Lullaby to the Sorrowful Mystery 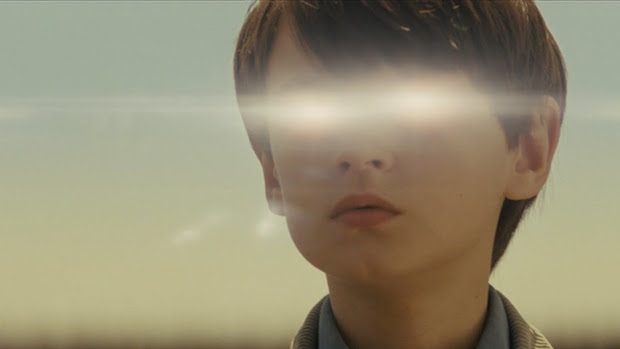 The only American narrative in Berlinale’s Competition selection this year was Midnight Special, Jeff Nichols’s cryptic homage to utopian sci-fi and early Spielbergian iconography, and something of a return to the more fantastical genre territory seen in his breakout, Take Shelter. In the film, which reportedly had a budget of $18 million and tends to look like it cost ten times that, Roy (Michael Shannon) and Lucas (Joel Edgerton) are on the lam in Texas following their apparent kidnapping of a young boy named Alton (Jaeden Lieberher), a “special child” coveted by the CIA, cultish rural religious organizations, and other sketchy, Aviators-donning men. After it’s revealed that Alton possesses supernatural powers allowing him to hear distant radio waves and intercept covert messages sent by government officials, and that he has an inimical tendency to shoot blinding bright beams of light from his eyes into other people’s faces, the film reveals itself to be an intrigue-fuelled chase picture — propelled less by action movie thrills than the open curiosities of its premise.

At the press conference preceding its premiere screening, Nichols suggested that Midnight Special represents the culmination of a methodological trajectory that he’s been developing since his debut feature, Shotgun Stories; that is, his films have been trending toward the complete reduction of expository information that would explain the contexts setting his narrative events into place. And Midnight Special is, indeed, the most extreme application of this strategy in his filmography to date. Communication is largely limited to only the transference of information that would believably not have been known by the listening character(s) until that moment, so there are none of the explainer characters that so many science fiction films rely on to keep their audiences from feeling adrift. Instead, Nichols hopes that his scenario will coast on the same appetite for wonder itself that one might experience as a kid watching films like Close Encounters of the Third Kind or E.T. the Extra-Terrestrial. He means for us to be enraptured by his images and the allure of movie magic, even as we are not necessarily paying much mind to character motivations or the trajectory of the plot.

This strategy has its virtues, and Nichols’ aptitude for spectacle keeps the picture in gear for much of its running time, but the lack of any compelling thematic allusions or subtext renders the experience something of an exercise. Nichols’ disinterest in exposition metastasizes to the film’s sense for psychological mystery, eliding any of the inquiries into crises-time thought and behavior that would’ve activated our investment in the text. Midnight Special‘s centerpiece (located, in fact, at almost precisely the movie’s halfway point) is an event both literally and metaphorically explosive, raising new and exciting questions about the nature of Alton’s condition — questions that supporting characters, when prompted, incredibly resist asking, presumably for fear that Nichols would then have to show his picture’s hand. When the climax presents similarly evocative information just in time for the movie to end, the whole affair starts to feel more like an origin story, a pilot — Nichols’s Unbreakable. The film introduces some fascinating suggestions — it is plausible, for example, that Nichols intended his science fiction epic to be an allegory about early Obama-era visions of change, a way of portraying an alternative present of sky-scraping progressivism as a reality that’s always already here — but is finally so coy that it’s difficult to bother trying to work through it.

Kiyoshi Kurosawa’s Creepy — perhaps as on-the-nose and self-aware a movie title as any since Hong Sang-soo’s Hahaha — is likewise brimming with mystery and concerned with the unknowability of human behavior, though it is also more actively rooted in the traditions of Mystery as a genre. Kurosawa here adapts Yutaka Maekawa’s 2012 novel of the same name, in which former criminal investigator/now criminal psychology professor Takakura (Hidetoshi Nishijima) gets sucked into “one last case” after a near-death experience on the job prompted him to shift his career path. Meanwhile, Takakura’s new neighbor, an unnerving man named Nishino (played by Kurosawa veteran Teruyuki Kagawa), grows uncomfortably infatuated with Takakura’s wife, Yasuko (Yuko Takeuchi), who is oddly compliant with his come ons. Kurosawa made a brief appearance in Kent Jones’ Hitchcock/Truffaut documentary last year, and his interest in the Master of Suspense is on full display here, drawing from the toolbox of, especially, Rear Window, when it isn’t recalling a more recent procedural masterpiece, David Fincher’s Zodiac.

But this threatens to paint Creepy as a more classicist and less singular experience than it is. Kurosawa’s is a film with devices such as mind-altering love serums, a Brutalist dungeon contracted from somewhere between the factories of J-Horror and German Expressionism, and an extraordinarily affable dog named Max, who may or may not be the key to this world’s salvation. As Creepy‘s narrative threads all begin to converge in its hyperreal second half, the film becomes a masterful juggling act that stretches our knowledge of what constitutes credible human behavior to its limits, to the point where it feels like the movie might break at any moment. Relationships proceed down unlikely paths, haphazard decisions are made by intelligent people who we know know better, and our belief in the trajectory of it all becomes increasingly predicated on the ambiguous interaction between an unexplained sci-fi device and the unknowable mysteries of human desire. What it ultimately amounts to is a dizzying slide into the depraved abyss where our appetites for comprehending the psychology of evil becomes one with our capacity for partaking in it — a conflation I found creepy as hell.

Just as creepy, in parts, was Lav Diaz’s A Lullaby to the Sorrowful Mystery, another of the Filipino auteur’s films haunted by the atrocities of his nation’s dire history, this time concentrating on the Spanish rule at the end of the nineteenth century. To get it out of the way, the film is 482 minutes long, a length that is not at all unusual for Diaz. In fact, one would have to say that such a duration is his “thing,” for there are even far longer works on his résumé — and while it is worth noting that the movie feels significantly shorter than that, it remains a punishing sit, as though Diaz’s default strategy for translating the pain of hundreds of years of Filipino strife is to make his viewers fast in relative darkness for an entire day. Lest it seem as though I am dogmatically opposed to the Diaz brand of cinematic method viewing, I have nothing but love for his 480-minute Melancholia, one of the twenty-first century’s high masterpieces, and think that his relatively short Norte, the End of History is pretty wonderful as well. For all the hubbub about his penchant for lengthiness, Diaz’s most irreplaceable talents have always been his unmistakable flavor of mise-en-scène (which, in Lullaby, recalls legends such as Mizoguchi, Hou, and Straub & Huillet), quasi-surrealist flourishes that complicate his sometimes dense but always refreshingly simple narrative structures, and a performance artist’s skill for distending basic gestures into highly transfixing events, abstracting and recalibrating our own bodily experiences of space and time.

Unfortunately for Lullaby (and us), Diaz opts for a dramaturgy here that foregrounds history-telling over the sort of experiential narrative games he excels at, and he currently isn’t very good at that. In a nutshell, and to be necessarily reductive, Diaz’s film is concerned with the fate of Andrés Bonifacio, a key player in the Philippines’s revolution against Spain, and the aftermath of national hero José Rizal’s execution. There are curiosities on the periphery, including a notable quartet of equine Filipino ghosts/goblins who (literally) creep in from the margins every ninety minutes or so, waking up the movie whenever they do. For the most part, though, Diaz plays it straight, especially for the picture’s first four or five hours, when characters lounge around conversing about the major historical events they are remembered for. There are nice touches, however, including a scene in which some Lumière single reels are screened for the first time in the Philippines, the aristocratic audience fleeing the projection not because of the novelty of the moving image, but because one of the aforementioned ghosts crashes the party. Diaz’s consolidation of the revolution with the contemporaneous cinematographic developments also, pretty effectively, serves to intratextually justify his own aesthetic approach in a way that his films rarely ever have. Here, he nods knowingly at the tendencies from early cinema to both film the world itself — actualities, content to contemplate the world without disruptions before the sin we call the elliptical edit became dominant in narrative construction — and to borrow from the dramaturgical conventions of theatre. Lullaby, then, can on a formal level be understood as a map charting a movement away from the theatrical and toward the purities of the actuality film, a mode and ideology of filmmaking with which Diaz no doubt places his allegiances.