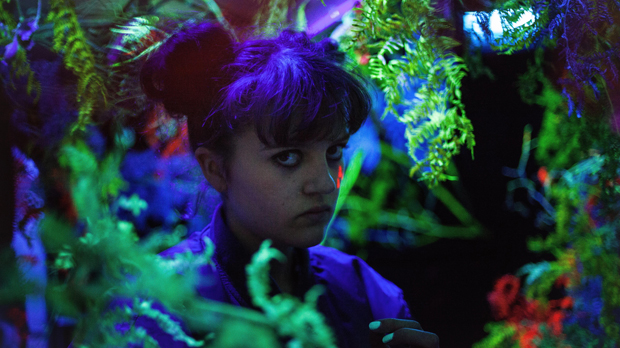 He may only have three features under his belt, but producer Olivier Kaempfer is quickly establishing himself as an central figure in London’s independent film community. His first production, director Jules Bishop’s Borrowed Time, won Best of the Fest at Edinburgh in 2012, and his second, Desiree Akhavan’s Appropriate Behavior, broke out at Sundance 2014 followed by a successful theatrical run and extensive critical praise. Now his third film, Spaceship, a family drama packaged as a trippy science-fiction story, has pushed Kaempfer and his company Parkville Pictures into new territory, both in terms of content and the production process. Written and directed by Alex Taylor, the film tells the story of a teenage girl who is apparently abducted by aliens and her grieving father’s journey into her psychedelic world of gothic adolescent angst as he attempts to find her. It has its world premiere this Saturday at SXSW.

I asked Olivier about his role as a creative producer and what distinguishes Spaceship from his previous work.

Filmmaker: Can you tell me a bit about your own background and how you came to your current career in producing?

Kaempfer: My first taste of the industry was working for a year as a production assistant for Italian producer Daniele Mazzocca in Rome in 2003. I then directed my first short film and decided to go to the London Film School in 2005 to do their MA in Filmmaking. While there I mainly directed and in fact graduated as a director. However, I knew I was becoming more drawn to producing. Film school isn’t necessarily the best place to truly understand what creative producing entails as you’re often more of a production manager, but what drew me to producing was the opportunity to work with writers and directors to develop their stories and bring them to fruition. I found it more creatively liberating immersing myself in someone else’s voice and finding my own meaning in it. I would often second guess my own stories while directing, whereas when producing I had total faith in my creative conviction, and the breadth of the producer role seemed to better suit my strengths.

So I started my production company Parkville Pictures in 2007 and luckily the first short I produced was nominated for a BAFTA. From there the momentum continued with further shorts before moving into long form, with Spaceship being our third feature. At the same time as running my company, in 2014 I was asked to take on the role of Senior Executive for the Film London, BFI, and BBC Films’ first-time feature fund, Microwave, which was in fact the fund that financed our first feature film, Borrowed Time. I’ve been sharing my time between the two roles for two years now, and it can be surreal at times sitting on both sides of the financing table, but I absolutely love the privilege of working with the most exciting new talent, and I learn so much from the interchanging producer and executive perspectives.

Filmmaker: You mentioned that producing is hard to teach, and part of that could be that a producer’s job description can change vastly from film to film. How would you describe your role on Spaceship?

Kaempfer: I think especially as an independent producer, you have to interchange between thinking like a creative producer, a line producer, and an executive producer — and often think like all three at the same time. Certainly that was the case on my first feature Borrowed Time, whereas with Appropriate Behavior our roles were shared, with my business partner Cecilia Frugiuele as producer and myself acting as an executive producer. On Spaceship, my fellow producer Nicola Bowen from Belly Productions had been on board from the early development phase, whereas Parkville Pictures and I joined the team once the film had been commissioned by the iFeatures fund (a partnership between Creative England, BFI, and BBC Films). So this was the first time I came on board a project that I hadn’t been a part of from the inception, which at first I was hesitant about, but I was so drawn to the material on a personal level. And Alex Taylor (the writer-director) had previously made one of my favourite short films, Kids Might Fly, which won a jury award at SXSW 2010, so it was a project I simply just had to be a part of.

As it turned out, the project went on another year of development before we went into production in November 2014, so the role was a creative and development one from the start. Furthermore, it was already fully financed, so I could almost exclusively concentrate on working with Nicola to support Alex and ensure he had the environment he needed to express his unique voice, doing everything possible to protect that creative bubble from any compromises that inevitably come with low-budget cinema. I also love being very much a physical producer, so I was very hands-on during the shoot, which is often my favourite part of the process. On Spaceship this was particularly challenging, trying to pull off such a bold vision on a four-week shoot, and rarely with all the resources you’d ideally need. That said, in my experience, that struggle is often where the magic happens, and that was certainly the case on this film.

Filmmaker: Given that context and timeline, what was the beginning-to-end process for this film? Were there any challenges — or successes — along the way that set it off from past productions like Appropriate Behavior?

Kaempfer: With Appropriate Behavior we were very much autonomous, as we were the sole production company (Parkville Pictures) and we had raised the private finance directly ourselves. That autonomy comes with its own challenges as well as liberties, whereas with Spaceship we were working with four separate partners — firstly our commissioning partner, iFeatures, and then its financier,s Creative England, BFI, and BBC Films. So there are many voices that you need to negotiate and manage across every aspect of the film from development straight through to distribution. This can be challenging, especially with a project that is as undefinable and distinct as this one, as often the rule book has to be thrown out. Despite those challenges, however, our partners have been incredibly supportive and brave getting behind what we were trying to do and taking the leap of faith that a talent like Alex needs. I think he’s repaid all of our faith with a film that I believe is extraordinary, and I am very proud of having been a part of it.

Filmmaker: Speaking of Alex, how would you describe the producer-director relationship on a production like this? It was his first feature — what was it like working with him?

Kaempfer: Alex is my favourite type of director, which is a challenging one, but for all the right reasons. He’s both instinctive and calculated, incredibly faithful to his vision, and not afraid to demand a dedication beyond the usual call of duty from those around him. He achieves this through infusing everyone with the special energy that comes across in the film, so that everyone feels part of it, and that it’s everyone’s story and not just his own. It’s a special talent, and he’s sensitive and intelligent enough to know when to push and when to accept something isn’t possible. Working with Nicola as a producer duo was particularly helpful, as we were able to ensure Alex always had the closest support while at the same time the wider structure of the production was never neglected. The challenge in a nutshell though is when a production is stretched to the limit, in moments of crisis you’re wrestling between the creative producer voice, the line producer voice, and the executive producer voice and deciding which one to listen to. My own default is to support the creative, but then I had to find a way to appease the inevitable strain that it causes on the rest of the production, which certainly wasn’t always easy. That tends to be our fate as independent producers, trying to get the very most out of the very least!

Filmmaker: SXSW is your world premiere. What do you hope the distribution roadmap for Spaceship to look like coming out of the festival?

Kaempfer: The distribution journey for a film like Spaceship will most likely have to be as distinct as its production journey. It’s a film that relies on the emotion and excitement that it creates in an audience, as it’s not a traditionally commercial or a cast-led film. The UK is obviously a key focus, being our domestic territory, but we’re currently concentrating on our North American distribution off the back of SXSW and have attached Bill Strauss of Bridge Independent as our sales representative at the festival. Bill has a strong track record of working with bolder and more audacious projects, and the goal will be to attach a U.S. distributor that cares for it as much as we do and is inspirited to bring it to the audiences that we know will respond to it. Although the theatrical space becomes more competitive and challenging each year for independent cinema, Spaceship really is a film whose energy thrives on the big screen, so we’ll be looking to incorporate theatrical into any release. Then beyond the U.S. we’ll have our European festival launch later in the year and look to assign international rights. Ultimately, though, with a film like this it’s hard to put too much of a concrete roadmap in place as it’s often evolving and unpredictable. SXSW will be the first time the film is seen by any audience anywhere, which is hugely exciting, and we hope the reaction will kickstart the distribution adventure we all hope for the film.