“Directors and VFX Artists Can Come Together as a Team”: Using Fusion to Composite Effects for Yellow Day 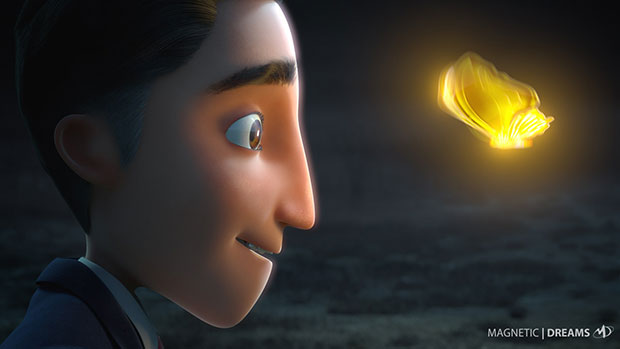 by Michael Murie
in Filmmaking, Interviews, Post-Production, Production
on Mar 10, 2016

Magnetic Dreams is an effects house based in Nashville Tennessee. With experience in both 2D and 3D animation, they did most of the compositing for the film Yellow Day using Blackmagic Design’s Fusion. Fusion is a compositing program that, since its acquisition by Blackmagic Design in 2014, has seen a significant price drop – you can get a version for free — and the release of a Mac version.

We spoke with compositing supervisor Joel Gibbs and one of the owners of Magnetic Dreams, Don Culwell, about working on Yellow Day, what it’s like to learn and use Fusion, and how filmmakers should work with effects houses.

Filmmaker: How did you get involved with Yellow Day?

Culwell: The director and writer of Yellow Day found us online, gave us a call, showed up at our door and we just started talking. We developed a relationship with them and came to the table with solutions. They were new at filmmaking and we helped to consolidate their content into a plan that could actually be done for the budget that they were offering. And we’ve become great friends actually; it was a wonderful project to work on.

Filmmaker: What was Magnetic Dream’s role?

Culwell: We created all of the animated sequences, about 30 minutes of the film. The narrative was very metaphorical. It was a very artful story and we created the designs for all the characters, all the pre-production design and all the 3D assets, all the animation, all the rendering and compositing. 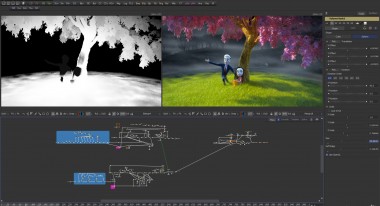 Filmmaker: Were you using just Fusion for this?

That was something that we could not do in After Effects at the time. There are a lot of reasons why Fusion was more powerful and a better environment to composite in on the film, but that was one thing that After Effects did not have, though it does have that now.

We use After Effects heavily for motion graphics, but most of our shot based compositing is done in Fusion and one of the things that Fusion is really great at is being integrated into a production pipeline.

Filmmaker: Explain how it integrates?

Gibbs: We use a program called Shotgun for our project tracking and management. It contains all the information regarding the project and the shot and the assets. When we work on a specific shot we know where the render passes are for that shot, we know where we are going to be rendering to, and we also have additional tools for shot replication.

Because of Fusion’s scripting capabilities if we have five shots that have the same setup – say it’s always cutting back to the close-up of the character – these five shots can have the same setup and the script uses Fusion to go in and setup all the shots independently with their render passes in the correct locations with the right render outputs and the right render length. A lot of automation gets the tedious part out of the way so you can hop into a shot and work on the art.

Filmmaker: How long have you been using Fusion?

Gibbs: Five or six years. We picked it up at the studio on version 6.4, and I’d played around with it before that.

Filmmaker: Were you using After Effects prior to that?

Gibbs: I started using After Effects, and I’d been looking around. I think at the time Nuke had come out, and I looked at Combustion, but Fusion is the one that I thought “Wow, this corresponds to the way my brain would want to do it with the nodes and the timeline and the spline use.” I’d been toying around with it and then a couple of jobs came up where I was talking to Don and said “I think we need to get this. We can get through this job with Fusion a lot faster than with After Effect.”

Culwell: We had recently come off a film where we had composted everything in After Effects, so we had a direct comparison to using Fusion to the time we had with After Effects. With color management there’s some major differences between Fusion and After Effects. With After Effects you can work linear through the package, but it’s not really set up for that and you have to tell each file what the color profile would be, which is pretty significant in a professional work flow. 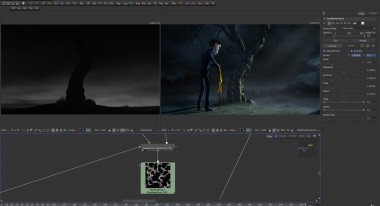 Filmmaker: Did you find it pretty easy to pick up Fusion?

Gibbs: I think that the basics of it were fairly easy. Learning the power of node compositing can be hard, but it’s also very rewarding. On Yellow Day there’s a shot that I built up, a light effect going across a character. The first day I worked on that I was frustrated because it took me half a day. I knew I could do it in an hour in After Effects, but I had to replicate that set-up for two other shots. Because of the way Fusion deals with nodes and not with layers, I was able to do the two other shots in ten minutes each. I would have had to do some major reworking in After Effects because of the resolution differences and things like that.

I think the learning curve is not too steep on it, you just start with the basic stuff. It’s a different mindset, a different way of approaching the compositing stage, it’s different from layer based.

Culwell: It’s easier to collaborate with other artists, to create and share things.

Filmmaker: What are the biggest mistakes that you see filmmakers make when working with you?

Culwell: I would say the biggest one is budgeting for the VFX. What we do is so technical and artistic. A lot of directors and producers, they just don’t know what we do and how we do it. It sometimes seems like they don’t care to know, or they don’t take the time to understand that it’s very involved.

Gibbs: I think the perception, because of what we see in Hollywood, is that anything is possible, and it’s true, the things that we can create and accomplish are crazy, but they all come with a budget.

Sometimes we get the delivered footage and if we had only been on set with just one little change to the way they shot it, it would have saved days of work, which would have saved them a lot of money. Because the process is so new to some filmmakers they don’t understand why that small change would have made that much of a difference.

We have a VFX supervisor and sometimes he goes on a shoot, and he’s only really useful for five minutes, but those five minutes will save the client a lot of money and save us a lot of time.

Culwell: I really do think it’s just a fundamental lack of understanding of what we do, and you can’t expect them to because it would take years and years for them to do what we do in order to be able to get the skills and know the software and understand the techniques.

I just think that directors and VFX artists can come together as a team instead of fighting each other.