“If You Start on 10 on Your Dissonant Scale, How Do You Go Beyond That?” Composer Mark Korven on The Witch 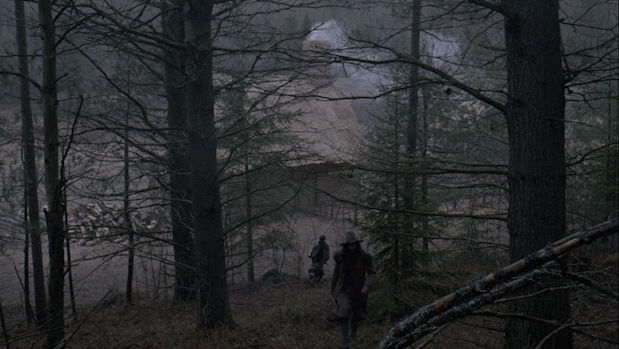 A New England folktale envisioned by production designer turned director Robert Eggers has become a critical and box office darling. As striking as The Witch‘s imagery of a 17th century Puritan family exiled to live beside an ominous forest is, it is made even more haunting when combined with the score conceived by Toronto-based composer Mark Korven (Cube).

Filmmaker: You must be pleased with the critical and box office reaction to The Witch.

Korven: Both have been amazing. I certainly didn’t expect for the movie to go this far. When I started working on it I thought that a lot of people weren’t going get this, especially, with a script written in Jacobean English. But it wasn’t the case. The Witch has exceeded my expectations for sure.

Filmmaker: How different was it working on Cube as compared to The Witch?

Korven: I started from scratch on the music with Cube but because Robert Eggers is such a hands-on director — right from the buttons on the costumes to the cinematography — by the time it was presented to me he already had a clear idea of what he wanted musically.

Filmmaker: How did you get involved with The Witch?

Korven: Robert needed to shoot in Canada because he wanted woods that would look as close as possible to New England of the time. It [became] a co-production with a Canadian producer, and he was also looking around for a Canadian composer. There were 12 to 13 other composers and I was one of those pitching on the job. I was looking for a way to stand out, so I played this instrument called the Swedish nyckelharpa, which is a medieval bow instrument. Some people call it a cross between your grandfather’s rusty old fiddle and a typewriter. There are keys on the left hand to stop the notes and a bow on the right hand. It has this rusty archaic sound.

Filmmaker: It sounds like something out of a steampunk novel!

Korven: Yeah, exactly! The Swedish nyckelharpa dates back to about 1350, so the technology is quite old. But there was something about the instrument that sounded appropriate to me. When Robert heard it he thought, “This is the sound of the score.”

Filmmaker: Was there a temp track?

Korven: There was a detailed temp track that Robert and Louise Ford, the editor, worked a long time on. My job was to look for ways to expand beyond that.

Filmmaker: Is having a temp track an annoyance or helpful for a composer?

Korven: It’s a double-edged sword. Sometimes a temp track is a total curse — scores have been ruined because of it — and sometimes it’s helpful. In this case, the temp track was helpful. The problem with any of them is that you never get a chance to hear the sound without any score and let your imagination run wild as far as what it might possibly be. It was a mixture of good and bad. It’s especially troublesome when the director and editor have been listening to the temp track for a long time. The longer they’ve been listening to the temp track, the more difficult it is to exert any change over the score.

Filmmaker: What did you use as the starting point when composing the score?

Korven: I don’t write anything unless I have a picture in front of me. I wait to be moved by what I see. You can’t do a proper score unless you fully understand what’s going on with the plot and characters. A large part of what I do is to get into the drama of the film and unlock all of that. That’s my first step. Secondly, hopefully there will be some time to let my imagination go and come up with some original ideas that I can hopefully replace some of that temp music with.

Filmmaker: Did you end up having a spotting session?

Korven: It has become so easy to cut in a temp track in a movie that everything you get presented with has a temp track already. Therefore, in a way a lot of the spotting has already been done, so you never get a chance to say, “What if the music came in 10 seconds later? What if we put no music here? What if we put music here?” You’re much more restricted. That goes for 95% of the films which I work on, including The Witch.

Filmmaker: Did you begin composing your score with a particular scene?

Korven: Often I might start with some of the more important cues, like where the witch is first revealed or some of the climatic stuff. From there I tend to go in more sequential order. Once I know what the general themes are then, I’ll go right back to the beginning and work out how much music I have to write per day in order to complete the score.

Filmmaker: Was your creative process in composing the score for The Witch different from previous projects?

Korven: Robert came from New York to Toronto, where I live, and we worked on the score together for the next seven to eight days straight, doing eight-hour days. That never happens. Usually, it’s the case that the director will show up; you’ll maybe have a three- to four- hour session of playback and get notes. A few days later the director comes back, you’ll play it for him again, you’ll take even more notes, and then you complete the score that way. But Robert was intent on going through the score in great detail. I had to check my ego at the door, sit back, and help him realize his vision, because I had a sense that it was going to be strong and compelling.

Filmmaker: What sorts of instruments did you use this time around?

Korven: There were a set of rules that came along with the score. One of them was no electronics. It all had to be acoustic real instruments, so Robert didn’t want any kind of sound design thing. He wanted it all to come from the earth. It was mostly written on the tenor nyckelharpa and the bass nyckelharpa, which is twice the size and more in the range of a cello. I played a large waterphone [which is an experimental instrument], the hurdy-gurdy [was performed by Ben Grossman], and there was an ancient Finnish instrument called the jouhikko. Plus there was some singing.

Filmmaker: I understand that choral singing was reserved for the forest scenes.

Korven: The forest represents where the witch comes from. We pulled out any choral singing whenever there was a forest/witch event, so as to provide the witch with her own voice.  Initially, Robert didn’t want any music in the film. We wound up settling on these string instruments and I convinced him to add some choral singing.

Filmmaker: Was having the choral singing key in conveying the forest as a character?

Korven: We had the wonderful Element Choir. They specialize in improvisation, which was perfect for this score because we wanted it to be something that could be shaped during the recording session. Partly through the recording session Robert kept giving me notes of what he wanted and I said, “Listen. You know what you want. Just start waving your arms about and do a bit of conducting. They will follow you.” He did and it worked.

Filmmaker: Was the recording technique all that different compared to previous scores?

Korven: Nothing especially. Mostly I set up a couple of microphones and went from there. What was different is that it was an improvised score, which I don’t usually do. Because I knew that Robert was going to want to tweak and change things on a constant basis, I kept things loose and open.

Filmmaker: How did you go about making the score an organic part of the movie?

Korven: This was an unusual score for me. One of the things that was unusual was Robert wanted it to be extremely dissonant all the way through. The big challenge for me was, if you start on 10 on your dissonant scale, how do you go beyond that? I worked around that by varying the instrumentation and density of the score.

Filmmaker: Do you look at the context of the scene to establish the proper tone of the score?

Korven: Robert didn’t want anything emotional in the score. He always wanted to keep it dark and tense. If anything leaned at all towards any kind of traditional harmony or melody he steered away from that. The only time I got him to push beyond that is when William, the father, is at his wit’s end at the conclusion of the story. I wanted to create some empathy for him.

Filmmaker: How did the score coexist with the sound design?

Korven: If you were writing a more traditional melodic and harmonic score, once you start adding sound design it can drive composers and sound designers crazy, as everyone is always stepping on each other’s toes. But because of the score being dissonant, you’re playing clusters of notes, which represent sonic noise for a lot of the time. That can be a good thing when you’re working with sound design, because it can meld together nicely.

Filmmaker: Is there a particular shot or scene you are looking forward to audience members seeing on the big screen?

Korven: There’s a great shot when the family is nursing the young boy and it’s all shot with a couple of candles. It’s so beautifully composed and looks like a Rembrandt painting. The composition of these shots is so moving to me. Even the horror fans who might not get The Witch can just watch the beauty of the filmmaking.

Korven: Looks like I will be working with Robert in the future, because he has lots of things on the go. Robert is working on a remake of Nosferatu. I’m hoping to get a chance to work on that. Anything that Robert does is a genre that I would like to be working on. He’s such a cool filmmaker and is likely to be an influential filmmaker. Robert is someone I find inspiring to be around, so I’d love to hang onto his coattails to see what I can learn from him.