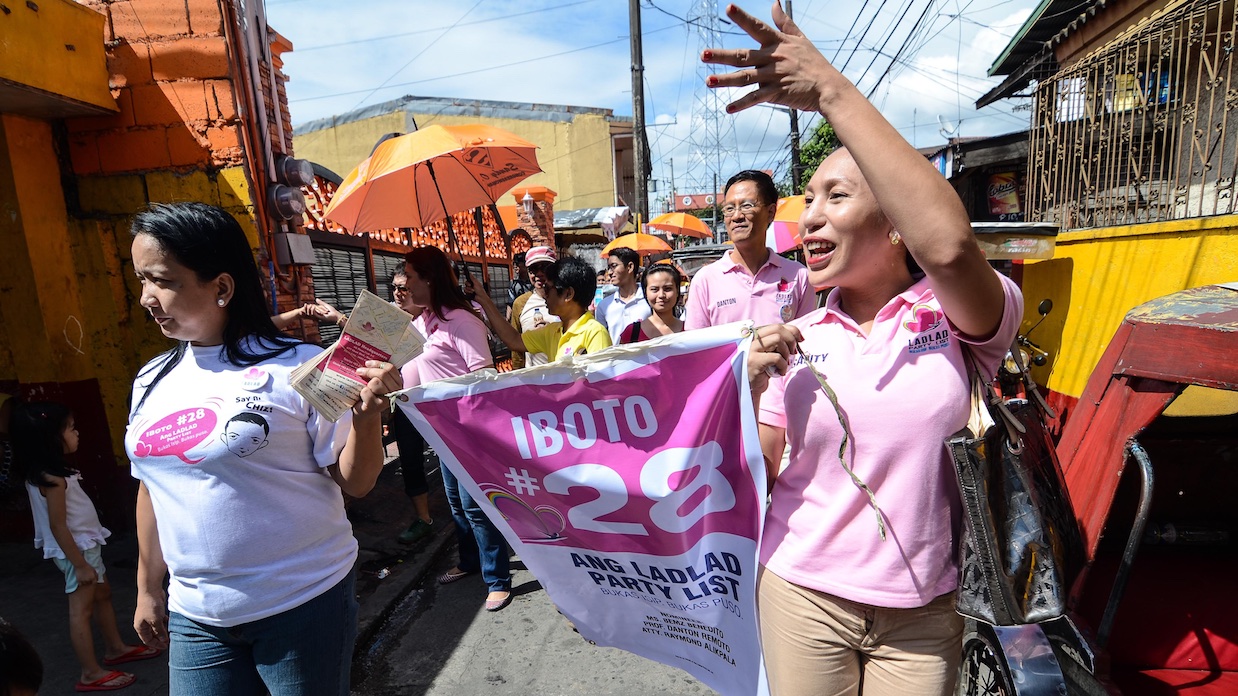 by Lauren Wissot
in Directors, Festivals & Events, Interviews
on Apr 19, 2016

Ironically launching at the stellar Full Frame Documentary Film Festival in Durham, North Carolina right as the anti-LGBTQ HB2 legislation hit the fan, S. Leo Chiang and Johnny Symons’s Out Run follows the Ladlad Party in the Philippines — the only LGBT political party in the world — in the run-up to what could be a history-making election. An artistic political doc, Out Run is both riveting and familiar, as the leaders (including Bemz Benedito, a trans woman who serves as the face of the party) deftly employ campaign strategies that include everything from transforming beauty parlors into headquarters to forming alliances on the local level — even if it means supporting other candidates in quid pro quo moves. The story becomes even more surreal as the Ladlad party goes up against a rival gay organization put together by none other than anti-LGBT preacher and politician Benny Abante, who anointed his group of supporters with the acronym AIDS. In other words, politics as usual. And not.

Filmmaker spoke with the co-directors shortly after their Full Frame premiere.

Filmmaker: So how did this project come about? Had you known about the Ladlad Party for some time?

Chiang and Symons: We actually didn’t begin Out Run in the Philippines but in other parts of the world. We were very interested in the LGBT rights movement taking place outside of North America and Europe, and we became particularly intrigued by out LGBT politicians who were taking the bold step of publicly running for office in traditional and conservative countries where they faced significant social, cultural or religious opposition. Initially, we followed a member of parliament in Nepal, who was the first openly LGBT person elected to national office in Asia. Soon after, we began filming a gay man running for Senate in Kenya. Both of these stories eventually fizzled, but by then we had heard about Ladlad and turned our attention to the Philippines. The story there was particularly interesting because the lead candidate was transgender, there was a dynamic campaign team, and because the entire political party was predicated on LGBT issues.

Filmmaker: It seems to me that one of the main differences between the Philippines’ fight for LGBTQ rights and our own is who are in the positions of power. A transgender woman is the face of Ladlad in the Philippines, whereas here in the States white men (of means, especially during the darkest days of the AIDS epidemic) largely pushed the gay rights movement forward into the mainstream. Because of this, our agendas have been different. Ladlad prioritizes a Gender Recognition Law, whereas we’ve passed same-sex marriage. Were you conscious of any of this during production?

Chiang and Symons: The emergence of a transgender woman as the lead candidate of Ladlad was actually quite controversial. Many members of the LGBT community there felt that a “straight-acting,” professional, cisgender gay man would have made a stronger primary nominee, and were not as supportive of Ladlad in the election as they might have otherwise been. Although gender nonconforming people are definitely more prevalent and visible in the Philippines than in the US, Bemz’ candidacy was largely viewed by the Filipino LGBT community organizers as innovative and somewhat risky rather than indicative of a cultural preference for trans leaders.

Ladlad’s main goal is passage of the anti-discrimination bill to help guarantee equal rights for LGBTs in employment and housing. Although they do hope to pass a gender recognition law, this is an effort to emulate legislation that already exists in parts of Europe and the U.S. As the film reveals, Ladlad’s decision to not advocate for same-sex marriage in their platform is controversial and is more a function of the party leaders’ fear that it will alienate voters than it is a reflection of the extent to which they hope same-sex marriage will become legal.

Filmmaker: One of the scenes that most stuck with me was your interview with the gay supporters of anti-LGBTQ preacher Benny Abante. I assumed they were paid to rally behind him, but the look of terror on most of those faces — mouthing pro-Benny lines as if from a hostage video — made me wonder if perhaps they were being threatened. Did you ever fear you might have been putting the lives of any of your subjects in danger simply by your camera being there?

Chiang and Symons: Our experience in filming the AIDS group was fairly straightforward. We made contact with the group’s leader, and he and the other members spoke freely and were eager to share their views. Benny Abante was not present during most of the conversation and wasn’t aware of what they said on camera. Their facial expressions are likely more a function of a lifetime of internalized homophobia and institutionalized poverty and discrimination, which may have influenced their decision to work for Benny rather than for more progressive candidates. Cellphone cameras in the Philippines are ubiquitous; we didn’t have the impression that the AIDS group, or any of our other subjects, would suffer as a result of the presence of our camera.

Filmmaker: It’s fitting that you had your world premiere at the Full Frame fest in North Carolina, which recently enacted sweeping anti-LGBTQ legislation. As progressive as we think we are in the States, though, we’ve had not one female president (while over 20 countries from Germany to Liberia are currently run by women), nor have we ever had a transgender person hold higher office. (Contrast that with New Zealand’s Georgina Beyer – a former sex worker! – who started serving as a Member of Parliament over a decade and a half ago.) So I’m wondering if shooting your film in the Philippines gave you any insight into America? Did HB2 even strike you as that much of a surprise?

Chiang and Symons: The HB2, or HB1523 in Mississippi, or the new law just passed in Tennessee, did not really surprise us. It’s been a few amazing years in terms of LGBTQ rights in the US – doing away with Don’t Ask Don’t Tell (Johnny’s film Ask Not examines that law), passing federal marriage equality law, and just the general positive shift of society’s attitude towards LGBT individuals (at least the L and G). We can’t be surprised by the anti-LGBTQ laws from these relatively more conservative states as a reaction to this positive shift. We struggled with coming to North Carolina to show Out Run because of the call for boycott, but ultimately we decided to come. We felt good about sharing a nuanced portrait about LGBTQ people from a different part of the world to those North Carolinians who were interested in learning more. We also want to support Full Frame, which programmed three films about transgender people in this year’s festival.

Each of us has spent significant amounts of time in different parts of the world, and in different parts of the US. The way we see it, the US is progressive in many ways and conservative in many others, just like in the Philippines. As you pointed out, the US hasn’t even elected its first female president yet, while the Philippines has already elected two women to its highest office. But in the US, many more policies and laws are in place to protect LGBTQ people, both in the government and the private sector (as evidenced by the reaction of companies like PayPal, American Airlines, NBA, etc. condemning HB2). While in the Philippines, people like Bemz and Santy still need to hold IDs and passports that indicate their gender as “male.” I guess the takeaway for us is that the US and the Philippines are more similar in the level of progressiveness than some may think. No one will bat an eye at a transgender man walking down the street holding hands with his male or female partner in Manila or New York, but transgender women are just as likely to be assaulted for using women’s restrooms in a provincial Filipino town as they are in some less diverse parts of the U.S. There is still work to do in both countries.

Filmmaker: I briefly met Leo after the #DocsSoWhite? Speakeasy Conversation at Full Frame, where he was seated next to Roger Ross Williams. It struck me that Out Run and Roger’s 2013 film God Loves Uganda were both crafted by directors of color, yet in a way aren’t you as Americans guilty of doing what white directors who tell Asian-American or African-American stories (O.K., Ken Burns) are doing? You guys are San Franciscans, not Filipinos, while Roger, a New Yorker, is not Ugandan. It seems Americans shoot in developing countries all the time. Is this not a form of colonialist filmmaking? Shouldn’t filmmakers living in these places be telling their own stories?

Chiang: The international documentary community should support indigenous filmmakers around the world to tell their own stories, both with funding and, importantly, with recognition – by programming, broadcasting, and publicizing these films. IDFA (IDFA Bertha Fund) and HotDocs (Blue Ice) are good examples of western organizations that invest in documentarians from the developing world. Sundance has been granting and running a yearly workshop in Beijing for local Chinese filmmakers. I applaud these initiatives and would love to see more of them.

For Johnny and I with Out Run, we worked with a number of local Filipino filmmakers as our field producers and crew members because we want to do our part to share the resources we get from the west with Filipino documentary communities. I imagine that Roger did the same thing in Uganda. As gay filmmakers, Johnny and I feel the obligation to tell stories of our queer brothers and sisters all over the world. And as a transnational person/dual citizen who was born and raised in Taiwan, I feel comfortable being the conduit of a story from my part of the world.

The question of “who gets to tell the story” is complex. What we touched upon at the #DocsSoWhite? panel is relatively superficial, and certainly referred to more generalizations than to actual complicated situations. We didn’t touch on class issues — that many doc makers do often come from some amount of financial security that they are able to pursue this type of work. And the class issues are certainly alive and well within the communities of color.

I guess I can speak for myself from the #DocsSoWhite? discussion that I don’t believe you have to be from a specific community to tell a story from that community. How boring would it be if Asians can only tell Asian stories, women can only tell women’s stories, and New Yorkers can only tell New York stories, etc.? So few, if any, Asian-American projects get adequate funding and recognition in the documentary world every year, and I get frustrated when the institutions that support these one or two projects every few years don’t work harder to engage with Asian-American filmmakers in key roles. This perpetuates the status quo and also is a bit lazy.

In an ideal world there should be many films from the developing world that get supported, told by both locals and outsiders with rich, diverse perspectives. And there should be many films about the communities of color in the US, told by both filmmakers of color and white filmmakers with rich, diverse perspectives. I want all of us to work towards that.