Tribeca 2016: Eline Jongsma and Kel O’Neill on their VR Piece The Ark 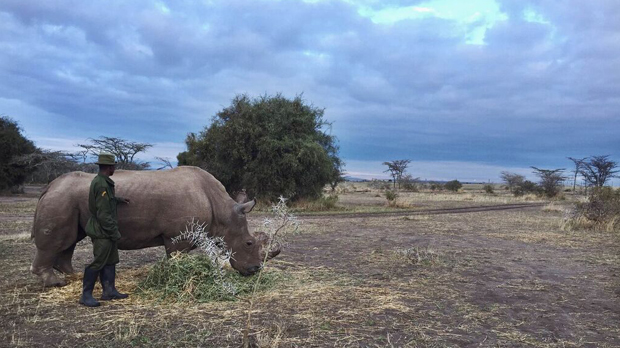 by Randy Astle
in Directors, Filmmaking, Interviews, Transmedia
on Apr 19, 2016

One of the most moving exhibits in New York last year was a lone Galapagos tortoise in a corner of the American Museum of Natural History. Lonesome George was the last Pinta Island tortoise in the world, and after he died in 2012 the only way to encounter this entire species was to view his mounted form through glass in a museum. With a mass extinction at least as great as the one that killed the dinosaurs happening all around us, many other species will soon be visible only in the same way.

But now Kel O’Neill and Eline Jongsma, a husband-and-wife team of interactive filmmakers, have found a new way for us to encounter another species on the brink, the northern white rhinoceroses. With only three individuals left, northern white rhinos are one of the most critically endangered species on the planet and their imminent extinction seems inevitable. For The Ark, a virtual reality piece that premiered at Tribeca’s Storyscapes event earlier this week, Jongsma and O’Neill filmed animals in Africa and at the San Diego Zoo, where a fourth white rhino passed away while the film was in production last fall.

Viewing them through the headset and headphones brings the rhinos tantalizingly close, as does the smell of straw in The Ark‘s display area. And the use of virtual reality proves incredibly fitting to document a species that will soon not exist in our own physical reality at all. Moreover, in its factual content The Ark is a testament to the sweeping breadth of the current mass extinction event and gives a glimpse of hope for one way we humans are using technology to try to stop it — a particularly important question given, as one scientist in the piece says, we are the ones causing the problem.

Filmmaker: The use of virtual reality seems, perhaps in hindsight, a wonderful and completely appropriate way to depict a critically endangered species, but where did the idea come from initially?

Jongsma: About two years ago, we began researching the “Frozen Zoo,” which is a laboratory in the San Diego Zoo that stores the genetic material of endangered and extinct animal species. We immediately wanted to know what that physical space would look like and feel like. We dove into the research headfirst, and that’s how we found out about the stem cell research that the zoo is doing in association with the Scripps Institute. It’s basically a Jurassic Park-style attempt to genetically rescue the northern white rhino.

During this research period, we were being considered for the inaugural Tim Hetherington Visionary Award, and we decide to pitch the idea to the jury. We won the award and there was no turning back. It had to be made, and quickly, before the last rhino disappeared.

Filmmaker: What were fundraising and production like? Where there any logistical or technical challenges that you had to overcome? The fact that Nola passed away right as you were there recording her is astounding and shows the urgency of your topic.

O’Neill: We’ve never felt this kind of urgency on a production before. Animals were literally dying as we were filming, so it was important for us to fundraise and produce quickly. After we won the Hetherington last year, we thought we could leverage the win into a deal with a more traditional, cash-rich production company who could greenlight the project quickly. At first, it seemed like this was the right strategy — The Ark got optioned by a big company — but then we ended up waiting around for that green light for several months.

We are much better at making than waiting, so we ended up jumping out of the option and sticking with the DIY production methods that have always served us well. We shot in San Diego using a ten-camera GoPro rig, then did a Kickstarter campaign to raise money for Kenya, and that campaign helped us attract the attention of a VR company called Springbok, who filled in the final gaps in our budget.

The craziest thing about all of this is that we ended up coming in six months ahead of our original production schedule. That never happens.

Filmmaker: My initial expectation was that the piece would primarily be contemplative, spending time in the presence of a vanishing animal, but you also focus on cryogenic zoos, in vitro fertilization, and stem cell research. How did those play into your project?

Jongsma: To put it in very simple terms, San Diego and Scripps are trying to turn skin cells of already deceased rhinos into stem cells which they then try to turn into sperm and egg cells which you could then fertilize and implant in a different rhino species. This way you could potentially bring them back with some genetic diversity by ensuring the mating of two animals who would have never met in the wild.

O’Neill: This opens up the question at the heart of the project: should we do this? We have the power to destroy species, and we wield that power indiscriminately. Now it’s starting to look like we have the power to bring these species back. Is it our duty to do so?

Filmmaker: This is a bit different from your previous work, though it’s consonant with it in other ways. What are you planning on next?

Jongsma: In The Ark we use split screens to tell our story. If you look to the front you see Kenya. If you look behind you, you see San Diego. In this way, the storytelling is very much in line with what we started with Empire. We are used to creating stories where we have multiple screens playing simultaneously. We like playing with perception of time and place.

O’Neill: The themes and ideas that we’re working with in The Ark are the themes and ideas that we’re currently obsessed with. We’re thinking a lot about the future, and about what life in the post-natural world will look and feel like. It has something to do with becoming parents, I think, and our next project with POV, Exit, addresses these themes even more directly. We’ve also got another animal-focused VR documentary in the works that we’re very excited about.