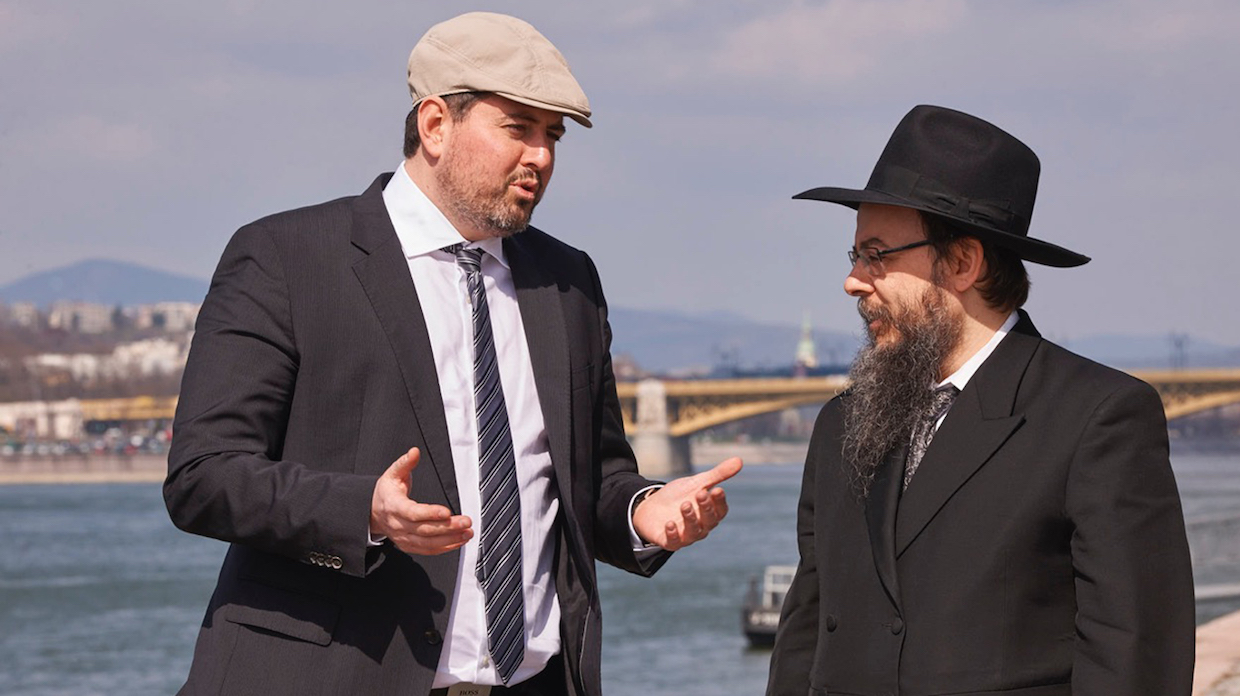 by Erik Luers
in Directors, Festivals & Events, Interviews
on Apr 25, 2016

A role reversal so outrageous it could only be a work of nonfiction, the story of Csanad Szegedi, an infamous member of Hungary’s conservative Jobbik party, is as preposterously true as they come. A former Holocaust denier and anti-Semite, Szegedi now lives as a practicing Orthodox Jew determined to honor his familial past (his grandparents were Jewish). Fascinated by this turnaround, filmmakers Joseph Martin and Sam Blair created Keep Quiet, an in-depth study of the new life of Szegedi and co-lead Rabbi Boruch Oberlande, as a portrait of internal religious tension and the endless trying struggle to right one’s wrongs.

As Keep Quiet premiered at the Tribeca Film Festival last week, Sam Blair and Joseph Martin spoke to Filmmaker about Csanad Szegedi’s political background, how his media familiarity made him comfortable in front of a camera, and how the filmmakers evoked audience empathy for a character once filled with hatred.

Filmmaker: As Csanad Szegedi’s new outlook on life is far removed from his original anti-Semitic M.O., were you determined to evoke a sense of doubt or untrustworthiness in the viewer?

Blair: We didn’t need to put much work into evoking doubt, as doubt follows Csanad wherever he goes. I think audiences will naturally flip-flop their feelings for him. In some ways, I feel the issue of his sincerity is a red herring as there are broader questions to be asked by the film. I was more interested in revealing and understanding the forces that have shaped Csanad’s confusion about who he is than in delivering a conclusive answer to how genuine his actions are, and so the film retains an ambivalence about him. It’s important to understand that despite the outrageousness of his story, Csanad is not an anomaly. There are many people of his generation in Hungary who are similarly suffering an identity crisis and the growth of right-wing nationalism could be seen as a result of this need to strengthen and assert a sense of self that has been eroded. This is not just one man’s story.

Filmmaker: Did you find Rabbi Boruch Oberlander to serve as the viewer’s avatar of sorts, as their way into the story?

Blair: When all is lost and the way forward is unclear, Rabbi Oberlander serves as both catalyst and guide for Csanad and us as viewers — offering a way ahead, propelling the story forward. If the question of Csanad’s sincerity is hanging in the air, then it is Rabbi Oberlander who deals with the potential fallout from that the most. His decision to take Csanad under his wing was controversial and a risk to himself personally, but his moral certitude gives the viewer a reference point, a mark on the compass, from which to make their own judgments.

Martin: Absolutely. Csanad is ultimately an unsympathetic character in that he was a leader of a far-right party and had even set up paramilitary organizations that were thought by many to commit racially aggravated violence. It’s easy to make an audience hate someone like that but the dilemma we had was how to make them care enough about his story once the revelation of his Jewish heritage is made.

Rabbi Oberlander is a perfect character to help us with this. He is funny, wise and likable. But more importantly he feels it’s his religious duty to help Csanad make amends. Helping Csanad, he has to put his own reputation on the line. If Csanad were to return to his old ways, Rabbi Oberlander would lose all the respect and stature he has built up over the years in the community. I think the audience roots for Csanad because of how much they care about Rabbi Oberlander. It is Rabbi Oberlander they identify with.

Filmmaker: How did you first hear about Csanad and what made you feel that his story would be ripe for a cinematic retelling?

Martin: I first heard about Csanad’s story when myself and the producers Danielle Clark and Alex Holder were on a research trip in Hungary. We had heard about this far right politician that had discovered he was actually Jewish. What no one knew was that he was now planning to live as a religious Jew. It seemed like an incredible story when we spoke to him. It was obviously a cinematic story about the downfall of a man, but finding out that he was hoping to right his wrongs provided a perfect third act and made the story irresistible.

Filmmaker: How did you make Csanad feel comfortable on camera? Due to his drastic change in perspective, he had to have realize that viewers would study him throughout every shot, looking into his true character beneath the surface.

Blair: Csanad’s personality and background in politics means he is very comfortable on camera, which is both a positive and a negative. He is also used to being scrutinized and seems to live by the dictum that there’s only one thing worst than being talked about: not being talked about. By the time the film was being made he had already been through a public humiliation, so he was ready to “go there,” but as he is a very capable self-mythologizer, the challenge was for the film to not simply be on his terms. There is a facade there that needs to be, if not cracked, then revealed.

Martin: The thing to understand with Csanad is that he was a professional and high ranking politician in Europe for many years. He knows exactly how to play the media. My core message to him again and again was that it was in his best interests to be honest as an audience will see through any PR fakery and dislike him for it. The film almost becomes about this issue. Do you believe Csanad? Do you believe he has changed? I think there are some moments where he is trying to put on a front, but that in itself is revealing of the character that lies beneath. It is a choice he has made. However, I do think at moments we get through to the “real” Csanad. This is probably down to persistence more than anything else. When someone sees you coming back to film again and again, they know you want more than a simplistic news piece. That show of dedication will win you a lot of trust and ultimately gain you better access.

Filmmaker: What was it like working as a directing team? How do you assign different responsibilities to each other?

Martin & Blair: We didn’t work as a team in the usual sense. Joe filmed a majority of the interviews with the contributors, whereas Sam came on board a bit later in the project to offer a fresh perspective. Sam filmed additional interviews and constructed the film with the brilliant editor Ben Stark.