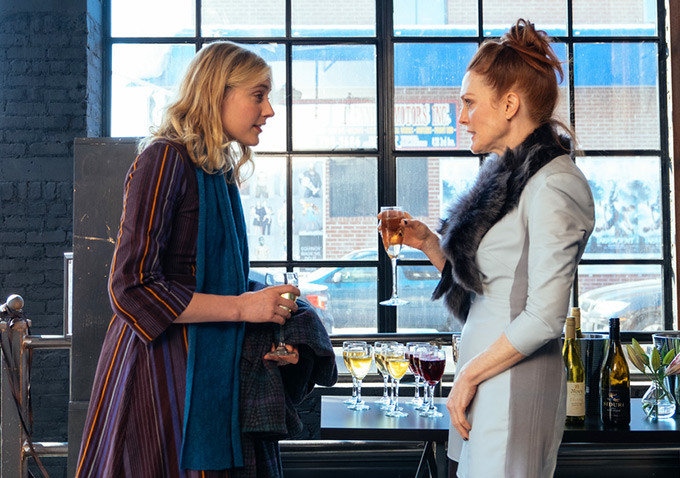 by Howard Feinstein
in Columns, Filmmaking
on May 16, 2016

Until filmmaker, novelist, and funnywoman Rebecca Miller weighed in with the invigorating Maggie’s Plan, the history of films addressing the impasse between order and randomness — in theological terms, the conflict between free will and determinism — has rested on the mature products of profound Western European minds. Bresson’s Au Hasard, Balthasar and Dreyer’s Gertrud, for example, are stark, minimalist, and melancholic, with a divine presence at the very least implied. 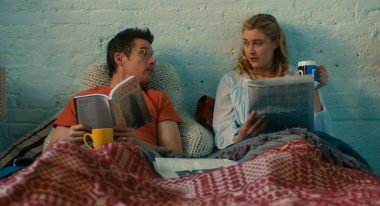 In Miller’s movie, intellectual musings are negligible in the fate debate. Destiny, whether embraced or resisted, is built into something more palpable: the actions of her quirky characters. Her earlier films (Personal Velocity, The Private Lives of Pippa Lee) were of a more earnest bent. Here she shifts from the philosophical and abstract to the secular and precise, the latter pairing so rooted in earthly concerns that the quotidian takes center stage. She masterfully inverts convention, eliding points of high drama — marriage, childbirth, divorce, professional reward — in favor of ordinary moments, which cumulatively amount to revelation.

Chief protagonist Maggie (the continually surprising Greta Gerwig, her range much broader than what she has shown previously) is but a mortal assuming the mantle of a Supreme Being. She maps out schemes for others to enact, in order to keep chaos in check and to grease the wheels for her own circuitous journey: bowing out of a marriage as merely value added, for example, by arranging a second chance, a rematch, for a couple close to home whose matrimony ended in divorce.

According to The Guardian‘s Catherine Shoard, she leads “a life of logistics.” No one could accuse her of possessing a lot of soul — but the calypso beat of many of the songs on the soundtrack provides a dose sufficient to maintain a fairly constant rhythm, which keeps  the narrative energized and thrusting forward. Her problem is the free will of those she manipulates, which challenges the plots she hatches. Her effects may be powerful, but the outcome of her strategic interference may be a long way from the resolution she envisions. 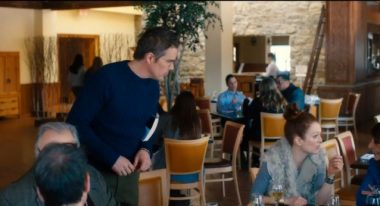 Maggie up against obstacles produces a friction that Miller plays for laughs, quick ones, in order to overcome reflexive dismissal by the spectator. Freud described how jokes work best when they connect instantaneously with the unconscious. Any lingering in the limbo of consciousness enables deconstruction, a death sentence for comedy. The filmmaker is fortunate to have as bearers of humor cinema’s top funnypersons, each blessed with expert timing.

The tension driving the film springs from the same sources as its drollness: Maggie’s external hindrances and interior struggles. She is not afraid to challenge fate in order to achieve goals she has set for herself, such as entering motherhood on her own terms, without compromise, here via a paper cup filled by a male donor who is requested to renounce parental rights. A plot knot surfaces when she simultaneously falls in love with another man, which means revising her mores, albeit halfheartedly, to accommodate someone else’s. (Connecting the two men are scenes that involve an embarrassing nightgown stain. Miller is hilariously vulgar.)

Maggie attempts to control others without violating the major tenets — such as tolerance and respect for individuality — of her Quaker faith, a religion more humanistic than dogmatic. For those subscribing to the Society of Friends, each person contains God within. Ironically, this klutzy kook manages to complicate a religion with simplicity and silence at its core. Her struggles make seem downright straightforward in comparison the ambivalence about violence in the heads of threatened 19th-century peace-loving Indiana Quakers, played by Gregory Peck and Anthony Perkins in William Wyler’s Friendly Persuasion (1956). She is so fascinatingly unpredictable that it is no surprise she is the only character for whom Miller wrote a back story. The decision was very personal. She told The New York Times, “I injected a lot of myself into Maggie. A kind of goofiness that goes with a certain kind of intelligence…is definitely one of my traits.” The film’s snappy dialogue is just one measure of that potent brew. 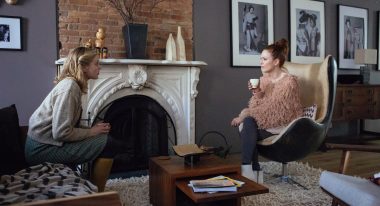 Maggie is an arts counselor — a job of the people, in Quaker terminology. In her own words, it is “the bridge between art and commerce” — a duality often used to describe cinema itself. Accustomed to objectifying herself, she complains incessantly about her lack of a boyfriend to her pal from college days and ex-lover Tony (Bill Hader) and wife Felicia (Maya Rudolph). In this milieu of self-involved, artsy-fartsy neurotics, they are slightly flexible anchors to reality, rubbery links to some degree of productive adjustment. At the same time, she considers her life in lower Manhattan a losing proposition, with or without a significant other.

She selects nebbishy Guy (an Amish-bearded Travis Fimmel) — whom she exaggeratedly describes as a pickle entrepreneur — to donate the sperm necessary for impregnation by her preferred method: syringe in the bathtub. The voluntary choice coincides with a random encounter at the faculty payroll desk with novelist/anthropological theorist John Harding (Ethan Hawke), married with children. Eagerly proofing — make that devouring — pages from his new book, she becomes enamored more of the idea of a great writer than of the man himself. He falls in love with her as much for her utility and ego-enhancement as for the woman herself. They marry, have a sweet daughter.

An oversight brings Maggie together with his ex-wife, Georgette (Julianne Moore, knee-slappingly funny), a pretentious Danish academic also bogged down in theory, her frostiness echoed by a severely distancing bun, overly clean, tight, and weird-within-proscribed-limits Scandinavian couture, and the nauseatingly forbidding amount of space in her home between chairs meant to facilitate intimate conversation. The two become friends — each needs the other to fulfill self-serving needs — and Maggie eventually meets the couple’s three snooty, privileged children. Meanwhile, the general frisson between John and Maggie has started to dissipate. The time has come for will to take over what chance had begun. 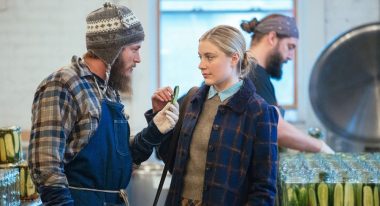 A plot summary does little justice to the film’s brilliant layering, innuendo, detailed digressions, and imaginately drawn characters, each with memorable tics or other markings to flesh them out while retaining their singularity. The structure is elliptical. Within the narrative, the wisely chosen temporal leaps divide the story into distinct acts. Miller further segments the film with banal but colorful breaks, like the numerous scenes of eating, shots of downtown New York sites (Washington Square, for example, and Union Square Market, where Maggie and Tony push strollers side-by-side while vendor Guy does lucrative business with his home-made Bavarian pickles), and inserts of spontaneous, frequently comic lovemaking. Hard-to-believe coincidence works credibly inside the free will-versus-determinism framework. The film oozes irony, which is much more than a fragmentation device. The labels lover and wife seem to alternate.

Without giving too much away, let’s finish with the following observation: A plan has a beginning, a middle, and an end, with a big but attached. The termination of one overlaps the start of another. There are no finales that would point to cut-and-dry separation. Life is cyclical, not linear. You don’t think Maggie is a one-off master of maneuver, do you?