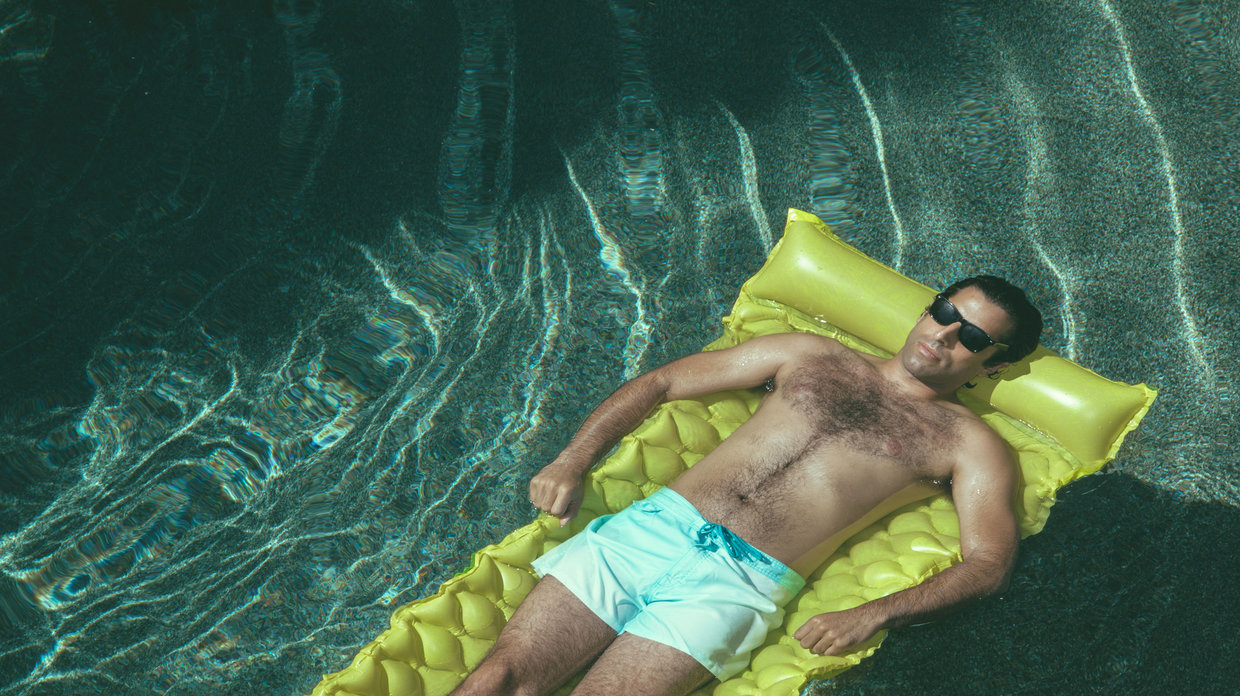 Two years ago, Filmmaker featured Heidi Saman on our annual list of “25 New Faces of Independent Film.” The filmmaker and associate producer at NPR Radio’s Fresh Air had just concluded a successful Kickstarter campaign for her debut feature Namour and was beginning to prep for production.

What a difference two years makes. Namour will have its world premiere in the LA Muse section of this year’s Los Angeles Film Festival, where it debuts on June 5.

The story of Steven, a young Arab-American valet at a slick L.A. restaurant, caught between his dead-end job and the demands of his immigrant family, Namour references such disparate films as The Graduate and Taxi Driver, while creating a stylistic homage to the City of Angels.

Below Saman answers questions about the challenges of financing a film featuring Arab-Americans, her experience crowdfunding, and how Taxi Driver and other films inspired Namour.

Filmmaker: I know that Namour was a finalist at the Sundance Screenwriters Workshop and your short film The Maid premiered at competition at Cannes. And yet, you still had a hard time finding investors in the feature. Why do you think that was?

Heidi Saman: I had a hard time finding investors because of the protagonists in my film are Arab and Arab-American and several investors didn’t think there was an audience for an independent film that features Arab-Americans. Other producers told me that they couldn’t back a film that had Arab-Americans as the leads because they weren’t “likeable” enough for audiences.

One producer told me that I should turn the script into something more palatable for audiences – like a family drama or romantic comedy with a wedding. The one that hurt the most was when a potential investor mentioned that I should include a theme about terrorism, because that would be an appealing and recognizable topic for an Arab-American lead character.

These investors wanted me to reiterate and reinforce Arab stereotypes and story lines that were safe, “market-approved,” and not at all connected to the story I wanted to tell. I love films that possess the mark of a filmmaker’s voice and visual style and Namour reflects a story and mood that is very personal to me, my life, and where I’m from.

Filmmaker: You eventually turned to crowdfunding to raise money for Namour. Was that process at all what you expected? How did your Tumblr following help that process?

Saman: Crowdfunding was like running for office. It was one of the hardest things I’ve ever done as well as one of the most beneficial things I did for Namour. I ended up finding more investors through the success of my Kickstarter campaign and I found a community of people that already wanted to see Namour before I had even made the film. I was overwhelmed with the kindness and support that I received from the campaign. I had this idea that crowdsourcing was akin to begging, and I didn’t want to do that. But the process of creating the campaign forced me to articulate the type of film I wanted to make, and helped me package the film, which is strange to do before the film is even made, but is so important to do as an independent filmmaker.

My tumblr following was so beneficial in spreading the word about the campaign. I started my tumblr in 2012 when I knew I wanted to make Namour. I found a group of passionate cinephiles who were living and breathing film and were also making films of their own. They would reblog my posts about my Kickstarter campaign and supported the campaign as well.  I like to think of my tumblr as recreating my film school environment, where people are obsessing over frames of films and certain directors. I found a lovely support group and I hope to connect with more filmmakers through it.

Filmmaker: In what ways is Namour autobiographical or at least close to your family’s immigrant experience?

Saman: Namour is autobiographical in the sense that it captures the ethos of my family. My parents immigrated from Cairo, Egypt and worked so hard to give my brother and me a middle class upbringing. They’ve owned the same home near Los Angeles for over 30 years and it wasn’t until the 2008 economic recession that they feared they might have to give up the home they had owned for as long as their entire marriage. An ordinary middle class house in the suburbs, I didn’t realize what it signified until the prospect of losing it became a reality. An absurd sense of desperation took hold of me, as if losing that house meant I was losing a part of myself. That home was the result of my parents’ hard work and a work ethic they had passed along to my brother and me — and suddenly, it was going to disappear.

I believe that class is invisible in how it pervades our ethical codes, in how we see ourselves in relation to others, and how it informs our expectations of who we think we are. I knew there were some rich ideas in that desperation that I felt and that was the jumping off point for the character of Steven.

Filmmaker: The first scenes in Namour echo the opening scenes in Taxi Driver. How intentional was that reference? What other films inspired Namour?

Saman: Taxi Driver was a huge influence on Namour. The character of Travis Bickle is deluded about the world and himself and I wanted to use Steven as an unreliable narrator in similar ways to how Travis is used in Taxi Driver. Where Travis takes his delusion to extremes, I wanted Steven to take his delusions to small, at times, petty extremes — because that’s what so many of us do when we feel trapped by life’s circumstances — we get petty about the smallest things. Other films that inspired Namour were Antonioni’s L’avventura for the way it cinematographically captured solitude, the photography of Malick Sidibe, Mad Men, Ousmane Sembene’s Black Girl, and the spirit of Fellini’s La Dolce Vita.

Filmmaker: One of the things I loved about Namour is that it defies categorization and is wholly original. I’m curious to hear how you pitched it to financiers.

Saman: I pitched it to financiers as a film about the decisions we make when our responsibilities begin to weigh down our convictions — and why life can feel like it’s passing us by.