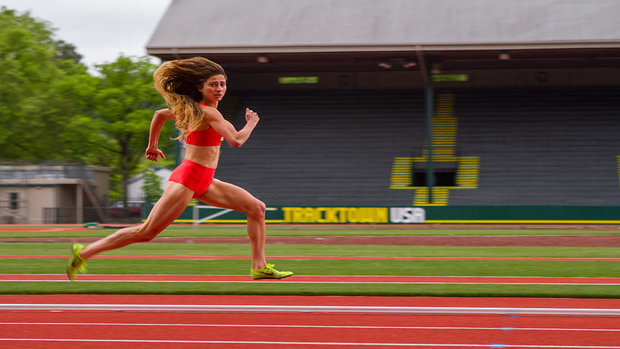 It’s rare, if not unheard of: a first-time feature film director who is also an Olympic athlete. Such is the case with competitive long distance runner Alexi Pappis, who, along with her boyfriend Jeremy Teicher (one of Filmmaker‘s 25 New Faces of 2013), co-wrote and co-directed Tracktown, a new feature film which will have its world premiere at the Los Angeles Film Festival on June 4.

In addition, Pappas, who will compete for Greece at the upcoming Summer Olympics in Brazil,  stars as Plumb Marigold, a young Olympic hopeful trying to find balance in life. Filmed and set in the real-life “Tracktown,” (Eugene, Oregon), the quirky, semi-autobiographical coming-of-age drama also features Rachel Dratch and Andy Buckley as Plumb’s parents.

Filmmaker recently reached out to Pappas and Teicher to discuss their collaboration, blending fiction and reality, and the importance of crafting a film that was true to Pappis’ experience as a young female competitive runner.

Filmmaker: Alexi, in what ways are running and filmmaking alike? How do you balance both roles?

Alexi Pappas: I think both running and filmmaking are disciplines that can be learned and practiced. It’s easy to think that you have to be “gifted” to be a good runner or writer, but I think the hard work is the most important part. For example, I don’t believe in writer’s block. I believe we have tools and warm-ups to rely on — like a favorite desk, or song, or writing pencil  — that are just like the warm-ups I do to prepare for a race. Even if the conditions aren’t ideal or I don’t feel amazing before a race, I know once I do my warm-up routine and put on my uniform and favorite shoes, I’m ready to go.

In terms of balancing my two roles, I find that one world enhances and elevates the other world. I want to be healthy and run fast to support my film work, and having an outlet for my creative and business energy is hugely helpful in remaining a focused and well-rounded athlete.

Filmmaker: Jeremy, what was it like collaborating with Alexi on what was obviously a very personal film for her? And for both of you, how did you manage co-directing responsibilities?

Jeremy Teicher: The most personal element of Tracktown for Alexi is her real-life relationship to the track and field community. All the locations you see in the film, all of the athletes that appear on screen — they are all very real parts of her life. It was important to treat those relationships with respect and gratitude, both from a production standpoint (make sure your crew doesn’t scratch the floor of the underwater treadmill) and a narrative standpoint (tell a story that feels true to the world you are portraying). Blending fiction with reality in a real-life community calls for a unique approach to the filmmaking process where the filmmaker has a responsibility to the community he or she is portraying.

Tracktown began from a very collaborative place — from the moment the project began we were building everything from the ground up together. We collaborated on every stage of the filmmaking process, from writing to fundraising to producing to directing and editing. We have different creative and producorial strengths that complement each other well. With directing specifically, we worked together to develop the vision for the film ahead of production — talking about how scenes might look, what the characters might wear, which locations we liked, and other pre-production types of questions.

On set, Alexi was able to step back and focus on her performance while I became the point of contact for the actors and crew. Each night after filming we would review how the day’s work went and work together to address any questions for the next day’s shoot.

Filmmaker: How did you manage to get Rachel Dratch and Andy Buckley on board? What was your pitch?

Pappas: With both Andy and Rachel, the pitch began by getting the script into their hands through mutual contacts along with a brief description of the project — in short, “Come to Oregon and work on an indie film with real-life Olympic athletes.” (Rachel went to Dartmouth, the same college we went to, and was a member of the same improv troupe as Alexi; we met Andy through Chris Bender, our executive producer.) I think the unique fiction-reality blend, along with the accolades from Jeremy’s previous film and the support from the Sundance Creative Producing Labs (via producer Laura Wagner), presented a very intriguing package that grabbed their attention and also felt “real” to their agents.

Filmmaker: For Alexi, can you talk about some of the challenges of being both director and actor? Are there benefits to being a director who acts?

Pappas: The main challenge of balancing directing and acting is managing your focus and energy. When I was trying to be 100% committed to acting, there was very little energy to focus on the other responsibilities a director needs to manage on set. That’s why it was so great that Jeremy was able to be the captain on set and the point person for the crew and the other actors. Jeremy and I crafted the vision for the film together and then each executed that vision in our own ways during production.

Filmmaker: There is such a dearth of coming-of-age films with female protagonists. Did you set out to fill that void?

Pappas: We started by setting out to tell a story that would speak truthfully to our experience as young people who have dedicated our lives to pursuing a dream, and then sometimes questioning if pursuing that dream really is what will make us happiest. That question forms the emotional core of Tracktown. Building from that, we also wanted to make a film that was true to my life as a female elite athlete.

I hadn’t seen a movie that really captured my experience. Since I am a part of that athletic world right now, training for the 2016 Rio Olympics, we are in a unique position to tell a special story and open a window into a world very few people get to experience. That is what we set out to do — tell a truthful story that nobody else could tell.