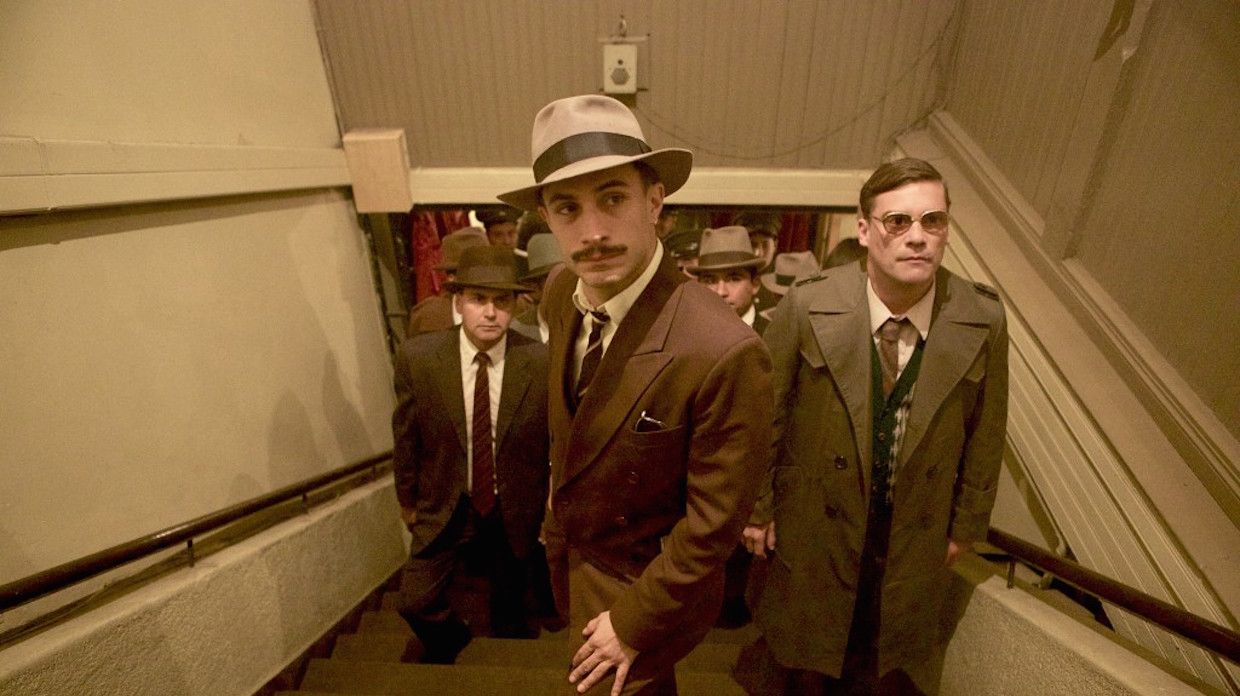 Pablo Larraín really and seriously screws up for the first time with Neruda. Few saw or recall the existence of his debut, 2006’s Fuga, which received a middling response on the festival circuit; I seem to recall interviews around the time of 2008’s amusingly appalling (and vice-versa) reputation-establisher Tony Manero where Larraín said Fuga‘s indifferent reception prompted him to rethink a rather conventional aesthetic and come up with something inescapably different. Each film since his coming-out has, in variously scabrous ways, dealt with Pinochet’s legacy: Manero and Post Mortem taking place at the moment of his coup, the late-’80s-set No a crowdpleasingly cynical comedy re: the political machinations around the dictator’s removal via referendum. Jumping to the present, The Club was an attack on the contemporary Catholic church, and one target remained collaboration with the former regime.

His first of two films this year (this premiered at Berlin, while Jackie will be playing later at TIFF direct from Venice) hops back further in time than Larraín ever has: 1948, when Chilean poet Pablo Neruda (Luis Gnecco), following the outlawing of the Communist Party, fled the country. Though the narrative takes place long before his emergence, Pinochet again hangs over the proceedings. You probably can and should do a little better than Wikipedia for a primer on Neruda, but if you’re unfamiliar with the poet’s life story it’s a helpful primer that’ll get you through most of the finer details the film glosses over in passing. The crux: many suspect that Neruda’s death was a poisoning at the coup’s hand, so even a film about a small portion of his earlier life must lead, unavoidably, back to the specter of Pinochet.

It’s absolutely valid for Larraín to make the argument — as he’s effectively done through his filmography so far — that it’s impossible, for the indefinite future, to be a Chilean filmmaker without returning to this massive political rupture and trauma; Patricio Guzmán has effectively spent his entire career proving this same point. The problem is that, with this film, Larraín’s run out of any new visual ideas and gone all-in on one very bad concept structuring (The Club co-writer) Guillermo Calderón’s script: a relentless voiceover from Oscar Peluchoneau (Gael García Bernal), the supercop assigned to track the fleeing Neruda down. The poet is depicted as a very familiar type of universally beloved Force Of Nature: regularly giggling in houses of tolerance alongside loving sex workers, holding rooms spellbound with poetic declamations, generally being an undeniable vortex of seductive energy. Nothing representationally new here, but Neruda’s also a great temptation for an antihero pursuer tasked to kill the thing he loves. Peluchoneau can’t even go on the radio to denounce Nurge and urge public informants out of the shadows without turning dreamy: “The poet is a public menace and an unforgettable lover,” he blurts out to the listeners, and that’s not nearly as floridly overheated as it gets in there.

Peluchoneau’s desire to clamp down on the source of intertwined dual ardor and pursuit isn’t a contradiction: it’s a mirror of the way Larraín is locked in a thematic death embrace with Pinochet’s legacy, and he’s starting to lose the aesthetic fight. Post Mortem doubled down on Tony Manero‘s look to greatly diminishing returns, and Neruda is similarly a visual reprise of The Clan that makes no thematic sense. In that film, ugly fish-eye lenses hazed errant priests and blown out windows emphasized how concealed from the outside world they were. Here, Larraín’s DP keeps breaking out the stretchiest, blurriest and least prepossessing lenses and back-lighting like Janusz Kaminski on a bender, with more random flares and momentary blow-outs than in 10 years of aggregate late Spielberg. Sunk by arbitrary visual retread and intolerable voiceover, Neruda is a failure of great ambition. Larraín’s Jackie — a biopic of Ms. Kennedy Onassis, playing later here direct from Venice — finds him getting out of Chile, hopefully to reinvigorating effect.

Maren Ade’s Toni Erdmann has been rapturously received pretty much across the board, which makes it a little strange that I find it harder to commit to anything stronger than “this is a very, very good movie.” The film’s 162 minutes pass as swiftly as possible, with no time to abstractly admire how well it’s made, and I experienced no post-screening cumulative wallop. In her sophomore film, 2009’s Everybody Else, Ade kept pace with the heart attack impact of Modern Romance; here, she’s taking it relatively easy on both her characters and the audience.

Ade’s interview with Mark Peranson shows she certainly wasn’t taking it easy on herself. It’s worth reading the interview in full, but some quick takeaways: writing the screenplay took nearly two years, and no scene could be written unless Ade knew what space she would be filming in, so location scouting and writing became the same process. There are 2,000 extras strewn throughout, footage captured totaled to 100 hours, and each scene was shot some 10-12 times from the perspective of one character before being shot the same number of times from the perspective of another. The term “world-building” generally refers to TV series, but it’s apter for Ade, whose seemingly casual naturalism has been constructed in every conceivable direction. The handheld style seems almost calculatedly rough around the edges, simulating the sensation of watching classic verite; this illusion is sustained through carefully written and performed, definitely sculpted narrative scenes, a heavy feat.

Ade’s lead, Ines (Sandra Hüller), is a consultant operating in Bucharest. The film’s extended prologue takes place back home in Germany, establishing the less-than-close relationship between Ines and her retired father Winfried (Peter Simonischek). He’s late to her birthday party, though the shoe’s not all on one foot: taking the place of the usual family film bad dad who needs to learn to spend more time with the kids, Ines keeps having to go outside to talk on the phone. She’s subsequently less than thrilled when Winfried arrives in Bucharest for an unannounced visit — understandably, as he keeps gently/disruptively scolding her immersive, humorless commitment to high-paying corporate work.

The normal thing to do would be to have the loving jokester of a father slowly reveal to his misguided child the error of her ways, which is not precisely what happens here. When Winfried showily worries if his daughter is “happy,” she doesn’t miss a beat. “What do you mean by ‘happy’?” she asks, stonefaced; it’s a big word, does he want to define it? For something like the full first hour, Ines displays absolutely no personality outside of her work-centric tunnel vision. Then she has to go to the mall and says dad might as well tag along to see something special: “It’s Europe’s largest mall and no one has any money to buy anything.” This flicker of analytical humor, removed from the niceties of daily work intercourse, is the first indication of an intelligence and sensibility cultivated outside her total professional package. The more we see Ines alone, the more we realize she’s an intensely self-contained person with a deeply strange sense of humor, who takes clear and evident delight in performing her sometimes-headhunting job well while remaining slightly, necessarily detached from its function and (if any) greater values. That makes this very funny film a sort of tragicomedy about two people whose struggle to reconcile radically different conceptions of what a good, fulfilling life looks like while maintaining familial affection: it’s not that Ines can’t accommodate or respond gamely to spontaneous horseplay, it’s that she wants something her father can never understand as being of true value to herself.

One song choice should perhaps not be spoiled, but — after Everybody Else‘s killer deployment of “To All The Girls I’ve Loved Before” — confirms Ade as scarily skilled around at taking ubiquitous ’80s tunes and permanently rewiring their connotations. Bubbling under all this family drama and corporate comedy is a keenly skeptical attitude towards the value of the EU’s capitalist expansion. A good bit of the dialogue is bloodless, functional English lingua franca, a necessary but slightly awkward constant, and it makes a kind of mundenly sad query like “Tell me something about the Romanian young managers” even funnier. It would appear, from what I’ve written, that there’s nothing I dislike about this film and a great deal I esteem about it — a second viewing, it seems likely, will have me joining everyone freaking out over it.

Pedro Almodóvar is certainly not unique in having a distinct set of thematic preoccupations — a preference for narratives about women rather than men, a matrix of certain lurid colors, and a penchant for filling up frames with meaningfully cited books and paintings — but, at his thinnest, he definitely seems more like a successful business #brand returning to the same reliable looks than a continually vital artist. He’s established a viable, long-term career, aligning in the US with Sony Pictures Classics early on — as far as foreign directors who regularly get global release go, he’s figured out quite a lot, and I begrudge no one mastery of necessary pragmatics.

Julieta, Almodóvar’s latest, begins with as on-brand an image as imaginable: a bright red top’s creases rise and fall with a woman’s breath. Bright colors and sex implicitly lurking somewhere in the corner, Alberto Iglesias’ lushly, increasingly trite anxious score hinting melodrama: this is instantly recognizable Almodóvar terrain, but this awkwardly structured movie takes a while to unfold its ultimately not-that-mysterious story. Middle-aged Julieta (Emma Suárez) is going to move to Portugal with her lover, until she abruptly decides not to without explanation. In mid-’80s flashback, a younger Julieta (Adriana Ugarte) in a sort of Melanie Griffith crop-top wig travels on an amusingly period-hideous train clad. Here, dutifully restrained naturalism begins to give way to something more interestingly distanced, or at least perversely non-natural: the train is plainly a set with rear-projection in the back, and the garish artificiality is fun, or at least intriguing. (Almodóvar and his costume team clearly have a blast with this time period: the collection of outre earrings throughout is especially fun.)

I’m reluctant to spell out the rest of the narrative, whose few surprises are best left that way. There’s a marriage, a metaphorical sea that turns turbulent as the relationship does, and an inexplicably malevolent Mrs. Danvers-type maid whose interference leads to tragedy. (SPOILER, but not really: this is precisely the kind of melodrama in which the words “I think I’ll go out for a sail” can only result in bad things.) The ultimate story is of attempted reconciliation between a mother who wants everything from her child and a daughter who only wants to be left alone, for perfectly understandable and sympathetic reasons. While the dramatic arc’s velocity often stalls in the front half, Julieta accrues some real emotional heft as it explores a parent-child dynamic with no happy parties and no easy solution. The film is, I suppose, half-recommended.