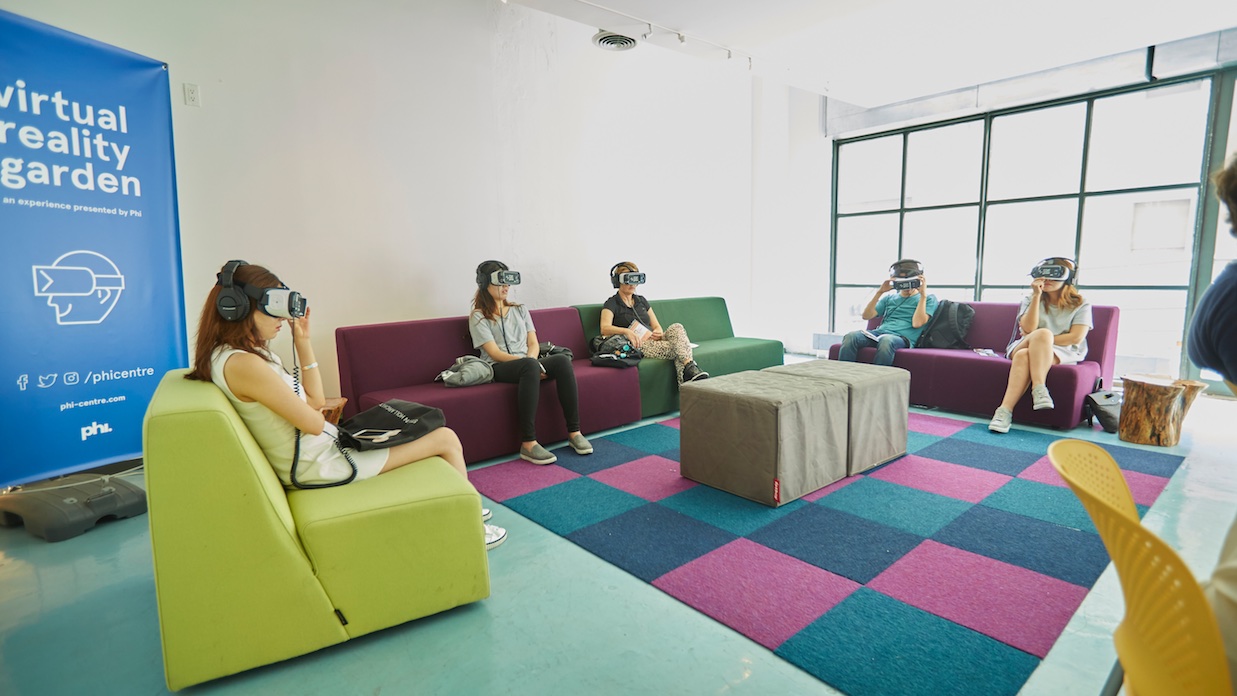 by Audrey Ewell
in Festivals & Events, Filmmaking, Transmedia
on Sep 19, 2016

One focus of this year’s IFP Film Week is on the future of cinema in the form of Virtual Reality. A little background for those new to it:

There are currently two ways of creating immersive worlds. The first wave and most common is spherical video, where you strap a bunch of cameras all together in an outward-facing circle. This approach has the familiarity of using cameras, but the viewer can’t physically move through the space — they’re akin to a locked-off tripod with a 360 swivel head, planted in one spot as characters and the world moves around them.

Then there are computer-generated spaces, like video games, where the player can freely roam, but the geometry of the virtual space must be built and the characters manually modeled, and the photo-realistic sensation of spherical video is lost. VR is different from video games in that it’s attached more to our senses, and it’s more immersive.

There are also headsets now that allow you to wander physical spaces so that you’re not a fixed-point camera swivel head, but you have to be in a location specific space with sensors. But there isn’t currently a large-scale exhibition infrastructure in place for this.

So a challenge in the coming years is to find a way to build 3D models that allow creators that same freedom that videogames have, but with photo-realism and free from site-specific constraints.

At a panel titled “Volumetric Filmmaking – Designing Participatory Stories,” two representatives from Scatter, an immersive media studio, spoke about the challenges and opportunities facing creators in the VR space.

Yasmin Elayat, Creative Director and Partner at Scatter, proposed that storytellers should think of themselves as designers. For the creators of these immersive worlds, control over the narrative should be less of a priority. They need to think about how people are feeling, about the tone, about all the elements that exist outside of narrative. At Scatter, the company approaches it as a design challenge, one that changes the fundamental role of filmmaker to designer. So in a fundamental blurring of traditional filmmaker/audience roles, the director designs the world and creates rules of engagement, and then they give full reign to the audience to explore and engage and lead the narrative however they want.

Alexander Porter (Scatter Creative Director and DP) spoke to the challenges of framing. Where traditional filmmaking has the inherent “beautiful constraint” of dealing with a frame of cinema, in VR that frame has disappeared. Now choreography and stagecraft are prized over the well-composed frame. Some of the practical challenges he laid out:

* How do you frame for a 360 view? (You think about it top-down.)
* It becomes about laying things out spatially, instead of framing them in a box.
* There needs to be something interesting almost no matter where you look.
* You have to influence and guide where the audience looks, and they’re exploring ways to achieve that. ( * Sound is one obvious tool in directing audience attention, but it’s not always enough.
* They don’t yet know what the best way to do this is — most everything in VR is open territory right now.

At the “Cinema in the Age of VR Panel,” Kane Lee (Head of Content at Baobob Studios, a VR animation studio) said that we’ve had a century to figure out how to focus the viewer’s attention in a rectangular screen and how to best tell the story.

In VR/360, people are having to build a new toolkit. In Baobob’s short animated VR film, Invasion, a spaceship comes in from behind the viewer, and it was initially cued just with audio. Kane said that when tested with an audience, only 50% turned around. Then they figured out that if they had you engage with a character in the world (a bunny) that stays in view and goes with you as you turn, it created a connection between you and the bunny. So when the bunny looks toward the location where the spaceship is about to appear, you look where it looks, so it becomes a question of choreography. When they made that change, 99.9% of the people looked in the right direction.

Benjamin Dickinson (director of Creative Control and the VR short Waves) related that there’s so much entertainment that he feels numb with all of it, and that the things that peak above the noise are the things that feed him and heal him. He thinks people are looking for a spiritual connection, and that VR may be a space for that.

Lily Baldwin (director of the forthcoming VR film, Through You) cautioned that the “wow factor” of VR — quick sensory impact — only goes so far. She added that it’s not about just making an enhanced film: a film needs to be viscerally moving in some way, and it should be treated as a different form than traditional films (which several speakers referred to, half-jokingly and half-derogatorily as “flatties”).

Yelena Rachitsky (Creative Producer, Oculus Studios) noted that you can detect phoniness much more quickly in VR, because it’s like you’re present. Authenticity is much more important.

This reminded me of Porter pointing out that in VR, all the characters are the same size as you, and his claim that it inherently creates a kind of intimacy. Not having personally tried any VR headsets yet, I wondered about that, especially given that Rachitsky said that acting in VR is a huge problem right now. More experimentation is required so actors can see why things are working or not. Cinema relies on close-ups to convey emotions, and that tool isn’t available to VR filmmakers.

So what’s next in VR? Oculus Rift is the groundbreaking headset that everyone knows about, the one that pioneered the current wave of virtual reality. But there will be 50 or so new headsets (actually called Head Mounted Displays or HMDs) emerging through 2017. And Google is rolling out a VR platform next month called Daydream, which requires a controller.

Like Baldwin, Porter cautions us against focusing exclusively on the technical side: “If we fixate on the tools, we miss the point; we have to focus on the story. VR affords us the opportunity to make inclusive and participatory stories, and it’s up to us to figure out how to create them.”

He compared the emergence of VR with the famous (though probably untrue) story of the reaction of the first audience’s panicked reaction when they saw the Lumiere Brothers short black-and-white film, (L’Arrivée d’un train en gare de La Ciotat) of a train arriving at a station — and seemingly heading straight for them. And while tales of the audience running in fear may be manufactured, there’s no doubt that at the beginning of a new thing, there’s an opportunity to jolt people out of their everyday experiences.

One key difference is that the astonished 1896 audience had this experience together. And for now at least, engaging in the immersive worlds of VR is a largely solitary experience.

Rachitsky spoke to that point. She noted that when you laugh in VR, you do so by yourself, and laughter is often a way of communicating with others. Social VR is going to happen, and she said she’s curious about what that creative content will look like: “How do we put multiple people in a space and still guide the viewer somehow? It’s all about experimentation and testing.”

After catching these panels, I wandered over to the VR Garden, at the IFP’s Made in New York Media Center, where several short animated VR and live action documentary VR films were available. Never having tried on a headset before, I was immediately struck by how physically cumbersome and uncomfortable it was. I couldn’t get a clear focus on any of the live action films (the animated film fared better), and I did feel nausea as I looked around. These are serious setbacks. But I can’t deny the “wow factor” in feeling so immersed in a world. In one film, I was in a boat, floating on clear blue water, and it was really relaxing. Note the language used: I was in a boat. That’s how it feels.

And to Porter’s point about the intimacy created by feeling yourself amongst people, as opposed to watching them? It’s 100% on point. A baby in one “scene” gurgled and smiled at me, and I was extremely tempted to smile back: to interact with it. As an avid gamer and film viewer, I can say that I’ve never felt that degree of empathy for any character in any other medium. And that, I think, is where the real potential of VR lies.