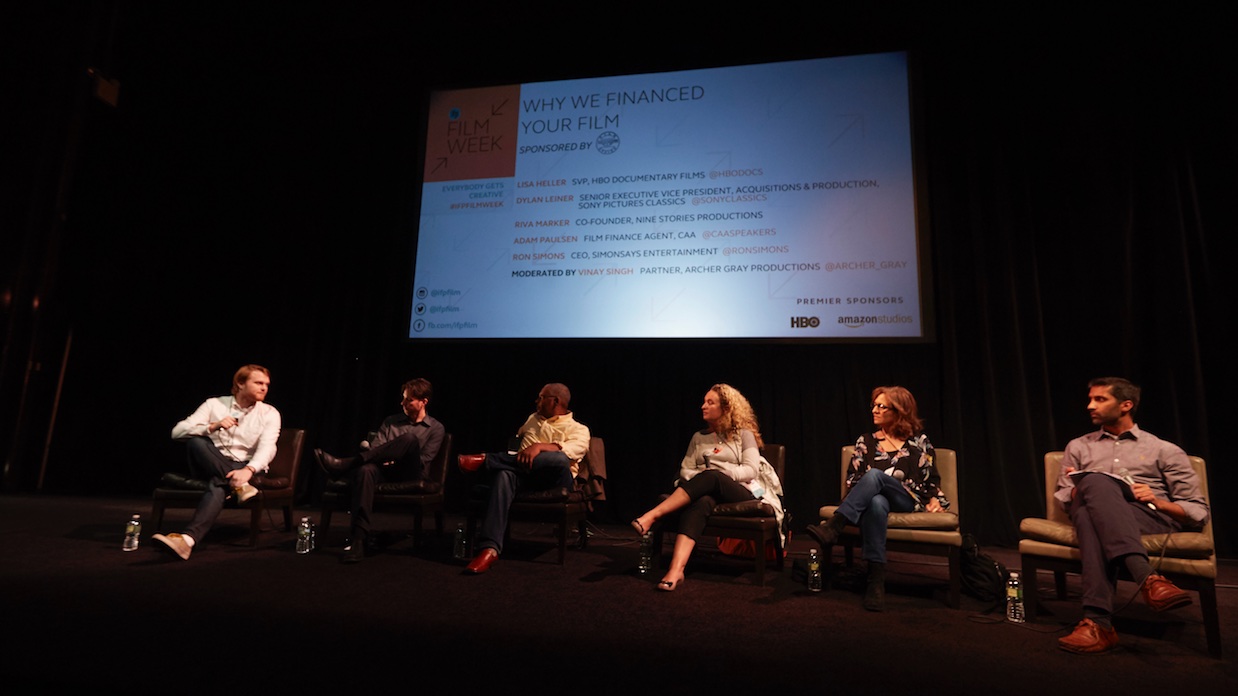 The "Why We Financed Your Film" Panel at IFP Film Week

At the “Working with the Right Agent” panel at IFP Film Week, one thing we heard a lot of is that it’s a business of relationships and connections.

Peter Trinh (International and Independent Film Agent, ICM) says that for big agencies, it’s impossible to look at everything that gets sent to them, so he pays a lot of attention to what the people he trusts recommend. Since his pile of scripts would be literally impossible to read in its entirety, he’s much more likely to read the ones he’s heard good things about.

And to that point, he says it’s important to create relationships of your own in the industry. You never know who you’ll get connected to who will connect you to certain agents. But do your homework — agents have different tastes — so look at what they’ve worked on before.

Furthermore, the agents all talk to each other. Everyone wants to work with other people, and the agents share with each other what they love. So just because one agent passes on your project, they might also pass it on to someone for whom it might be a better fit. It should go with out saying, but: always, always be professional.

This theme was repeated at another panel, “The New Festival Experience,” where the programmers discussed some of the nastier replies they’d gotten after sending rejection letters. Angry responses ranged from “I know you didn’t watch the film” to the eloquent “fuck you.” Then there was the time Cristen Aery Clear (Manager, Episodic Storytelling Initiative at the Sundance Institute) was sent a photo of excrement. “Don’t do that,” she advised.

So what can filmmakers do to help their chances of being accepted? Well, in some ways it’s a numbers game. The Sundance Film Festival gets 12,000 submissions and programs 3-4%. But a high percentage of films that go through their Institute in the form of labs, grants or other programs end up screening at the festival. So it makes sense to see if any of their programs area good fit. On top of that, Clear echoed the sentiment from the earlier panel: “All the support organizations talk to each other and recommend projects — networking, and applying to all these programs is a great way to get your foot in the door.”

Dan Nuxoll (Program Director, Rooftop Films), agreed: “You’re going to get rejected from a lot of film festivals, but you can still build relationships.”

At the same time, Lindsay Peters (Market and Industry Director, Frontieres-International Co-Production Market) advised filmmakers to be transparent. “If you’re talking to multiple festivals, you can just say so. Let the smaller fest know that you’re waiting on a bigger one: often the programmers will just talk to each other and speed up the decision.”

And Tom Hall (Executive Director, Montclair Film Festival) notes that a festival life is one year. If you get into a smaller fest but you’re waiting to hear whether you got into a bigger fest, and you have to pass on the smaller one, you might want to go back to them the next year, at the end of your film’s cycle, to see if they want to screen it then.

Over at the “Why We Financed Your Film” panel, the producers, distribution and programming execs, and agents discussed the “flattening” of content — the current trend of new technology and traditional entertainment becoming conflated, and most people watching films and episodic series at home.

Dylan Leiner (Senior Executive Vice President of Acquisitions and Development, Sony Pictures Classics) says that it’s vital right now that we focus on the sustainability of what we all love: film culture. He lauds film festivals as a place where we can all go and talk about movies and appreciate them as it all happens in a really energetic way with an experience we can’t have on our couches as we shotgun a series.

At the same time, Adam Paulsen (Film Finance Agent, CAA) notes that deep-pocketed tech companies are radically altering the domestic festival and acquisitions landscape, and the festivals are increasingly kicking off with pre-buys because they’re guarding against Netflix.

Final hot tips from each panel:

Lucy Stille, on choosing an agent: “You need someone that understands your work and that you have a rapport with. It has to be someone you connect with, and not just the best, brightest and shiniest agent. All careers have ups and downs; who do you want to talk to when you’re down?”

Tom Hall, on building a festival strategy, when everyone basically has the same goals: “Find another project that is similar to yours, a film which had a trajectory or outcome that you aspire to, and you emulate it. Also learn from their mistakes. And always have a plan A, plan B and plan C.”

Panelists at “Why We Funded Your Film” resoundingly agreed on the importance of a quality lookbook, proof-of-concept short, or rip-reel to sell your idea at the pitch or script stage. This is especially important if you’re a first-time feature filmmaker. As Leiner noted, people rarely submit them with a screenplay, so it sets your project apart.