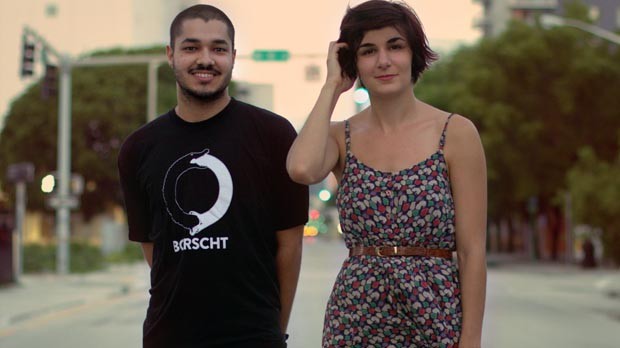 It’s a bit of a cliché, an American independent filmmaker making a film inspired by a classic French art film. But Jillian Mayer’s Life and Freaky Times of Uncle Luke, which played Sundance and SXSW this year, is a work of such whacked-out originality and manic invention that it exists in a cinematic alternate universe far away from all the Truffaut-aping first-timers. Calling itself a “modern Miami adaptation” of Chris Marker’s 1962 meditation on time travel, love and mortality, La Jetée, Uncle Luke finds Luther Campbell of 2 Live Crew as the last man on earth, fighting for the First Amendment and against nuclear radiation, all within the cosmic slop of Mayer’s cartoon-inspired installations. Both very smart and gleefully nuts, it is of a kin with other work from Mayer and partner Lucas Leyva, including three other shorts that played SXSW this year. Those include Jacuzzi Boys: Glazin, “a fake fan video,” for the band Jacuzzi Boys featuring “vagina puppetry.” The short got 700,000 views on YouTube before it was taken down. “There are many vaginas on the Internet,” observes Mayer, “but ours were too silly.”

A Florida International University graduate born and raised in Miami, Mayer has exhibited her installation and video work all over the world, including at the Guggenheim Museum’s 2010 Play show. She says she met Leyva, a filmmaker and “retired playwright,” when she applied to the Borscht Corporation, his “interdisciplinary microbudget independent production house” for funds to make a “conceptual talk show for people and their pets.” “We thought she was a crazy cat lady,” recalls Leyva, who is also founder of South Florida’s wonderfully eclectic Borscht Film Festival. “But then we had her come into the office and we found she wasn’t crazy at all.” In many of their pieces, Leyva writes and produces, and Mayer directs. “Jillian studied visual art, I’m from theater, and our collaboration is learning how to make movies together.”

Between the two there are many other projects, including Mayer’s I Am Your Grandma, “an autobiographical video blog” in which Mayer speaks to her unborn grandchildren through the exhibition medium of YouTube. The video is up to almost two million views, and has inspired copycats, fans and haters, all of whom share some degree of confusion about Mayer’s motives. But while there is always a serious theoretical underpinning to their work, the pair “always try to make it so entertaining that anyone can appreciate it,” says Leyva.

Mayer and Leyva draw inspiration from artists like Ry Rocklen, Cory Arcangel and Cindy Sherman but also from their hometown. “It feels like we’re part of a young movement down here, defining Miami culture as something other than beach boobs,” Mayer says. Among their many upcoming projects, she continues, is a first feature, “a pop musical about a band I’m in that only sings about Internet-related conspiracy theories. It’s called Post-Modem — both the band and the film.”

Concludes Mayer, “We don’t have a traditional understanding of film, so nothing is going to come out right. It’s always going to be weird. We always wonder what it would be like to make a film with people talking to people in a bedroom, but we have no idea how to do that.”