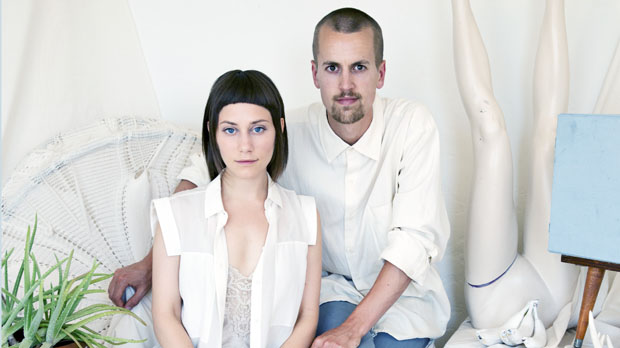 Pete Ohs and Andrea Sisson have a pretty decent meet-cute story. While so many filmmaking couples meet on set or in film school or at a festival, this pair of Ohio natives met while hanging out at a waterpark in the suburbs of Cincinnati. She was an airbrush artist, he was drinking beer with a friend who tended bar, and they circled each other for years within the cities’ burgeoning DIY art scene before becoming an item and quickly marrying. Sisson, 26, whose background includes a Fulbright Fellowship and studying fashion design in Iceland, convinced her new love to travel to the far-flung Nordic country to help her with a film project. “We went to Iceland two weeks after we got married,” remembers Ohs, 30. “So not only is it the beginning of figuring out how to work creatively with someone, it’s also living together for the first time. There was a lot of shit going on.”

The resulting experimental documentary, I Send You This Place, tells Sisson’s story of spiritual transformation in an austere and exotic Icelandic netherworld. The film is both a memoir and a work of travel journalism, openly and proudly philosophical. The otherworldly beauty of the place — one where the locals think of the mountains as things to be talked to and 24 hours can pass without having sunlight rise or darkness fall — is a springboard for her own surprisingly accessible ruminations about identity and existence. Made with money from Fulbright, it is true artisan filmmaking — the couple itself is responsible for not just the shooting and directing, but also cutting, music and color correction. “We took it as an opportunity to see what we could do together,” Sisson says, “so we started shooting the film, making music for the film, all together. The narrative film we’re going to shoot this year started in Iceland.”

An official selection of the 2012 Full Frame Documentary Film Festival and the 2012 Reykjavík International Film Festival in Iceland, the film opened for a brief commercial run earlier this summer, but Ohs and Sisson  – who also go by Lauren Edward, a composite of their middle names – are already onto other things. Beyond Everything Beautiful is Far Away, the microbudget narrative project they’re currently developing that they describe as “a dystopian fable about a man named Lernert, his robot girlfriend and a beguiling young woman who traverse a desert planet in hopes of finding a better life,” they’re already at work on another feature doc, Releasing a God, that in some ways is a sequel to I Send You This Place.

Having recently relocated to Los Angeles, the couple is curious and oddly hopeful about trying to tackle the studio beast. “We live up on a mountaintop. We can see the Hollywood sign,” Sisson says. “Obviously it’s very Hollywood out here. And we’re very much from the indie world. We’re artistic. But yet, we’re curious about what that bridge will be and how to help make it, how to see independent film become a bigger part of the mainstream.” —B.H.