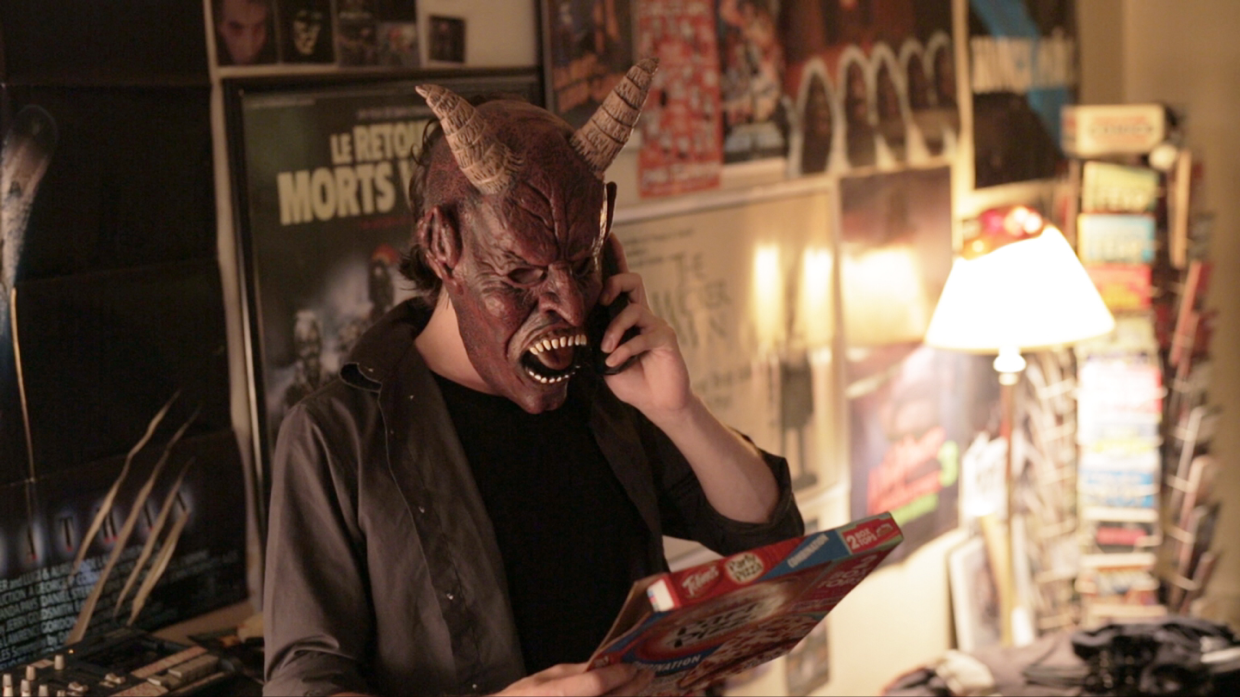 Joel Potrykus’s Buzzard is either an extremely difficult or very simple movie to embrace. On the one hand, it contains enough juvenile/dumb/low humor to elicit honest guffaws alongside of-the-moment ’90s nostalgia to appeal to those of us raised on horror VHS tapes and Nintendo. Insults are clever and land with precision. The characterization of idiot manchild culture is somehow at once both obvious and insightful. More challenging to embrace, notice or even appreciate are the film’s formal risks. Our introduction to Marty Jackitansky (Joshua Burge) plays out in an absurdly extended single shot as he engages in what is soon revealed to be a scam with an off-camera bank employee. The decision to introduce not just the character but also the film in this way presents a microcosm for Buzzard as a whole: simple enough to seem lazy, with characters superficially stupid enough that nobody correctly identifies them as clever. But appearances are deceiving and, in fact, the choice — and it is a choice both bold and confidently executed — to begin the film this way is anything but slack. If Aki Kaurismäki or Roy Andersson did it (to name the two filmmakers whose work Buzzard most immediately recalls to me), it would be justly regarded as elegant, sly and minimal in that sort of ineffable European “comedic” way where you probably don’t realize something is funny until somebody else, somebody smarter, perhaps, is laughing. The film’s centerpiece moment — another single shot that feels like an eternity, where Marty goes to town on a plate of spaghetti and meatballs — brings back this minimal aesthetic in a way that, were it in a film by one of the aforementioned established masters of a droll nothingness-based humor, would excite even a casual viewer of international arthouse cinema. Here, it veers close enough to slob-like disgust that it would be easy for some to overlook the true sturdiness of the filmmaking.

Buzzard plays a deft game in concealing its politics. On the one hand, the film could be seen as a rallying cry for the dispossessed office drones of the nation. Unlike most contemporary independent cinema (including, I must say, my own), the film exists far outside the blue state, upper-middle-class milieu where the characters are superficially relatable for, or at least understandable by, the audiences who tend to watch these things, either at film festivals or by making an increasingly complicated effort to track them down. Deep in forsaken, economically annihilated, anonymous-looking Michigan where Potrykus (who, full disclosure, I am quite friendly with) makes his home, the film presents defiantly disengaged and apolitical characters in a subversive bit of commentary on the vast legions of mid-level Americans in middle America. It’s impossible to imagine Marty or his moronic cohort Derek (objectively handled at all times and played with idiotic glee by Potrykus himself) voting, registering or being aware of the societal and economic issues that have resulted in them living such terrible lives, struggling to scrape together a few bucks. It is easy to imagine them collecting action figures.

The recent attention paid to the “stunted development” narrative in popular films and television is, sure, valid and interesting and critically rich. What Potrykus does in Buzzard (and also in his debut feature Ape) is essentially riffing on this theme, minus the money, class and culture most often provided these childish adults. Recall the grown men in The 40-Year-Old Virgin playing video games on a nice television set in those ridiculous video game chairs with speakers built in. In Buzzard, it’s 8-bit Nintendo and characters have to provide their own controllers, which naturally they just happen to have with them. It’s the exact version of adulthood I would have wished for myself when I was eight and couldn’t conceive of a world beyond junk food and video games. Potrykus embellishes this idea and does something uncommon: he presents his characters as occasionally complacent. Complacency is often denied more well-off protagonists, the stories dictating that it must come from within. In Buzzard, it can come from nothing more than a shower, some pasta and a properly stocked basement-turned-party zone. The film’s pleasures lie in the straightforward joy these material and superficial pleasures bring to the unreflective characters.

Too much true independent cinema these days strives for the Hollywood (and marginally smaller “Indiewood”) mode of subjective storytelling. The pleasures of these films, such as they are, come from having the exact pre-agreed upon buttons pressed for the viewer in exactly the right order, eliciting the sole response the filmmakers intended. Objectivity in any cinema is increasingly rare, and certainly un-American. Buzzard’s observational qualities, both cinematic and narrative, invite no judgment. The film’s lack of manipulation or reliance on traditional storytelling beats prove Potrykus willing to shape filmmaking as it suits him, creating work that adheres both aesthetically and narratively to the peculiar corner of society in which it takes place.