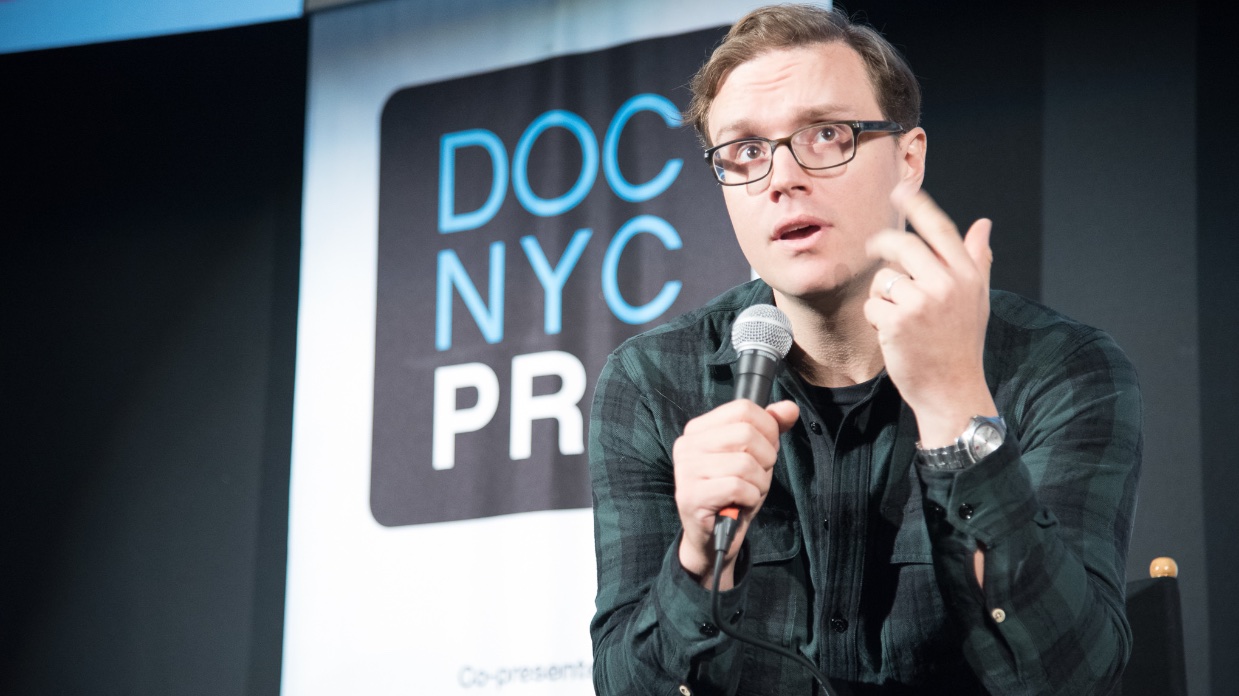 by Audrey Ewell
in Festivals & Events, Filmmaking, Post-Production
on Nov 16, 2016

On Sunday I attended two editing-focused events at DOC NYC PRO. The “Morning Manifesto” was delivered by Matthew Hamachek, editor of films including Cartel Land and Amanda Knox. Later that afternoon, veteran editor Geof Bartz, Supervising Editor at HBO and a three-time Oscar winner, gave a masterclass on what to do when the pieces don’t fit. Having recently taken the Edit Center’s six-week Art of Editing Course at the IFP Made in New York Media Center, and currently assisting on the edit of a feature doc with a lot of moving parts, this seemed like a good way to spend the day.

Here are the takeaways from these veteran editors on editing documentary features.

A relationship with the director is key.

According to Geog Bartz, the key to being a professional editor is to form a great working relationship with the director.

Hamachek agrees: “You have to realize that this [film] is their baby. You’re coming in for a year, probably, at most, but they’ve been shooting this for two to three years, probably, and maybe financing it with their own credit cards at first. Then you come in, and they ask you to make it a coherent story. Your job is to make this part of the process as painless as possible, and that’s a challenge every step of the way.”

Tips on getting started with the edit.

Bartz’ routine is to first watch all the footage, however many hundreds of hours there are. When he was starting out, he would take extensive notes, but now he just spends a lot of time going over the material with the director/producer and talking about the subject of the film.

Then he wants to be left alone. “The editor is the surrogate audience, they weren’t on set, and don’t know how hard it was to get a particular shot, etc.”

He adds that good editing comes from your unconscious, and it’s hard to be in touch with your unconscious if you’re talking all the time. Having the director or even an assistant there can be inhibiting.

Hamachek says that one of the things he learned early and still does on a lot of movies is to create an individual sequence for each character. “Everything you’re doing as an editor, micro to macro, is creating an arc. Once you have that for each character, you’re ready to start bringing it together. And then, of course, everything falls apart, because you don’t need to have the same beat for each character at the same time.”

Bartz likes to start at what he thinks is going to be the beginning of the film, find something that engages him and sees where he takes it. For example, in the film Larry Kramer in Love and Anger, about the playwright and AIDS activist, Bartz started the film with a moment that made you want to know who this guy was — a scene featuring Larry Kramer on a panel, berating the audience. There was a complicated context, so he stripped it down until it was just the raw, visceral emotion. And then a character say,s “It’s the story of one man who said no, and then another person said no, and then another, and that is how you start a movement.” The opening sets up a character and plot within the first couple minutes while leaving you wanting to know more.

Ways of working with, and thinking about, the footage.

No matter the type of film, Bartz works off selects. Archival films are often structured with interviews or by a writer. Some directors write treatments and then you’re basically working off of a script. With verite, it’s more about finding meaning within the footage.

Bartz says, “Editors do their best work when they act as scientists. ‘Lets see what happens if I do this?’ [Then] I play around with it. It’s a lot of experimenting with things.”

One question Hamachek likes to ask is, “If we were making a fiction film, what would we be doing here? If we were just writing this, what would [these characters] be doing?” It’s all psyching yourself out to try new things and see things from a different perspective.”

Often in films, there are pieces missing, times when the director and crew just weren’t able to capture a key piece of the story. Bartz is a big advocate of using music as he edits, and when this happens, he likes to create story moments out of mood, and tone, and character. Maybe it’s a character getting dressed, getting in a taxi, or using various b-roll. Depending on the style of the film, there might be other tools like text on screen, narration, or character voiceover on top of evocative imagery that perhaps emotionally represents the moment that wasn’t captured.

Sometime the director and editor disagree on how to solve a problem. Hamachek says this happens multiple times on every film. “You come up with all these intellectual reasons for what would fix it or why it doesn’t work and get into arguments” he says. But it’s important, he continues, to always say, “Let’s try that and see if it works.’” He also recommends bringing someone in who doesn’t know the material, have them watch the scene and then to describe in their own words what’s happening. And, finally, Hamacheck says to always be blunt with yourselves and ask about a particular troublesome scene, “What is this actually doing for us?”

As far as test screenings, Hamachek says to listen to people’s problems but not their solutions. “Test audiences don’t know what other material you have,” he says. “But listening to what bugs them helps. Often times, though, people don’t say they have a problem with something; they’ll say, ‘I would like to have more of this.’ So in a non-defensive way, you have to get to the heart of what they’re saying…. Even if they just say your film sucks of if they’re really confused, just appreciate that they came in and gave you their time.”

How and when to end.

Anyone who’s finished a film can tell you that it can be hard to pinpoint the moment that you’re done. Often, external factors like having the money run out, or needing to hit festival or delivery deadlines, determines that for you. Internally though, it can be tricky as well, and the final stretch is the most critical.

Bartz likens the process to writing. “I’ve been doing this for 50 years,” he says. “There’s that 10,000-hour thing, where you become a master. I’ve done this for 100,000 hours. At this point, if I’m really stuck, I’ll say, ‘Screw it, I’ll figure it out tomorrow.’ And sometimes, something happens. And sometimes, you’re just on the wrong path. Editing is writing. You need periods of quiet, and lots of coffee, and just to be left alone sometimes. “

Hamachek echoes this: “If you have a problem you just can’t fix, and you keep getting the same note, you just have to go on and trust your instinct and stop working on it. And that’s really tricky, because there’s a lot of false peaks in editing. You get to a certain point and you think, ‘Oh, we finally did it – the story makes sense, the characters work, we did it!’ And then someone comes in and doesn’t get it, and you have to start pushing yourself again. And the last five percent you do is the most important. This is where you tighten and squeeze and really bring out the theme in the movie. And that’s what makes a movie great. We spend a year talking with directors about what a movie is about and then at the very end, it changes.”