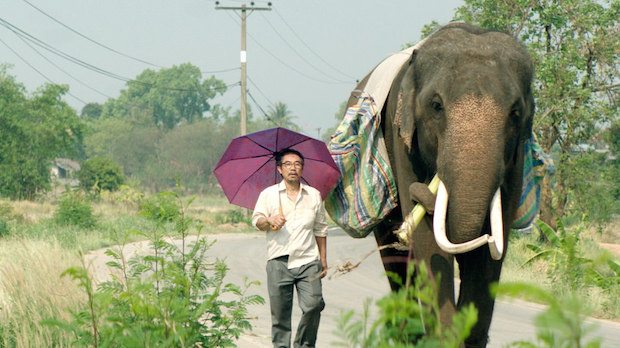 How can you make an elephant communicate different emotions? This was a challenge I found myself saddled with during the production of Pop Aye. Obviously, there’s a tight balancing act involved here. I did not want the elephant to be cloyingly expressive or overtly cute — we’re not making a children’s film here.

I wanted him to have the same kind of nuanced and naturalistic performance as the rest of the actors in the film. Obviously, as an animal, the elephant was in a constant state of just “being” and there was no way he could over-act, so thankfully in that regard I was safe.

Still, it was important at times to imbue him with slight hints of emotion. Given that my elephant tends towards an unchangingly stoic facial expression (even more so than Keanu Reeves), there were limited means in terms of coaxing performances of differing emotional pitches out of him.

Even though he always has the same deadpan expression, I realized that when this expression was intercut with different shots, it was immediately imbued with different meanings. When juxtaposition was augmented by sound design, the ability to communicate various moods was made even clearer.

There was a moment at the end of the film where he looked into the camera and held his gaze in a stoic close-up. There was a real profound sadness to his eyes but just beneath the frame, we were actually popping bananas directly into his mouth to keep him still. Obviously, you wouldn’t have known that just by watching the shot.

All of this made me realize that communication is not merely an expression of the subject but a constant dialogue between how a filmmaker chooses to frame something — be it aesthetically or emotionally — and what a viewer elects to take from it.