“We Never Wanted to Treat the Film as a Comedy”: DP Christian Sprenger on Brigsby Bear 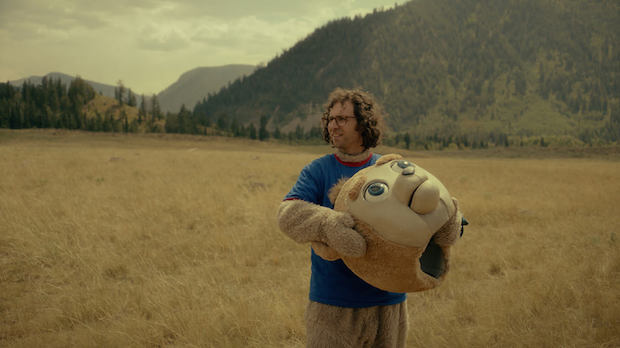 In 2007 a group of four comics and creators joined to form Good Neighbor, a sketch comedy team that would go on to breach the ranks of Saturday Night Live. The group is known mostly for Kyle Mooney, a weirdo comic voice whose left-of-center SNL skits often get cut for time. Mooney stars in Good Neighbor’s feature film debut, Brigsby Bear, directed by fellow group member Dave McCary. The film tells the story of a secluded young man with an unhealthy obsession with a TV show literally no one has ever seen. Below, DP Christian Sprenger speaks to the film’s tricky tone, which eschews straightforward comedy for an approach more in line with Hal Ashby’s Being There. The film makes its world premiere at the 2017 Sundance Film Festival.

Sprenger: Back in 2014 I met producer Will Allegra and Lord and Miller on a pilot for Fox. They sent me the script for Brigsby Bear in early January of 2016 as I was packing to move apartments. I sat on the empty floor of my boxed up apartment and read the whole script. I immediately called Will and told him how much I loved it and asked when I could meet Dave McCarey. Dave and I met up a few days after and very quickly knew that we wanted to work together telling this story.

Sprenger: My main goal for Brigsby Bear was to frame this story in as honest and realistic a way as possible. The film is about an incredibly sincere young man who has a wildly unique social and cultural upbringing and we wanted to treat that story with respect and elegance. I wanted the visuals to feel natural and believable, never taking the audience’s attention off of James’ story. For the TV show, I went to great lengths researching and testing different old cameras and formats. The Brigsby Bear TV series spans 20-plus years and so it was important that not only the footage felt real but that the production value evolve in both quality and technology.

Sprenger: During my first meeting with Dave McCarey, I asked him very bluntly to explain what the tone of this film was. He told me Being There directed by Hal Ashby. “What a perfect answer,” I thought. Even though we had a lot of funny people in the film and many light hearted moments, we never wanted to treat the film as a comedy. We were interested in filmmakers like Joachim Trier, Todd Field, Jeff Nichols; directors whose work almost seems to transcend a genre definition. We spoke extensively of Roger Deakins and Greg Frasier’s use of moody naturalism and their way of silently selling a world to an audience without them noticing. Then of course, we watched many many ’80s children’s live action television shows.

Sprenger: As with most independent films, we had a very short shooting schedule paired with a very modest budget. Brigsby Bear became a non-stop exercise in creative scheduling so as to always be taking advantage of the right time of day.

Sprenger: The film was shot with the Arri Amira. I have become quite fond of the Amira because of its handheld ergonomics and a sensor that can shoot close to open gate in the 4444XQ codec. I chose Cooke S4s for their clean and soft cinematic look. For the Brigsby TV series, our 1st AC Justin Watson developed a vintage hot-rodded Sony DXC-3000A CCD studio camera which he modified to record digitally in Apple ProRes422.

Sprenger: I wanted the lighting to unobtrusively follow the narrative as much as possible. For the underground scenes I used very utilitarian lighting, harsh practicals, colorful earth tones, and electric colors motivated by monitors and screens. While most of the film above ground is very naturalistic, we also had an ’80s children’s show to light. Gaffer Cody Jacobs and I set out to embody the approach of an amateur filmmaker shooting a low budget kids show in 1985. It was a very fun shift for all of our brains for a couple of days.

Sprenger: One of film’s early pivotal scenes takes place in a desert in the middle of nowhere, at night, both above and underground. Not only did this scene require lighting several wide desert exterior angles, it also featured an off-road police and FBI raid stunt. This was our production’s biggest hurdle and it took weeks of planning, countless scouts, maps, overheads, story boards and scheduling to properly execute but at the end of the day, we pulled it all off.

Sprenger: A few weeks prior to the film’s final DI, I sat down with our colorist Ian Vitovec, from LightIron LA, to discuss my intentions for the look. During preproduction, I built a solid collection of film and photography references that I shared with Ian prior to the DI. Ian has such a deep understanding of color science and an incredible eye for moody naturalism. His work brought a look to the film that felt natural yet unique while still preserving the original photographic integrity of what I shot.