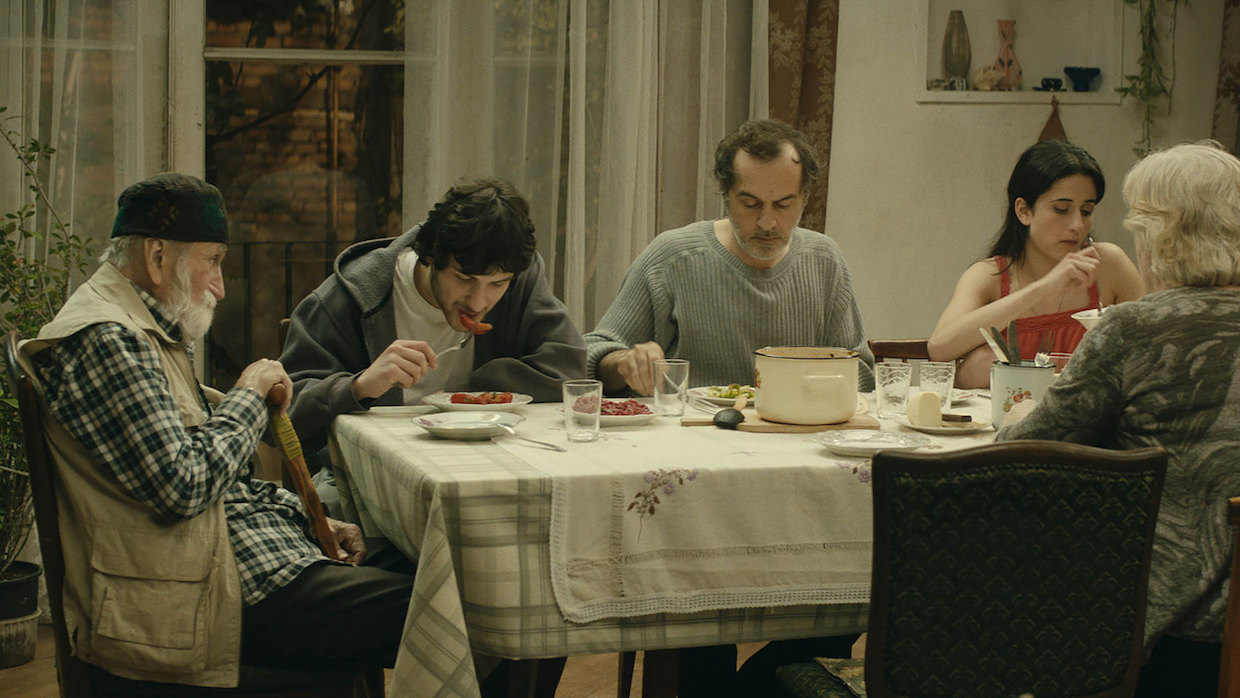 Antonio Santini and Dan Sickles’ Dina is incredibly hard to write about without exposing my underlying biases. Shot by DP Adam Uhl in almost entirely rigorously locked-down static 1.66 (!), Dina tracks the uneasily evolving relationship between its title subject and fiance Scott in the months up to and after their wedding. (She’s the main subject, he the supporting player: the end credits cutely add his name to the title.) Both are, by their own admission and diagnosis, somewhere on the spectrum — where precisely is unclear, as it so often is — and in something like love. The major issue, which becomes increasingly squirm-inducing as the film goes on, is that Dina’s a sexually experienced lady for whom regularly expressed physical affection and a healthy carnal diet is non-negotiable, while Scott shirks even in the face of simple hand-holding: when they walk together, he holds her left hand gingerly, as if pinching her by the wrist. There’s much more to Dina’s personal history that the film hints at, then — abruptly punctuating its otherwise linear progression — explicates in two major pieces of backstory (one video, one audio) that radically deepens empathy for her sometimes harrowing life.

Dina’s disabled and unable to work, Scott’s a Walmart employee; she spends hours watching the Kardashians, he tries to calm her when she’s mad by pulling up Richard Marx’s “Right Here Waiting.” This is the hard-to-write about part I mentioned: there’s nothing wrong with any of this, but a life staged among the rubble of the most ubiquitous, least imaginative elements of homogenous corporate culture spazzes me out. And that’s my problem, I’ve spent too much time in New York and my classist tendencies are strong. In any case, what really scared me wasn’t that but a few little things — Scott’s over-rigorous shaving strokes with a safety razor seems like begging for 14 different cuts every time; I had my hands over my eyes — and the big compatibility issue. I thought, of all things, of The Palm Beach Story, a movie about money, love, and how incompatibility regarding the former can negate the latter. Dina and Scott share a bond, but it’s the panicky kind, in which she gets worked up over what he can’t do and he tries to push himself into the realm of adult sexuality. This is a serious, non-trivial dilemma and Dina deserves a lot of credit for venturing into terrain most movies aren’t comfortable enough to acknowledge. I’m not worried about exploitation: the film’s made with the clear comfort of all those participating (Sickles has known Dina since birth), with no suspicious glances towards the camera. It’s a little bit of a horror show, but, again, I suspect that’s probably mostly my problem.

I know I kind of implicitly promised in my first dispatch not to return to Donald Trump in these write-ups — but when Our 45th President becomes part of the diagesis, there’s not much of a choice.  Towards the end of the film, there’s a brief conversation between Dina and Scott about Donald v. Hillary — they’re both #WithHer, but not for any particular substantive reasons. Dina says (paraphrasing from memory) that she’s not really “into” politics, and I thought about this during my next film, Jonathan Olshefki’s Quest. Both films’ subjects are Philadelphians: Dina’s in the burbs, while Christopher “Quest” Rainey and his family are proud residents of northeastern Philadelphia. But Dina isn’t a political film, and I’m not saying that like it’s a flaw or that it somehow fails because it isn’t — it’s a luxury baked into the POV of its subjects, because they’re white. Quest and his family — wife Christine’A, daughter PJ — are black, not particularly well off, and in an area where shootings are a regular thing. They’re not political by choice, but because their entire lives are inherently political: it’s either that or ignore everything about how their neighborhood and lives came to be. The film starts just during Obama’s first election, and almost the first thing we hear is a query as to whether someone has voted.

Quest runs a Friday night freestyle studio, a place where he can try to grow “a sense of friendship, a sense of worth.” He’s intensely community-aware, his childhood shaped by crack’s arrival in what he pegs as 1983; there’s hardly any part of his family’s life that doesn’t vector into a national discussion about systemic racism and political exploitation. But Quest isn’t a film about activism, per se: it’s about a family striving and struggling against a constant stream of local and national political noise. The years pass, we see Obama giving one of his innumerable press conferences on gun violence, and it presages daughter PJ herself getting caught in stray bullet fire. The TV is often on, but — unlike Dina’s house, where it’s all celebrity shows and Sex & The City — it’s almost always the news. PJ getting shot prompts a visit from the local CBS station, and Quest unloads about how his neighborhood’s been left for dead except for the occasional visiting politician’s soundbite and a push to develop casinos rather than community centers that could help cut down on violence. The action winds up a few months before the election, with Trump’s awful appeal to blacks and Latinos: “What the hell do you have to lose?” Quest and his wife shake their heads.

Olshefski acted as a solo shooter/sound guy, and the emphasis is on immersion rather than conspicuous formal elegance: it’s trad verite, plus one of those generic ambient scores that’s the current bane of so many indies, both fiction and non-. This doesn’t make the cumulative effect any less powerful: in its streamlined portrait of over half a decade, it’s a memory rush building to an ugly national climax, and the baked-in effect is of a eulogy for any possibility of decency or tolerance on a federal level, no matter how ineffectual that might be in combatting societal ills. Quest and his family know what’s up: if Dina gets her disability benefits slashed, I’m not sure she’d connect the dots. Not to use one film to beat the other with, but they do meaningfully converse with each other in ways that say nothing good about where we’re at. (I can’t fit this in anywhere else, but I’m impressed with the decision to leave in a scene where Quest and Ma discuss the development that their daughter is gay. They’re shaken — as long as it doesn’t affect what’s happening in my house, I guess it’s OK, is basically Ma’s reaction. This is not the kind of Good, Progressive Reaction that will cheer the hearts of liberal audiences, but it’s honest and real, and viewers are trusted to respect the limitations and perspectives of the protagonists rather than being urged to suddenly turn on them. People are complicated!)

Something completely different: following up on their impressive debut In Bloom, the duo of Nana Ekvtimishvili (Georgian-born, German trained) and Simon Gross (strictly German) have made another film in Georgia, the rather heavily-titled My Happy Family. Manana (Ia Shugliashvili) has decided to leave her husband of 30 years, which means moving out of her family’s apartment. This does not seem inexplicable: her mother is a perpetual kvetcher and harasser and there’s a total lack of privacy. Her decision does not go over well, nor does her refusal to explain herself. Halfway through, Manana’s decision is retroactively validated when she learns something that shouldn’t be spoiled; otherwise, this is along the lines of An Unmarried Woman without the desire for any kind of Alan Bates-type figure to show up.

Nana & Simon (as they’ve helpfully/pragmatically chosen to be billed) operate in a familiar post-Dardennes/Romanian New Wave vein, using handheld camera in often inelegant spaces; it’s the type of naturalism that, at this rate, has a ceiling on the amount of enthusiasm I can master, but they’re extremely deft practitioners. The takes are often long and clearly meticulously choreographed, but rarely conspicuously so. Domestic violence against women in Georgia is an issue that could have been tackled in a much more literally murderous way, so points for not making the easy button-pushing activist film that they could’ve. At bottom, this is a film that once more dramatizes The Royal Tenenbaums‘ tagline: “Family isn’t a word. It’s a sentence.” Manana spends two hours having both men and women repeatedly explain to her why it’s in her best interest to stay in touch with them or allowing them to dictate her life, without acknowledging a shred of autonomy or a need for independent life: close-knit ties as thinly disguised parasitism. Only caveat, nothing major: the big scene in In Bloom, where a young girl in stress is forced into a group dance situation only to get into it and blow everyone away, is here revisited in a scene where a distressed Manana must perform for a group of her classmates and, to her own surprise, kills it. Maybe next time a new pivot point is called for, but Nana & Simon are the best thing to happen to Sundance’s world narrative competition section in years.