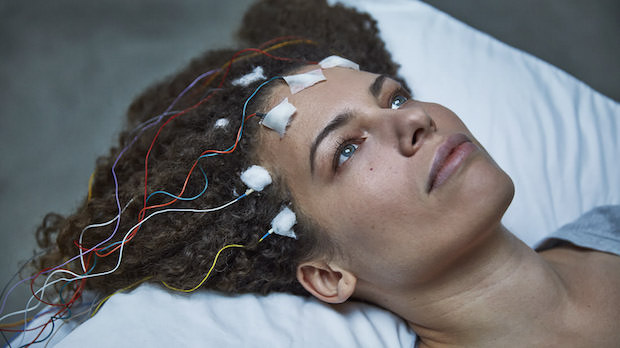 by Filmmaker Staff
in Editors, Interviews, Sundance
on Jan 25, 2017

Jennifer Brea had a challenge: to make a film from bed. Brea was a PhD student at Harvard when a sudden illness left her bedridden. She sought to create a documentary portrait of her experience and found support from labs at Sundance, IFP and elsewhere. She premiered Unrest, her debut film, in competition at the 2017 Sundance Film Festival. Kim Roberts, an editor and writer on the film, spoke with Filmmaker about what drew her to the project and finding the right tone for a story this personal.

Roberts: I chose to work on Unrest because of a personal connection. My mentor when I began my career was the brilliant director/editor Deborah Hoffmann (Complaints of a Dutiful Daughter, Long Night’s Journey Into Day). When she got sick with Chronic Fatigue Syndrome (ME) about eight years ago, she seemed to disappear overnight. She became housebound, unable to see friends and colleagues except online. This film offered me the chance to reconnect with Debbie creatively, who worked remotely as an EP and creative advisor on Unrest, as well as to better understand the disease that stole her from our filmmaking community.

Roberts: I wanted to distinguish this film from the typical disease doc by highlighting the humor, the love story, and the detective story of this woman trying to understand an illness that the medical community has ignored. We also wanted to immerse viewers in the experience of living with this disease in a way that felt experiential rather than expository.

Roberts: The director, Jen, had been recording herself for years on everything from iPhones and iPads, 5Ds, and even a RED camera (we used a ton of footage from the iPhones, none from the RED camera). The self-filmed material helped us create an intimate, visceral experience of what it’s like to be trapped in your own bedroom. It also allowed for intensely personal moments between Jen and her husband Omar as he cared for her through her illness.

With first-person documentaries, developing the director’s voiceover is a great opportunity for finding emotional depth and humor. Her voice helped us to shape a strong, main through-line for Jen, with natural excursions to meet other characters.

In terms of our (many) feedback screenings, the most exhilarating were at the Summer ’16 Sundance Edit lab. The lab encouraged experimentation at all levels. It inspired us to rethink Jen’s narration, the way we used the self-filmed material, and how we crafted some of the movie’s more subjective moments.

Roberts: I went to the Stanford Documentary Masters program where I made a pile of short films. I then worked as an assistant editor and was fortunate to work under some wonderful editors. Deborah Hoffmann gave me my first chance as a Second Editor on Long Night’s Journey Into Day.

Roberts: I used Premiere — which was a first for me. The director chose this software long before I came onto the project, because for a first-time filmmaker, getting a wide range of materials into an edit system was a lot more straightforward with Premiere. I was wary at first, but Premiere did a great job of managing everything from 25fps PAL to cell phone material.

Roberts: The ending was the most difficult, because we were trying to wrap-up four different stories in a way that felt satisfying and real. A chronic illness doesn’t lead to tidy endings — our characters don’t get better. Yet that doesn’t mean every day is a tragedy. We had many versions of each wrap-up, playing with tone. Some felt like we were trying to force a happy ending, others were too pitying. Jen also auditioned many versions of her ending narration. For the final moment, we decided music and pictures alone delivered nuance and emotional resonance without the need for more voices.

Roberts: Mindbomb, our graphics team, created a look for our graphical sections that added style while preserving the film’s intimate feel. Bear McCreary, who is an amazing composer of fiction movies, created a really unique and moving score for the film that helped take it to the next level.

Roberts: Often at the end of a documentary, I return to an appreciation of the film at its most basic. When everything else is pulled away, the strength of Unrest is being able to follow, in an unflinchingly intimate way, this enormously intelligent woman as she grapples with the unthinkable – an illness that takes away everything she values in life. That story is also the most universal.