“Filmmaking Is a Series of Crushing Compromises”: DP Daniel Katz on Sidney Hall 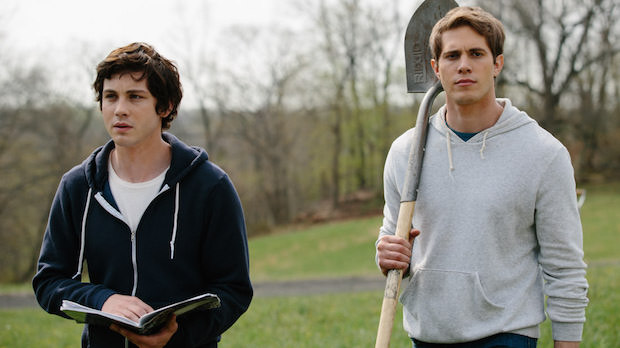 Shawn Christensen’s second feature following his Oscar-winning short Curfew, Sidney Hall chronicles the tumultuous life of a writer at the ages of 18, 24 and 30. The film boasts an impressive cast (Elle Fanning, Kyle Chandler, Michelle Monaghan, Nathan Lane) to supports its titular lead, played by Logan Lerman. Below, cinematographer Daniel Katz speaks to Filmmaker about the cameras, lenses and lighting approaches he used to distinguish each era of Sidney’s life. Sidney Hall held its world premiere at the 2017 Sundance Film Festival.

Katz: I had photographed Shawn Christensen’s Academy Award-winning short film Curfew and went on to shoot his feature debut Before I Disappear, which was based on Curfew. I think it’s the classic example of better the devil you know…

Katz: The script was so bloody good and the cast that was brought together so talented that I really tried to get out of the way of these things. There is often a natural inclination to embellish with the photography when the material isn’t first rate or you are trying to play smoke and mirrors to conceal some other shortcomings. This was not the case here. The main goal was to create a consistent narrative thrust to the three different eras in the film and make them have mystery and a certain ambiguity but not have them become confusing. There is much intercutting between eras in the film; respectful orientation for the audience so they can immerse themselves in the dramaturgy was critical. Of course…all the best-laid plans go out the window when the film is in the edit!

Katz: At [age] 18 I would say early Spielberg was an influence for both Shawn and I. Twenty-four was a more contemporary look and the work Robert Elswit did on Michael Clayton wasn’t far from our minds. At 30 Once Upon a Time in the West and parts of Badlands were big touchstones. I generally use any references, film related, photographic or from fine art, as a very broad departure point; more as “what not to do” than anything else. I try and create some photographic rules on every film I do; but they are mostly related to continuity, consistency and motivation rather than high minded ideals. There is usually a shot or a lighting set up in the first few days of filming that, on a gut level, will give me an eureka moment and allow me to operate more from an intuitional place from then on. Of course this will only happen if one has thoroughly done their homework and the hard yards on the script in prep.

Katz: The biggest challenge is always time. Sadly it is a finite resource. The corollary of this is money, which broadly dictates how much time you have.

I am always attempting maximum quality but you have to cut your cloth accordingly. Battles have to be picked and babies have to be sacrificed at the altar. Filmmaking is a series of crushing compromises. George Lucas said, paraphrasing Da Vinci, that “a movie is never finished, only abandoned.” I very much subscribe to this tragic view. I try and leave everything on the field, but there are always regrets. We had 30 days to shoot, which seems generous on an “indie” film, but the script was 120 pages, took place over 12 years and was shot in two states. Inevitably certain scenes, especially at the end of the days shooting, are rush jobs, and this translates on screen.

Katz: We shot all of Sidney Hall with one camera body, the Arri Alexa Studio. I prefer this flavor of Alexa primarily for it’s mechanical shutter that, for me, renders movement in a far more elegant way. We used three different sets of lenses from Panavision New York. Primo anamorphics for 18, Primo Sphericals for 24 and C and B series anamorphics for 30.

Katz: I’ve generally moved into attempting to light “360” and the philosophy of no stands on the set. It’s an ideal but very hard to implement consistently. In terms of lamps and units I had a pretty well worked-out system per era. Mostly natural light and small units for 18. Kinos and LEDs for 24 and only Tungsten units including Dichroics for 30. We had a small G&E team with limited additional days, so balancing the right amount of equipment for efficiency becomes of primary importance. Aesthetically, we definitely lived in the “heightened naturalism” universe where verisimilitude to motivation gets balanced with the inner world of the characters.

Katz: Anything with Homer, Sidney’s dog at age 30. He had a penchant for staring directly into the camera with uncanny regularity. We failed miserably; he was mostly cut out of the movie!

Katz: We shot to SxS in Pro-Res 4444. I would have liked to shoot ArriRaw for the extra malleability but it was prohibitive for a number of factors. I did no on set grading and developed no LUTs. I abhor video village.

We monitored in Rec-709. I built the look mostly in camera but I have spent a lot of time in color grading and I’m fairly experienced now with the parameters. Jerome Thelia graded the film, he also did Curfew and Before I Disappear with Shawn and I. We are all friends and share a lot of the same sensibilities so the process is pretty painless. I find most narrative color grading ends up being about consistency and continuity. We were pretty true to the “original negative” and when we weren’t it was mostly popping faces or creating subtle secondary windows.