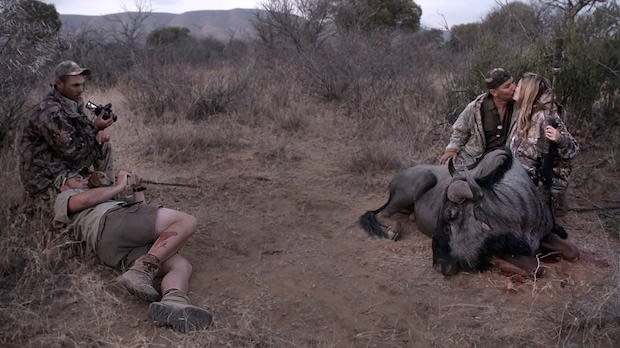 Shaul Schwarz and Christina Clusiau are the cofounders of Reel Peak Media, a production company that prides itself on documentary work of both “journalistic integrity and cinematic quality.” Both filmmakers began as photojournalists before making the move to documentary cinema. On Trophy, Schwarz and Clusiau served as DPs with Schwarz acting as director. Their film explores the worlds of big game hunting, breeding, and wildlife conservation. Below, the two discuss these issues ahead of Trophy‘s premiere at the 2017 Sundance Film Festival.

Schwarz and Clusiau: Since we are directors who started as photojournalists, we end up shooting the majority of the films and projects we develop.

Schwarz and Clusiau: The artistic goals of the film was to place the viewer in the heart of the African hunting environment. We wanted the viewer to feel the people and the animals up close and personal. We also wanted to document animals through the bizarre point of view of commodity. After all, that is the way the characters see them and they make the case for a model of conservation based on economic value.

Schwarz and Clusiau: Our biggest influence is both having long careers in photojournalism. We always believed that the cinematography should be part of the access and so it was key for us to stay a very small team. But although it was challenging we always made a point to use a diverse set of cinematic tools to make the film look big as we believed this subject of the film deserves to be.

Schwarz and Clusiau: Carrying a lot of gear as a two person crew was hard. Depending on the shoot we had to figure out the logistics of charging batteries with limited electricity at hunting camps in the African bush. Also, some of the hunts were physically challenging was and took a lot of endurance. We had to make sharp choices of what cameras and gear to use so we could walk with 15 miles a day if needed.

Schwarz and Clusiau: When we began production on this film three years ago we were using Canon C100 and Canon 5D’s. A little over a year ago we moved to the Sony FS7 and Sony FS5 but we are still using Canon 5D’s for our movi and other things. We love the look of the Sony FS7 and Sony FS5, but we also love using Canon 5D cameras. They are light and versatile, allowing us to be more discreet at times and not so invasive to the characters we are documenting. We use Canon lenses also — a variety of them all depending on the scene, distance, and look we want for that specific part of the project.

Schwarz and Clusiau: The world in which we were entering into was so richly colorful that we wanted to use as much natural and available light as possible. In order to keep a natural feel we made the decision to not light interviews but instead use what light was already there.

Schwarz and Clusiau: One of the most difficult scenes was filming an anti-poaching team as they carried out a raid on poachers in a village deep in Zimbabwe. We had been on the road for six hours and by the time we arrived at the place where we were shooting it was really dark. There was no moonlight and no electricity. The only source of light was from small handheld flashlights and, looking back, the limited light added to the aesthetic of the scene. We didn’t sleep for over 36 hours on that shoot and went back to camp with what ended up being a very intense scene in the film. Getting the cameras to perform in such darkness was difficult. We were pushing the limits of what was technologically possible. In the end we just kept shooting, putting trust into the gear and using the surrounding resources to make it work. And it did.

The other very emotionally challenging scene was filming an elephant hunt. We walked for three days and then the hunt happened so fast. We quickly understood that most of the scene would take place after the gun would fire. We both cried and filmed for the first few minutes. We carried light gear that day so it was a challenge to figure out how to film the aftermath of the hunt cinematically as we only had a C100 and a 5D.

Schwarz and Clusiau: For the most part, the film was colored in the way we envisioned it. Using the DI process to enhance the colors and feel that was already there.