“A More Elegant and Softer Image Inspired by Turn of the Century Painters”: DP Kat Westergaard on Novitiate 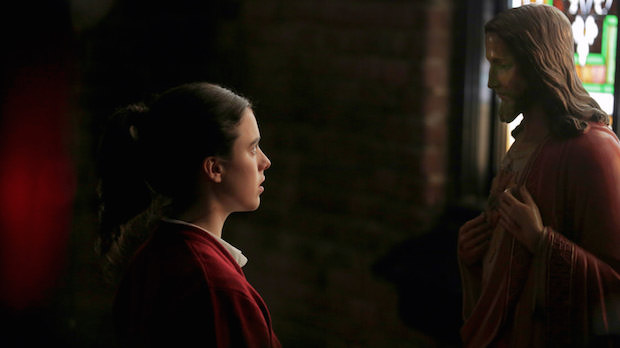 Director Maggie Betts and DP Kat Westergaard became creative partners on The Carrier, a 2010 documentary that premiered at the Tribeca Film Festival. The two worked together again on a 2014 short (Engram) and again on Novitiate, which debuted at Sundance last week. The film marks Betts’ fiction feature debut and stars Margaret Qualley and Melissa Leo. Westergaard spoke with Filmmaker ahead of the festival about the film’s painterly aesthetic, lighting challenges and “ghostly intimacy.” Novitiate will screen in competition six times during the 2017 Sundance Film Festival

Westergaard: I have worked with the director of Noviate, Maggie Betts, for years. Our first project together was a documentary in Africa, The Carrier, about an HIV positive woman in a polygamous family in Zambia struggling to protect her unborn child from contracting the disease. Maggie and I realized right away that we had a very similar aesthetic and shared a visual language. We had been talking about this project for some time before pre-production, before even the script was complete, so I feel like I had a great opportunity to get inside the material early on. It was a huge benefit to grow the film’s aesthetic at the same time that the project was being developed. Having an existing relationship with a director is also a huge benefit, even when crossing over from documentary to narrative.

Westergaard: I wanted to give this film a more formal and filmic look, as well as convey the emotional journey of our main character, while keeping her at a slight distance. Maggie wanted the audience to feel as though they were peering into a world not their own, creating a kind of “ghostly intimacy,” like an invisible spectator.

I love handheld cinematography, but for most of this project we chose to go in the opposite direction – a more elegant and softer image that was inspired by turn of the century painters. We did use a handheld camera – but only when shooting the interior of our lead’s house during her childhood.

Westergaard: We were lucky enough to shoot in this beautiful old convent filled with dark wooden rooms and large original windows. I specifically looked at Rembrandt portrait paintings as well as John Singer Sargent for inspiration. Specifically the almost washed out dark grays, coppers and hunter greens of their backgrounds and the creamy skin tones. I wanted the convent to have a lot of texture – especially Mother Superior’s office and rooms, to feel almost heavy to the audience. These painters were a great reference.

One of the biggest influences ended up being the location, trying to pull out as much of the existing atmosphere the place had and let you soak in it for the duration of the film. I wanted everyone to be located as part of the environment, part of the convent, with a little emphasis on Sister Cathleen to push her slightly more into the foreground.

Westergaard: Working almost exclusively on real locations. Working with a cast that was cloaked in black. It was challenging to try and execute a lighting plan that allowed for this texture that we so wanted – but also allowed us to use enough light to see into the black nun costumes, and separate our characters from some of the darker sets.

Working according to more “traditional” film aesthetics, and trying not to distract from the period setting, but with the sensibility and budget of an indie film, so finding creative ways to distance the look from the edgier, more kinetic camerawork of more modern films, without just looking “old fashioned,” especially considering we were shooting digitally, as opposed to on film.

Westergaard: We shot on the Alexa with Arri master primes.

Westergaard: Luckily we were allowed to shoot on Arri Raw which allowed me to underexpose the sensor, at times quite dramatically – knowing that in post I would be able to bring up the blacks thus creating this milk textured overall look. Andrew Francis at Sixteen19 in NYC did our DI and did an amazing job of “recalibrating” our image to bring in the textured blacks I was hoping for, while still allowing for creamy skin tones.

Westergaard: We had a couple of very emotionally intense and pivotal scenes, particularly the “chapter of faults” sequence. These scenes were very long and represented a dramatic shift in the story…but due to schedule, we had to shoot them quickly. Maggie always had a very specific look for these scenes; stylized, almost spooky, and very dark. I was worried about executing this look in a dark room with 20 actors standing in circle wearing black. I was concerned I would be dealing with a lot of “floating heads.”

My gaffer Brent Bailey came up with an amazing overhead rig that allowed us to move very quickly throughout the scenes. Ultimately we created a dimmable rig that had double bounced lights and that could be controlled in sections. This approach allowed for an extremely soft, creamy light. I then underexposed the sensor to bring even more texture to the image – knowing that I would push it back up in post production. It ended up looking great.

Westergaard: Andrew Francis at Sixteen19 did a wonderful job grading the picture. Much of the film’s look was baked-in, but he pushed the exposure even further in some scenes (such as the “chapter of faults” sequence) to really push the Alexa sensor and stretch out the blacks. He did a beautiful job; when Maggie saw these scenes realized she was thrilled.