How (and When) to Hire a Documentary Editor: What I Learned Making My First Short Doc 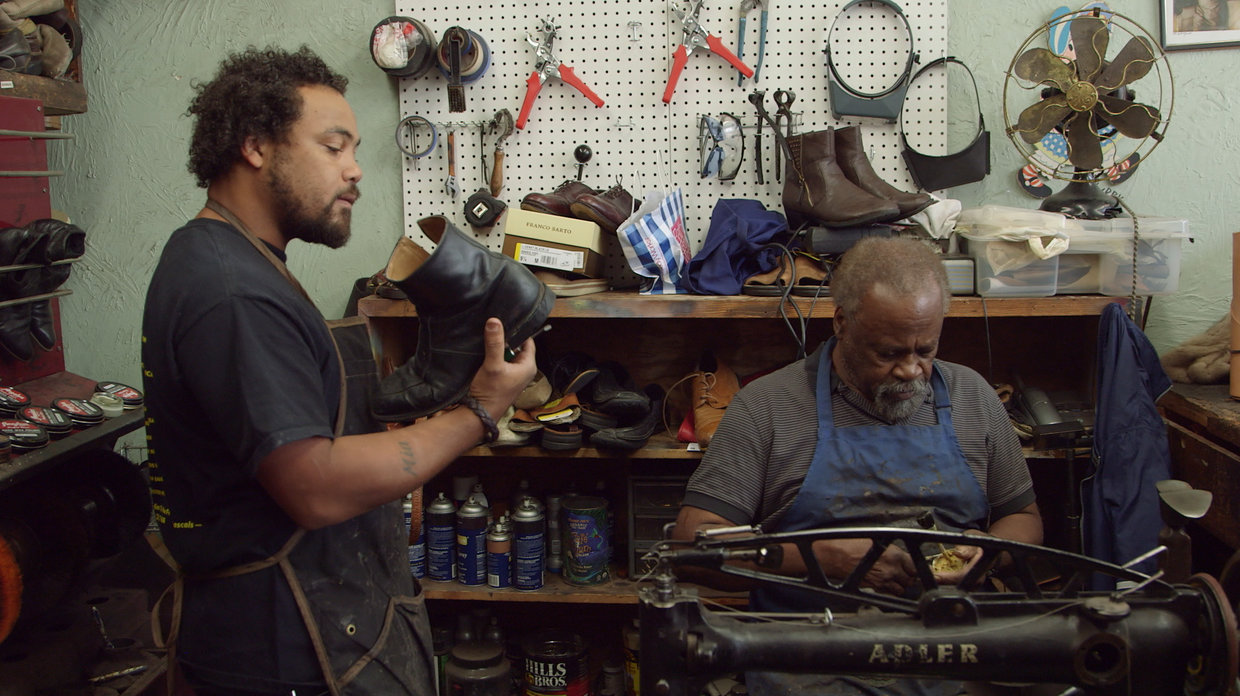 by Paula Bernstein
in Filmmaking, Post-Production
on Apr 27, 2017

After grappling with self-doubt and fretting about the narrative arc, I feel both confident in my vision and totally confused about how to shape the story. In other words, it’s time to find a good editor!

But first, a little refresher about the project: Sole Doctor is a short observational-style documentary about George, a 78-year-old African-American shoe cobbler who has owned a business in Portland for over 50 years. Preparing to retire and pass the business on to his son, Joshua, a former modern dancer, George reflects on his career.

Did I mention that this is my first-ever documentary? And that while I’ve got a Masters in Cinema Studies from NYU, I’ve never actually taken a filmmaking class?

Luckily, I’m married to an editor, and he was willing to teach me the basics of Adobe Premiere so I could tinker with the material and try to trim it a bit before actually bringing on an editor (my husband and I agreed he was not the right person for the job, for obvious reasons).

I’ve done a first pass on the three-and-a-half hours of footage we shot and managed to cut it down to 45 minutes, which is still way longer than my anticipated running time of around 10 minutes…and I know I still need to shoot some more material.

In addition to putting out a call in the local Portland documentary community that I’m looking for an editor, I reach out to some veteran documentary filmmakers and seek their guidance. Specifically, I want to know, “When is the right time to hire an editor?” and “What are the most important skills in an editor?”

I post the questions on The D-Word, the online community of documentary filmmakers, and filmmaker John Grabowska responds:

The answer is simple: the same two qualities that are requisite for every member of the crew, DP, editor, sound recordist, PA, anyone. Long ago I was searching for a composer and contacted a director whose film made me weep and asked, “Holy shit, who was your composer?” His response was the best seven-word recommendation I’ve ever read: “He’s brilliant — and easy to work with.”

So there you go. Your editor needs to be brilliant — and easy to work with.

In addition to finding someone brilliant and easy to work with, of course, I also need someone who is available, affordable, and ideally, local. I know filmmakers work with editors remotely all the time, but given this is my first time collaborating on a film project, I’d like to be able to meet with my editor in person.

As far as the best time to hire an editor, Marshall Curry (Point and Shoot, Street Fight) responds with helpful information, as usual:

I don’t think there’s a single answer to the timing question. It probably makes sense to be sure that most or all of the shooting is done. They’ll want to see what you have before committing to your project — if they don’t, that should worry you. And after they have seen raw footage, you’ll want to hear from them about any issues they foresee. It can be helpful to have the flexibility to do a pick-up shoot or two during the editing, when you discover that no one really explained that particular detail that you need, or when you want a shot of something to illustrate a key moment. But if there’s a narrative arc, ideally you will have the entire story in the can, so the editor knows where things are going as he or she starts building. It’s hard to to tell a joke coherently if you don’t know the punchline in advance.

I think that you want to hire someone with experience, who has cut things that you like, and who shares your sensibility — do they like the same kinds of films that you do, and do they dislike what you dislike? Also, do they seem to have a personality that you’ll want to spend a lot of stressful hours with? Do you like them? You don’t want to waste energy on someone who is not straightforward. Editing requires being able to give and receive unvarnished criticism in a spirit of problem solving. Someone who has a lot of ego, who is defensive or intimidating or easily intimidated can really gum up the process.

You don’t necessarily need the editor you’ll be bringing on to get perspective on how to cut it down. It could be the same person or it could be someone else. In fact, it might be a good time to go to someone very experienced who you couldn’t possibly afford and ask a favor.

As for when to bring the editor on full-time, I recommend when you feel you’re mostly done shooting. I say mostly because you often don’t realize you’re missing something until you’re at least part-way through editing. Also, and this particularly applies to feature docs, I think it’s critical to wait until you’ve raised enough money to pay him or her through the end of post-production. Good editors are expensive, and you don’t want to pay one to view all your footage for weeks and weeks only to lose them before the end. They don’t sit around patiently waiting while you go out looking for that elusive finishing funding.

As for skills, experience is important and credits on noteworthy docs are always nice. But I like to work with editors who are hungry and hard-working and see the film I’m making as a real opportunity to move forward in their career. Recommendations from filmmakers I respect is huge factor. And I do many in-person interviews. I’ll show them my fundraising sample, and I’m always eager to gauge their reaction and hear their ideas moving forward. Finally, we’ll be spending a lot of time together, often in a small space, and I need to know we can get along well, have similar sensibilities and that they “get” me and my intentions for the film. They don’t have to laugh at all my jokes, but if they don’t laugh at footage I find funny it’s a deal breaker.

I take Block’s advice and call in Greg Snider, a local Portland editor whose work I admire and who has collaborated with filmmaker friends of mine, including Beth Harrington (The Winding Stream) and Elizabeth Federici (the upcoming America’s First Foodie: The Incredible Life of James Beard). I realize he’s too busy to take on this project at the moment, but I value his feedback, and he’s willing to provide it as a favor. Mostly, what I want to know is: even in this messy state, does my footage contain anything that slightly resembles a film? Or have I just wasted the past six months?

“This is just a rough assembly that I put together myself,” I explain before he sits down to check out the footage. “It’s not a rough cut. There’s definitely more good stuff that I’m not showing you now,” I assure him.

We watch. He is quiet, too quiet.

“Your two characters are natural storytellers. George loves talking. You want that in a documentary character,” says Snider.

While Snider overall has favorable things to say about the footage, he also has some suggestions, including going back to shoot George’s weekly domino game, getting more coverage of George interacting with customers, and capturing more close-ups of George and Josh’s hands as they work on shoes.

This is all doable but it will involve at least another day of shooting, probably two, which means spending more of my own money (surely I’m not the only self-financed filmmaker who thinks, well, I’ve come this far, how can I give up now?).

He advises that I hire an editor and begin cutting the piece down even as I prep for additional shoot days.

I email a handful of editors recommended by friends and colleagues. I feel like I’m on Match.com for filmmakers. I check email every five minutes to see if anyone responds. One never writes back. I set up in-person meetings with the rest of them. “Even if we don’t end up working together on this project, it’s always good to meet creative folks in Portland!” I say.

Even though she’s too busy to take on the job, Emily von W. Gilbert, a Portland-based editor, is willing to meet for coffee. After hearing about the project and asking about my goals (“to finish this!” I tell her), she shares some helpful advice:

Until I finish this film, it’s hard to call myself a director without feeling like a fraud. But if I don’t take myself seriously, nobody else will. So here goes: I’m a director!

I imagine some directors want an editor who can merely follow their detailed instructions. But I’m looking for an editor who wants to actively collaborate and who has smart ideas for how to craft a narrative out of my footage. Obviously, I want to work with someone who is enthusiastic about the project, but if they’re unavailable or out of my price range, enthusiasm is irrelevant.

I hit it off with one editor, and we just about agree to work together when the question of budget comes up. It’s immediately apparent that she’s out of my league. A few editors tell me right off the bat, “I’m not an editor. I’m a jack-of-all trades.” They make it clear they want the work, but that they’d rather be directing their own project.

Just meeting with editors has given me a chance to unofficially pitch the project, show people footage, and get feedback. In hearing their various ideas, my own vision is strengthened. Plus, it has been a great opportunity to expand my network of filmmakers in Portland. Through these various meetings, I’ve actually made a few new friends.

I know I’ve found the right editor in Kerribeth Elliott when she tells me how much she loves my main characters, George and Josh. Elliott also meets all of my other criteria: she’s experienced, but also eager, hard-working and enthusiastic. She’s local, available, in my price range, and most important of all, easy to work with. I hope this is the beginning of a beautiful working relationship.