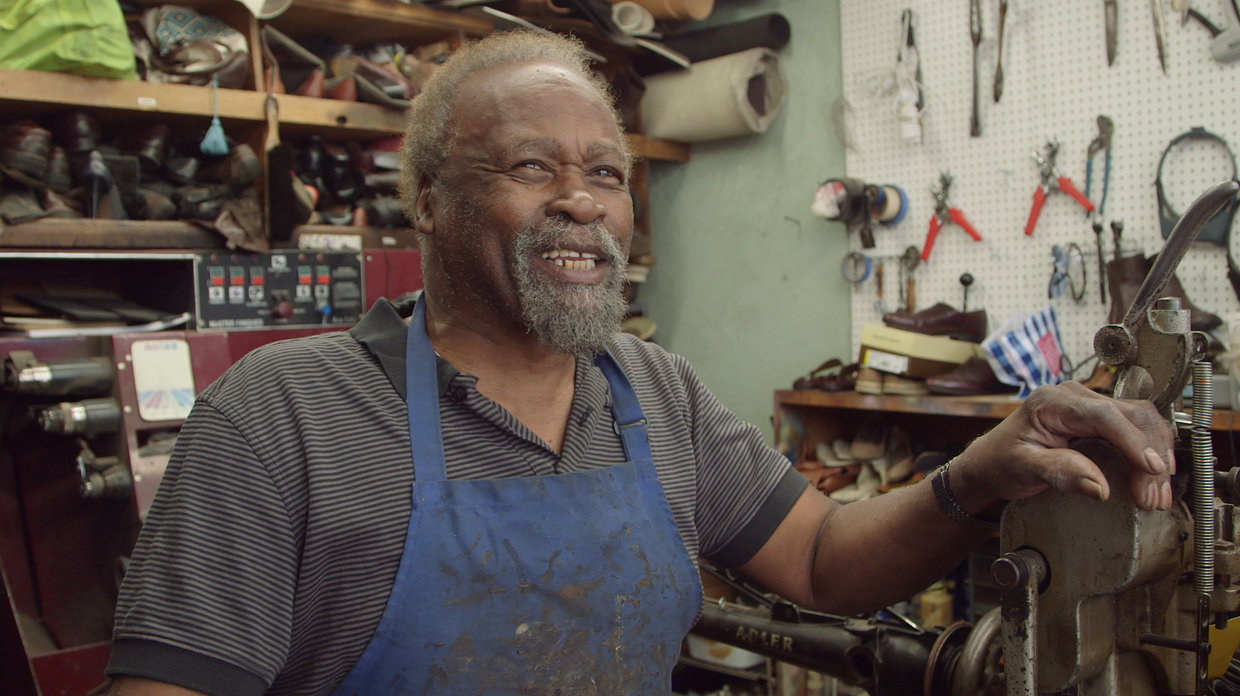 So I’m making my first short documentary. Tentatively titled Sole Doctor, it’s an observational-style film about George, an African-American cobbler who, after keeping shop for 50 years in Portland, Oregon, plans to retire and pass the business on to his son, Joshua.

As I’ve chronicled in previous journals for Filmmaker, as a first-time filmmaker, I knew enough to seek advice from the pros before proceeding, and then I made sure to hire a good DP and sound mixer. But, of course, as much as I planned ahead, I still hit some bumps along the road — like our first shoot, when we planned to film George’s domino game and his buddies decided they didn’t want to participate in the film.

Still, with two-and-a half shooting days under my belt, I was starting to hit my stride. I felt confident that I had captured some good material, at least enough to begin tinkering in Adobe Premiere (once I taught myself myself the basics of the editing software!).

I uploaded the footage. It looked so professional in Adobe Premiere — like a real film. I was surprised to find more humor in the footage than I had expected, and my subjects seemed to be growing increasingly comfortable with my presence in their small shop.

But while I fiddled in Premiere, scheduled the next shoot, and worked on building a selects reel, I couldn’t help but ponder the big question: what’s the film going to be about? Is it a relationship film about father and son? Is it about tradition, or the meaning of work? Is it about an independently-owned African-American business in notoriously white Portland?

“Who cares if I make this documentary?” “Why would anyone want to see it?” And, “Who am I to think I can make a documentary?”

After diving into this project head-first, brimming with confidence, I was beginning to wonder if the film was an exercise in hubris. I stepped away from the footage and postponed the next shoot. I wasn’t about to give up so easily, but it was clear I had hit a creative road block. Unable to move ahead and unwilling to turn back, I wondered if experienced filmmakers have these sorts of doubts or if they are first-timer jitters?

I reached out to a handful of veteran documentary filmmakers and asked them if they still have doubts about their projects. If so, how do they break the standstill and move forward?

Below are their responses and my reactions to them:

Ah yes, the dreaded “there is no film here moment,” or should I say “moments”?

There is a time in every film when I think, “What have I done, where is this going? Why don’t I just make jewelry?” Vérité  filmmaking by definition has no script, and therefore, no set beginning, middle, or end. You must look within yourself for the story. What are you drawn to, why is it occupying or even controlling your imagination? A film is an interpretation of the truth as you feel it to be. So you have to decide what truth you see and then work to be as true to it as you can.

That said, the circumstances don’t always cooperate. The characters might be grouchy or unavailable, or you can’t get a permit, or you’re out of money. Be patient with yourself, step away from it for a bit — for a few days, or a week, or more. You simply cannot rush a film. Fast storytelling is called news reporting, and it is a singular and sometimes breathtakingly impressive skill, but it is not filmmaking. Filmmaking is measured, it is personal. It requires reviewing material over and over until you feel you’ve captured it as honestly as you know it. And it comes sometimes on its own time.

PB: As a journalist who has worked most of my career writing for daily publications, it’s no surprise that I’m impatient with this process. I want to know everything now, but these things take time. I’m trying to see this as an open-ended process and not focus too much on the finished product.

But it takes a certain amount of faith and, well, chutzpah, to proceed when I still have so many doubts… So, for the moment, I’ll try to be patient with myself and let the project evolve in its own time.

I think a certain level of self-doubt is always there, no matter how experienced you are. When doubt creeps in, I try my best to focus on the good my film might do in the world rather than the good it might do for me or my career.

I also have a go-to book that’s like my bible: Art and Fear by David Bayles and Ted Orland. It’s by far the best book I’ve ever come across on the perils and rewards of making art.

Finally, there’s a saying attributed to Eleanor Roosevelt that I came across many years ago and have pinned up to my wall. It’s not just the best filmmaking advice I know of, it’s maybe the best life advice, too: “We wouldn’t worry so much about what others think of us if we realized how seldom they do.”

PB: The thing is: I’m not sure what good my film might do for the world.

Block: What good will it do? Good stories inspire, motivate, educate, provoke laughter and tears, entertain, make people think, make people see the world differently, I could go on and on.

PB: I feel a tremendous responsibility to George and Joshua since they’re trusting me with their story. My biggest fear is that they will regret saying “yes” to me.

There are always risks in storytelling. You could screw it up, yeah. absolutely. But I think if your heart is pure and your intentions are good, you try your best to think it out.

Also, remember you will expose the film to other people before you’re finished. Get feedback. You don’t have to work in a vacuum. You’ve got friends who will tell you the truth, but you want a mix of people to see it: people who are in the business who are insightful who will pull no punches, then you want people who are totally new to the whole thing because they’re your biggest audience really. It’s people who don’t know about filmmaking. Do they know what the story is about?

Also, you’re lucky because your story isn’t time-sensitive. It’s not as if it’s going to be yesterday’s news.

PB: I’m afraid if I don’t jump on it, it won’t happen. Clearly, I’m spending too much time spinning my wheels and thinking about “what if…” Instead, I should just get back to work.

Harrington: There will be a point where you go, “I think this is a really good idea,” and other people will say, “Oh, really? Why would you want to spend time on that?” But maybe your little idea can be more universal than a big idea. There’s a great likelihood it will have resonance with lots of people.

PB: That’s why I want to do it. This little film about a subject I never thought I’d be interested in has gotten under my skin. It may be about a shoe repair shop owner in Portland, but it’s also about family bonds and the meaning of work.

Self-defeating thoughts are inevitable, at least for me. So is imposter syndrome, loneliness and despair. I’ve heard that creative people often feel things deeply. In my case, that means the lows of all this can feel pretty damn dark. But even if I feel like I’m heading nowhere, I don’t like to waddle in those feelings too long. For me, the way I get out of it is to remind myself not to be “self-indulgent” — my creative block or feelings of worthlessness are really small in the grand scheme of things. Far better to move forward and make a mistake than to be inert.

To move forward, it’s important to make a to-do list and, especially if it all just feels overwhelming, to think in small, incremental, baby steps. Something that feels like progress every day. Maybe it’s sending one email. Maybe it’s an hour pulling selects. Maybe it’s writing in a journal. A phone call. Remember why you felt motivated in the first place — lean into your curiosity and where your heart is stirred.

And indeed, if the self-defeating thoughts are keeping you from making any progress at all, it may be key to step away for a short period of time. Take a hike. Stand in the shower. Eat an ice cream. Go for long drive, or a swim, and think of the big picture. Watch a whole bunch of films you admire and take notes. Do things that inspire you, creatively and otherwise. At times, drink and sleep help, and the adage that, indeed, “every day is a new day.” The companionship of colleagues and collaborators who can set you straight – it’s hard to push through if you are entirely alone.

So I took Tracy’s advice and gave myself permission to take a break from the material. I went for a hike with my golden doodle. I binge-watched Better Things. I baked an apple pie. I read a novel.

Then I slowly got back to work taking baby steps, as she suggested. I pulled some selects. I sent some emails. I rescheduled a shoot day.

Being productive has helped to keep the doubts at bay. Reviewing the footage that we’ve already shot makes me think I’ve got something here. I’m just not sure if anyone else will care to watch it.

At least after talking to these pros, I’m reassured in knowing that they’ve been plagued by similar doubts. At this point, I’m not turning back, so there’s no way out except moving forward. For now, I will set aside my doubts and trust in the creative process. Instead of worrying about what the film will be about or if anyone will watch it, I will focus on the work that needs to be done. Besides, even if nobody except my friends and family ever sees it, I need to make this film, if only to prove to myself that I can.