My First Film Shoot: A Lesson in Documentary Filmmaking and Flexibility 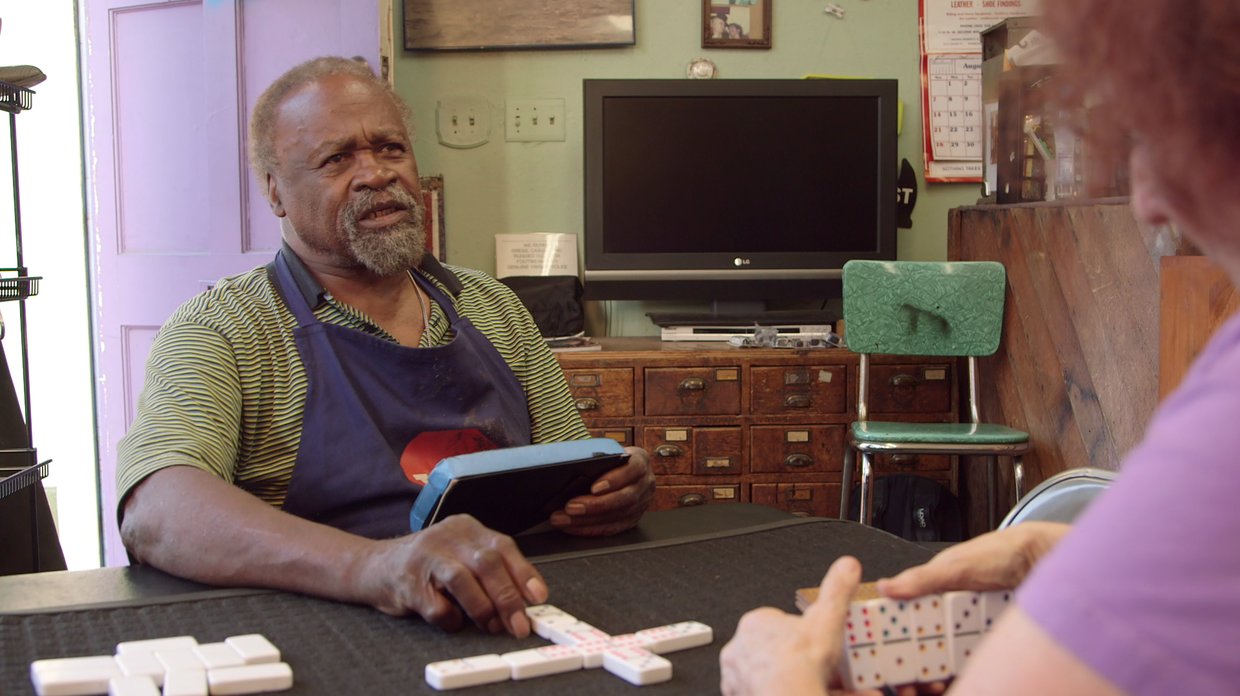 by Paula Bernstein
in Directing, Filmmaking
on Sep 26, 2016

If you need any motivation to begin production on your first-ever documentary, here’s a tip: tell thousands of people you’re making a documentary. That’s what I did when I shared the news on Filmmaker and Facebook that I was going to make my first film, a short documentary, tentatively titled Sole Doctor. Of course, I loved the enthusiastic response. But hearing, “Can’t wait to see it!” from more than 100 people sure ratchets up the pressure to deliver.

With my subject nailed down and a DP and sound mixer onboard, it was time to begin production.

For the first shooting day, I decided to film the domino game that my film’s subject, George, hosts two nights a week in his small shoe repair shop in SE Portland. The week before the shoot, I swung by the shop several times and hung out with George and his crew of regulars. The idea was for him to be so comfortable with my presence that I’d just blend in once we started filming. I introduced George to my DP, Bradley Sellers, and the two talked boxing and jazz.

I repeatedly asked George if his domino buddies would mind being filmed, and he said that aside from one who is notoriously camera-shy, the others would be game. “You sure about that?” I asked. “I’m sure,” he said. We had this exact conversation about ten times. Each time he gave the same response.

You can probably see where this is going by now. The night of the shoot, I showed up to the shop with Bradley and Paul Dillon, our sound mixer. In addition to his Canon C300, Bradley brought a China ball to hang over the domino table so we could light the game. Paul came prepared with his sound equipment, including lavalier mics for the players and a boom mic to hold above the table.

As George’s pals tricked in, one by one, they challenged me. “Who are you and what are you doing here?” asked the first guy to arrive. I began to give him my pitch, but he wouldn’t let me finish. “What’s in it for you?” he asked. “You’ve got to be making some money off this.” I calmly explained that in fact, I wasn’t going to make any money off of this film. If anything, I would likely lose money. “I don’t buy that,” he said.

I realized then how outlandish my film project must sound to this older African-American man. Why would I spend money in order to film his domino game unless there was something in it for me? I tried to explain that as a newcomer to Portland, I wanted to learn about some of Portland’s history through George. “We’ll stay out of your way, I promise,” I said. “I don’t trust you,” he said. The other players nodded.

As older African-Americans in Portland, they have, no doubt, faced their share of discrimination and duplicity. They are understandably skeptical of outsiders (like myself) moving to town. I respect their fears and concerns, and though I was tempted to give up right then and run to the nearest ground, I stayed calm. Without getting defensive, I explained how I envision the final film. “I have no agenda going into this,” I said. “I’m not working for anyone but myself.”

No response, so I tried another tact. “If you don’t want to appear on camera, we can film you from behind,” I added. “I’m not being filmed,” the leader of the pack declared. “Me neither,” said another regular player.

I could have pushed more, but it was clear there was no point in trying to convince them. I wouldn’t want to film anybody who wasn’t comfortable being filmed.

“We’ll be back once they leave,” said the unofficial spokesperson for the group as he motioned at us. The men silently marched out of the shop, leaving George behind, apologetic and embarrassed.

In that moment, I recalled what my friend, documentary director and producer Laura Nix (The Yes Men Are Coming), had told me during pre-production: “When you’re dealing with real people and real situations, you have to be really flexible and think fast on your feet and make the film that’s in front of you and not the film you thought you would make.”

I told George I was sorry I had ruined his game, but it didn’t mean the shoot had to be postponed. “Why don’t we go ahead and film anyway?” I suggested. “But who am I going to play dominoes with?” he asked. Luckily, his old friend Jackie, the only female domino player in George’s crew, showed up and agreed to play with George and to be filmed.

Maybe over time, George’s other domino friends will see that I’m not a Hollywood hustler out to take advantage of them and they’ll change their minds about being in the film. But at least I ended up making the most of the situation: in addition to capturing some useful B-roll, we got some good footage of George and Jackie as they played dominoes and reminisced about the old days.

After we wrapped for the night, I took Bradley and Paul out for drinks at a nearby bar so we could debrief. When I told Paul it was my first time ever directing, he seemed surprised. Apparently, he was impressed with the way I handled George’s friends and kept my cool through a tense situation. “So when’s the next shoot?” they asked. It’s time to get that on the calendar, keeping in mind that things will most likely not go as planned…and that’s okay.