“The Industry of Big Game Hunting and Breeding is Such a Closed and Secretive World…”: Shaul Schwarz and Christina Clusiau on Trophy 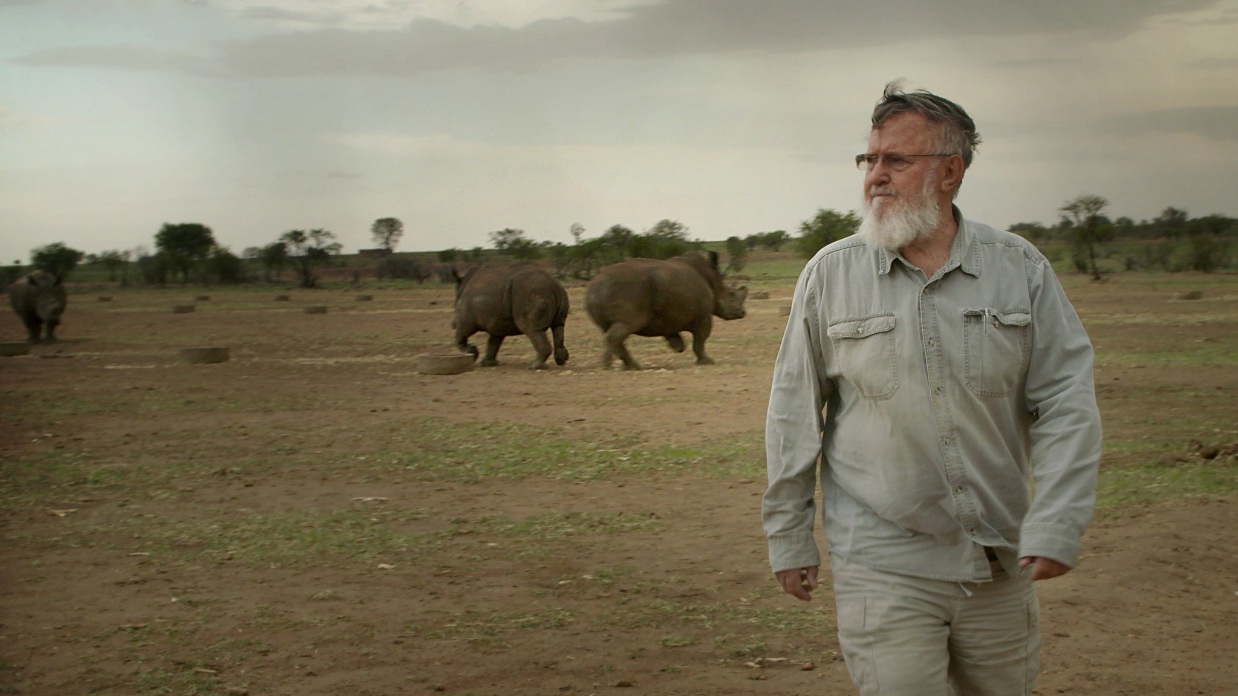 by Lauren Wissot
in Directors, Interviews
on Sep 8, 2017

Trophy, directed by longtime photo-journos Shaul Schwarz and Christina Clusiau, has been garnering buzz and sparking debate ever since its Sundance premiere. The film is a meticulously researched look at every possible angle of the “wildlife industry versus conservation” showdown, taking place in some of the most majestic parts of our world. Undeniably riveting, it’s also the only film I’ve seen all year that made my blood boil to the point of tossing all critical objectivity aside.

I spoke with the duo, cofounders of Reel Peak Films, which aims to bring the cinematic nonfiction treatment to journalism, prior to the doc’s September 8th release (through The Orchard and CNN Films).

Filmmaker: Can you talk a bit about how this project originated and the unexpected turns that I’m guessing might have occurred? I often felt like I was falling down a rabbit hole of counterintuition while watching it.

Schwarz: About four years ago we ran across an article online about big game hunting. I was initially disgusted by it, but Christina, even though she didn’t necessarily like it, wasn’t as shocked. However, it intrigued me and it felt like such a polarizing subject that I wanted to know more.

Clusiau: I grew up in northern Minnesota, where hunting is a very common practice. I spent a lot of time with friends in deer stands and camps even though I never hunted myself. Shaul couldn’t understand how people could hunt a deer or a lion or an elephant, whereas it wasn’t foreign to me because the idea and practice of it had always existed for me growing up.

One thing that attracts us both to filmmaking is taking a viewer into a world where you don’t have access. We like bringing audiences into places that they’ve maybe just heard of, but don’t actually know from the inside. The industry of big game hunting and breeding is such a closed and secretive world, and we wanted to meet the people who were defining it.

Filmmaker: I’ll be honest with you. I caught your fascinating doc on screener and shut it off halfway through. I actually had to be talked into finishing it, though I’m certainly glad I did. Basically, my problem had less to do with seeing images of animal cruelty — though that was disturbing enough — than being forced to bear witness to the pointless narcissism at the core of big game hunting. (I mean, as someone who hasn’t tasted a piece of meat in 30 years I can at least see the rationale behind a hunter shooting a deer to eat. Killing an animal simply for bragging rights is unjustifiably unconscionable.) Did you at all grapple with the issue of giving equal weight to all sides of the argument when one particular side (embodied by an unsurprisingly creationism-espousing, main character) is absolute unethical bullshit?

Schwarz and Clusiau: Quickly, before diving deeper into your question, we should touch on your statement about killing for bragging rights, and the assumption that the hunted animal provides no value beyond the “trophy.” Generally there is a misconception that a trophy hunt is only for the “trophy” and the rest of the animal is left to rot. That is false. Although the hunter may take home the skin, skull, and horns, the meat never goes to waste. Everything is utilized. In the hunts that we observed all of the meat from the trophy hunt went back to the local communities.

As for grappling with the issue of giving equal weight to all sides of the argument — we came to the subject being against trophy hunting, particularly Shaul. In fact, in the early stages of the film we thought that we would gain access to the hunting community and shame them. Then we were introduced to the concept of putting economic value on animals, and how that can help conservation efforts. We were doubtful at first, but as we saw this concept play out in hunting and breeding we started to take it seriously. Conservation requires money, and the economic model of “if it pays it stays” is very interesting, and we didn’t think we should just wave it off.

As time went on, we decided to focus less on the psychology of what makes up a trophy hunter. It was more interesting to understand if the hunters’ practice works for conservation. Let’s say most of us agree that a trophy hunter who wants to kill a lion is a psychopath. Does it matter? Just because I, as a viewer, don’t like hunting should we disqualify it as a form of conservation? It would have been really easy to make a film that mocks the hunters and trashes this industry as a whole, but it would have been, quite frankly, irresponsible. Ultimately, we decided to mainly portray those who believe in the “if it pays it stays” model. However, by giving them a voice we certainly didn’t give them a blank check. We feel we treated them fairly and showed both sides of the argument.

Filmmaker: I’m really curious to hear about your editing process because, as I mentioned, the first half was so hard for me to watch. It surprised me that the second half was far easier to sit through, probably because you focus more on the abstract — the complex theories and philosophies surrounding hunting and conservation — and less on any troubling imagery. I often find myself wondering if veteran conflict journalists are perhaps desensitized to traumatic images in a way that their intended audience is not. What kind of tightrope were you walking in order to simultaneously grab, while not alienating, the viewer? Did you debate whether to slowly acclimate us to the difficult images, rather than throw us in right from the start?

Schwarz and Clusiau: We wanted to show what hunting really looks like and not clean that up. But with that said, there is a very thin line where you can completely alienate the viewer, and then we’ve achieved nothing. There was a period of time during the editing process where we front-loaded some of the harder to watch footage. What we found was that viewers became so shocked and desensitized that the questions we were raising didn’t resonate.

Some of these moments were very hard for us to witness in person. While the camera acts as an emotional shield, it tends to come back and haunt you. I think seeing the elephant hunt proved traumatic for both of us.

Filmmaker: There was one particular scene that shook me to the core: when the trophy hunter erupts in teary release after finally killing his lion prey. It immediately struck me that this is how serial killers must behave – i.e., as a viewer I’m witnessing the catharsis that comes after a sadistic desire is satiated. A psychopath tells himself he’s going to kill just this one woman, just this once, maybe slice off a breast as a trophy – and then, once the deed is done, feels not guilt or remorse but a sense of godly power and deep relief. That’s how the thrill of the kill becomes an addiction. What was it like shooting that scene?

Schwarz and Clusiau: This was one of the last scenes we shot in the film, so by this time we understood our characters and the emotions that may enter in. For us, personally, it wasn’t a surprising turn of events, nor were we shocked by Philip’s reaction, as we knew to expect it. In general we found that the hunters’ reactions to the moment right after the kill are extremely bizarre and uncomfortable. We wanted the viewer to feel that.

On the one hand we wanted to explain the conservation logic behind hunting, but we also wanted to contrast it with the uncomfortable reality of what that looks like. The film provokes thinking and shows that the answers to conserving wildlife are complicated and may challenge your preconceived assumptions, creating a battle of the “heart and mind.”

Filmmaker: I interviewed Shaul way back in 2013 when his stunning debut Narco Cultura hit theaters. Interestingly, I noticed a similarity between the case that John Hume (who needs his own doc), the heroic savior of rhinos, makes in Trophy – that legalizing rhino horn is the surest way to get prices to fall, and thus put poachers out of business – and advocates of drug legalization. It’s the illegality of the product that makes both trades so murderous and lucrative. Were you aware of the parallels as well?

Schwarz: As we went deep into the production of Trophy I did become aware of the parallels of John Hume’s world and the world portrayed in Narco Cultura. I truly think that, historically, prohibition almost never works and has failed us. I think people, at times, choose to close their eyes to the dark reality and not face the hard moral dilemmas that these issues bring to life. With the drug trade there are many people who are willing to say that you could just kill the bad guys, build walls, educate, imprison people – and the problem will go away. But the dark reality of a 30-year-old drug war has shown us very different results.

We’re afraid it’s very much the same when it comes to the rhino horn trade. Most animal welfare activists, as well as people in western society, will tell you that the best way to solve the rhino’s problem is to educate these silly Asians to stop using rhino horn, and to kill all the poachers with anti-poachers. While we truly wish that there were simply no desire for rhino horn in the world, we are not blind to the fact that this desire is fueled by thousands of years of tradition. Pretending that it will just go away seems unreasonable. Rhinos are disappearing at an alarming rate, and they are heading towards extinction. We think that not considering supplying the demand for horn with live rhinos is irresponsible. And so yes, there are many parallels when it comes to the complex reality of narcotics in the world and the legalization of the rhino horn trade.