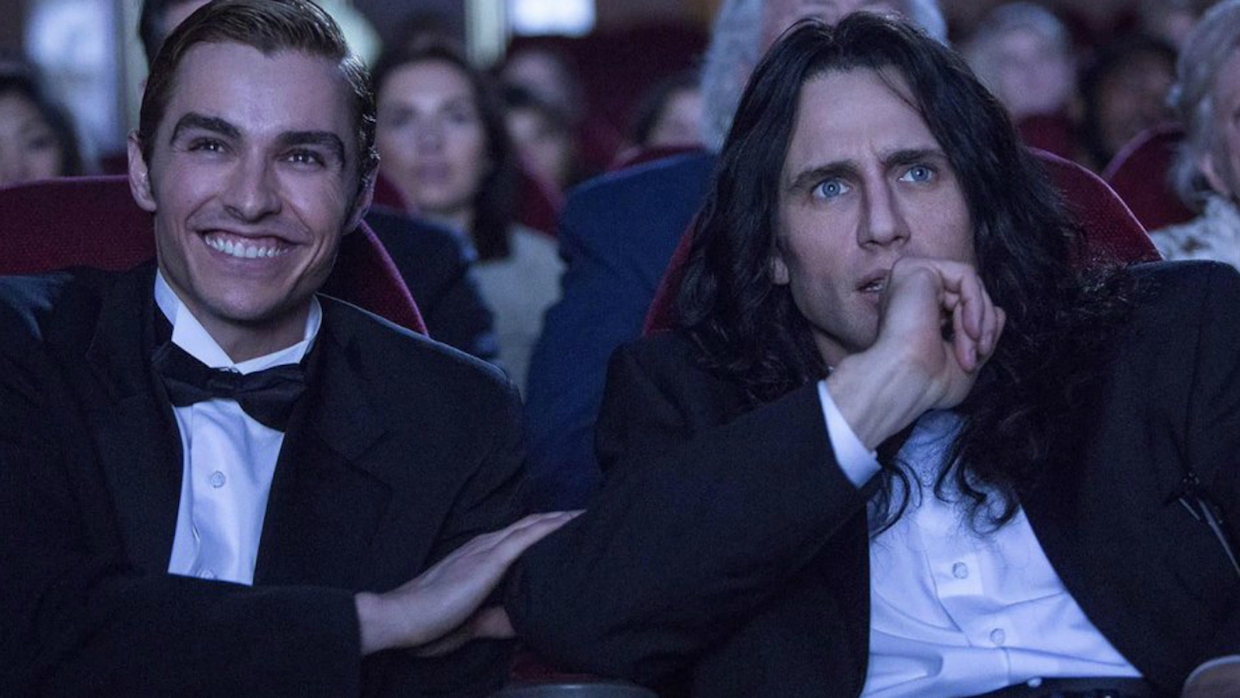 Dave and James Franco In The Disaster Artist

James Franco has been annoying a lot of people, myself included, for a variety of reasons, not least his relentless direction of a shocking number of movies, most quite poorly received: if I’m counting the credits on his IMDB page right, The Disaster Artist is his 16th feature since 2005 — not precisely Fred Olen Ray levels of shoddy productivity, but not that far off either. For easily his most mainstream effort (and, full disclosure, the only one I’ve seen), Franco recreates the making of Tommy Wiseau’s infamous cult movie The Room. I’m not much of a so-bad-it’s-good consumer, but I have actually seen The Room: once, alone, at night, on a laptop, without people around me yelling “Spoon!” or whatever. The movie’s greatest hits, which I estimate at totaling around 15 minutes, are all on YouTube; the rest of it is a fairly grueling experience that’s more than a little sad. As Scott Tobias wrote, “At the core of all this superfluous nonsense is genuine, unmistakable, nakedly personal pain: Somebody out there hurt Wiseau badly, and The Room is his attempt to come to terms with it.” But I get why people are super into it: The Room manifests forms of incompetence on every conceivable level in ways that no one else has quite executed.

Franco’s smiley-faced comedy mostly ditches the pain. The unpromising beginning has various celebs — J.J. Abrams, Kristen Bell, et al. — testifying to their purportedly unironic appreciation for the film in ways that feel like one obvious, uncomfortably condescending joke stretched out too long, but things soon shake down into a nice comic groove. Narrative matters kick off in 1998, when Greg Sestero (Dave Franco) meets Wiseau (brother James) at an acting class. Sestero’s pass at Waiting for Godot is hopeless and lacking in passion, but Wiseau comes off like a moron Brando when he starts screaming “Stella!” incomprehensibly before humping the floor and climbing the scaffolding. He thinks he’s a genius, but cuts to stunned reaction shots — mimicking/anticipating the response to his ultimate achievement — tell us otherwise, even if we didn’t already know who he was. Sestero needs inspiration and thinks he’s found someone who can juice him to thespian excellence; soon, the two are close friends, moving to LA together. Sestero gets an agent, but the improbably accented Wiseau isn’t getting anywhere; the idea to make their own film, with Wiseau’s mysterious bottomless bank account for financing, leads to the film’s greatest-hits overview of the film’s shoot, as strange and far more entertaining than the final result.

One of the reasons The Room has had such a long life is because Wiseau is such a front-and-center weirdo: with his unplaceable accent, prog rocker’s hair and line readings rooted in no recognizable aspect of human interaction, he’s compelling in a baffling way. Franco absolutely nails Wiseau, and the results are predictably hilarious: this is effectively an excuse to extend The Room‘s comic value, as manifested in Wiseau’s performance, on purpose. This isn’t Ed Wood, which allowed its sweetly delusional protagonist a history-rewriting triumphant ending: The Disaster Artist makes it clear that whatever his troubles (and the film has sympathy for a man who genuinely can’t understand why others range from being merely baffled to actively repelled by him), Wiseau ran a terrible set and treated others badly. It’s OK to laugh at his movie: he has the money to insulate himself from the consequences, actually turned a profit on it and really didn’t earn the right to anything better. The Disaster Artist is a one-joke movie, and that joke is a person, but it’s a very good joke abetted by a very good supporting cast (including Seth Rogen doing his spot-on thing) and the fringe period details (posters for Bait, Thirteen Ghosts and Ready to Rumble) are pretty perfect.

Mélanie Laurent’s last narrative feature was the surprisingly strong Breathe, a tonally right-on portrait of teen girl friendship gone wrong unfatally marred by a slightly over-the-top ending (your mileage on that last point may vary). Plonger confirmed her promise for me before a dead end of a second half, but here’s the thing: pretty much all the colleagues whose taste I esteem started walking out not even ten minutes in, and half the room seemed to have left by the end. What was I seeing that compelled me while others were instantly just not having it? In a fluid opening montage, Laurent establishes the meeting between photographer Paz (María Valverde) and journalist César (Gilles Lellouche). The first half’s POV is firmly restless Paz’s; early carnal satisfaction gives way to domestic content, but things curdle fast. Paz has always been a restless itinerant, and bristles when César point-blank tells her she can’t go to Yemen for a project because it’s dangerous; later, when she tells him she’s pregnant, she looks pretty discernibly ambivalent or downright unhappy about this, a reaction he doesn’t pick up on. As a war correspondent, César was kidnapped in Iraq and is ready to settle down, but Paz simply isn’t the settle-down type, and she’s increasingly miserable. Sometime into their child Hector’s infancy, she simply leaves and the film unexpectedly switches to César’s POV, and then Something Happens.

Laurent has a good eye, perhaps erring on the side of slickness — was that what so repelled my colleagues? I’m baffled here, because I’m not generally noted as a particularly soft touch, but I found the first half’s portrait of a woman who simply lacks the putatively “natural” maternal/domestic elements to be plausible, sympathetic and regrettably uncommon. Laurent jumps weeks, months and years with confidence, making clear the changing dynamics without overplaying them. I’ll be in the market for her ongoing directorial efforts for the foreseeable future; still, there’s no denying that Plonger eventually jumps a literal shark. It’s one thing for Paz to adopt a shark which serves as an obvious metaphor for her — keep moving or die — another entirely to make the metaphor increasingly stupefyingly literal, functioning as a much less effective version of The Life Aquatic with Steve Zissou‘s jaguar shark.