The Year of the Woman: The 30th International Documentary Film Festival Amsterdam 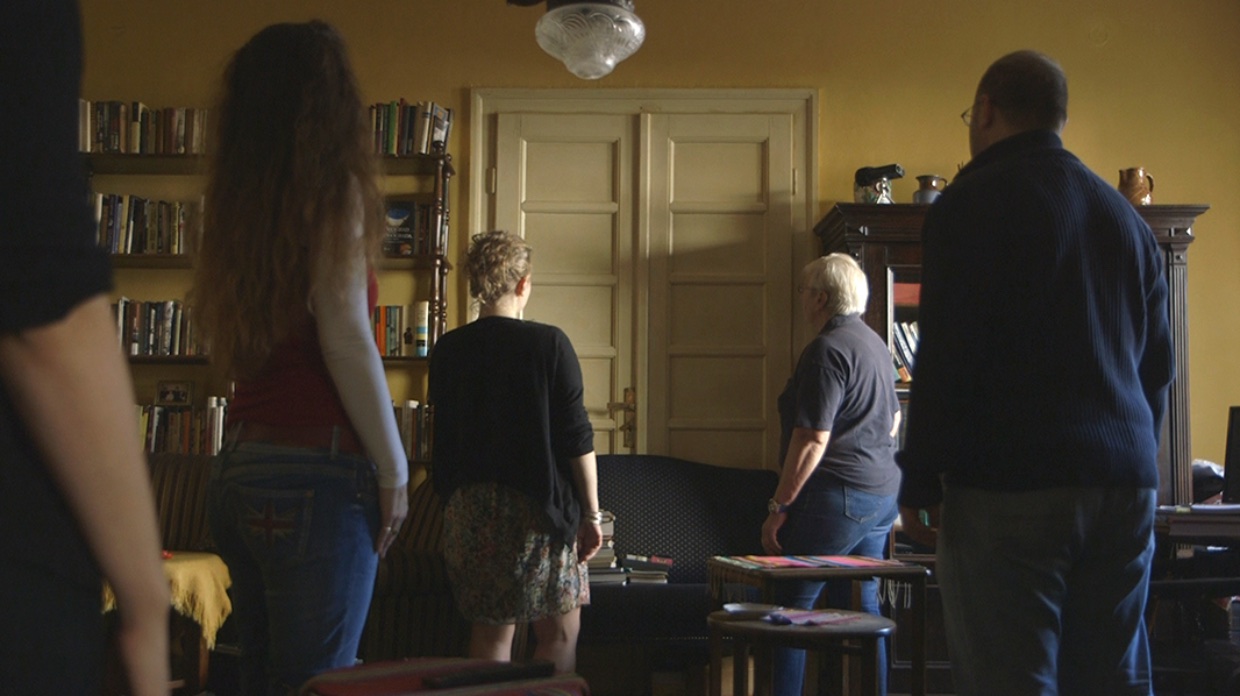 The Other Side of Everything

Before My Feet Touch the Ground, IDFA, International Documentary Film Festival Amsterdam, Lots of Kids A Monkey and a Castle, So Help Me God, The Other Side of Everything

Though it’s been half a decade since I’ve covered Amsterdam’s International Documentary Film Festival, this year’s 30th edition was a welcome reminder as to why IDFA is often heralded as the crème de la crème of doc fests. First there’s its sheer size and scope — this year, a whopping 319 documentaries were presented over the festival’s 12 days. Fortunately, these nonfiction projects of every stripe were helpfully divided into a surprisingly navigable 20 sections — everything from your standard competitions (and not-so-standard, as IDFA DocLab has both a Competition for Digital Storytelling and a Competition for Immersive Non-Fiction) to specialty programs such as “Shifting Perspectives: The Arab World” (a series of films and debates viewed through a non-Western eye) and “The Visual Voice.” For that specific 30th year celebratory section, 18 top-notch directors were invited to screen their personal faves, which made for some unexpected selections. Frederick Wiseman, for instance, chose Marcel Ophuls’s Hotel Terminus: The Life and Times of Klaus Barbie, while The Yes Men presented Josh Oppenheimer’s The Act of Killing.

Then there are the industry adjuncts to the main event — or rather the main events themselves if you’re a documentarian looking to make a deal. The ever-popular IDFA Forum (for those seeking financing) and the IDFA Bertha Fund (nobly dedicated to assisting filmmakers in the developing world) marked their 25th and 20th years, respectively. Docs for Sale (for completed films) and IDFAcademy (for newbie doc-makers) were also back in full force, as well as the relatively new DocLab Academy (a five-day program for interactive media-makers) and the DocLab Immersive Network, launched just last year to connect those working in our 21st century media forms with one another. (And if the highly enthusiastic and overly caffeinated crowds gathered at the DocLab headquarters at Flemish Arts Center De Brakke Grond were any indication, IDFA is set to become a major player in the immersive media deal-making arena as well.)

Yet another milestone marked this year was bittersweet. After helming IDFA from its inception, the grand dame of the doc industry, founder Ally Derks, had stepped down as artistic director (a fellowship offer in Berlin proved too good to refuse), with interim head Barbara Visser taking over for 2017. Though the transition appeared seamless — other than headquarters moving up the street from Rembrandtplein to the Hotel NH Carlton, which simultaneously served as accommodations for myself and most of the other guests, IDFA seemed pretty much the same fest I last attended five years ago — her absence was certainly noted. And the choice of Visser was also praised. Though there are a variety of reasons why women are better represented in the nonfiction world than in narrative filmmaking, I venture to guess that the fact that the most prestigious international doc fests are often helmed by women (in addition to Derks and now Visser, there’s Charlotte Cook, formerly of Hot Docs and currently at CPH:DOX; Tine Fischer at CPH:DOX; and Leena Pasanen at DOK Leipzig — and those are just the fests I’ve written about in recent years) certainly has something to do with gaining that equality.

Interestingly, several of the strongest works that I caught at this 30th edition were character-driven docs that had only one thing in common — the XX factor. Indeed, women took center stage not just behind the lens, but in front of the camera this year, as the spotlight shone on a wide range of fascinating female protagonists and their incredibly diverse stories, from the Middle East’s first female Sharia judge in Erika Cohn’s The Judge, not to mention its first burka-clad American Idol-esque pop poet in Stefanie Brockhaus and Andy Wolff’s The Poetess; to Brett Morgen’s much acclaimed portrait of Jane Goodall as a stunningly young primatologist in Jane, and Barbara Kopple’s study of a trans YouTube star in This Is Everything: Gigi Gorgeous; to the savvy women at the center of Håvard Bustnes’s world-premiering Golden Dawn Girls, vocal members of the Greek political party that espouse Nazi ideology (while denying any ties to neo-Nazism). So with Harvey Weinstein and #MeToo dancing in the back of my mind as I type, here are just a handful of my own chick-centric discoveries to keep an eye out for in 2018.

First up is the film that would ultimately win the Feature-Length Competition. Making its European premiere, and directed by Mila Turajilic (who gave us the inside scoop on the golden age of the Yugoslavian film industry with 2010’s terrific Cinema Komunisto), The Other Side of Everything is an HBO Europe doc that beautifully intertwines the very personal with the painfully political. Turajilic uses the Belgrade apartment of her remarkable mother, Srbijanka Turajlic — a professor and well-known anti-Milošević activist who was also a leader in the revolution — as both a staging ground (her camera rarely ventures outside its four walls) and a microcosm, simultaneously exploring the history of her family and that of the former Yugoslavia through this basic flat that had once been much larger. For when the elder Turajlic was just a toddler the communist government came and split the place in two, handing half to another family, one member of which (a now bedridden woman) still lives there. The door leading to that part of the residence has remained locked ever since. Together the divided entities are one location with a wealth of history embedded in its walls.

And to her own lovely cinematography (the expansive overhead shots of the street outside are intoxicating) and a classical elegiac score, Turajlic adds archival footage of the student-led, anti-war protests, often featuring Srbijanka speaking from a podium. Through present-day interviews, the filmmaker’s no-nonsense mom is then able to reflect on these events, matter-of-factly answering all of her daughter’s questions. Such as, why on earth had she risked arrest to vocally participate in the first place? Srbijanka replies that she simply had an obligation to meet her children’s eventual question of, “What did you do during the war?” with a morally sound response.

Refusing to declare her nationality when a visiting census taker gets to the “most uncomfortable” part of the questionnaire, Srbijanka still stands steadfast in her belief that the civil war was “insanity.” “No one is thinking about the future, all we do is fight each other to rewrite the past,” she laments at one point. “And we’re paying a price for that.” When asked how she’d responded to an interviewer after the Milošević regime was finally brought down, Srbijanka answers with a line from a poem, “Will freedom sing as beautifully as the oppressed sing about it?” The parallels to today’s many global crises smartly remain unstated. And in Serbia the nationalists are now back in control.

Playing in the Panorama program, and at the other end of the political activist spectrum, lies Israeli filmmaker Daphni Leef’s Before My Feet Touch the Ground, the story of a millennial video editor (Leef herself) who in 2011 became an unlikely national heroine through the simple act of pitching a tent in Tel Aviv’s city center. What began as a modest, social-media call to take to the streets to protest skyrocketing rents became a national, and subsequently an international, movement. Through footage Leef captured during these events we see, step-by-step, how unforeseen forces can place undue pressures on the same young idealist who initially lit the fuse. Similar to what happened with Occupy Wall Street (which began two months after Leef’s action), the tent camp movement finds itself struggling with internal competing factions, as Leef herself becoming increasingly criticized, marginalized — and eventually burnt out. “What kind of world is a world with no place for dreamers?” Leef wonders in a speech towards the end. “Because we’re all dreamers and we all have the right to dream. To dream is to be.” Ultimately, Before My Feet Touch the Ground is a cautionary tale with no clear answers — only forthright honesty.

That is, until the financial crisis hits and the octogenarian and her long-suffering (though usually wryly amused) husband must sell the castle. Cue the chaos that ensues as the progeny return to help clean it out. Some scenes are utterly delightful — like when the whole family pitches in on a scavenger hunt through a jam-packed closet, searching for grandma’s vertebrae (as Julia can’t remember where she’d put the bones of her grandmother murdered during the civil war), but instead find such unlikely objects as a collection of umbrellas, an enema and even Julia’s mother’s dentures.

And then there are the hilarious, winding anecdotes Julia herself dispenses, like the time she ordered coffee and found a tooth in her beverage. After freaking out, she asked the waiter how it got there. With no real clue, he offered the absurd theory that perhaps one of the cow’s teeth had somehow fallen in as they were milking her. Turns out the truth was even more absurd — as Julia not only used saccharine in her coffee, but also filled the empty tubes once containing the faux sugar with her children’s teeth as they were growing up. Yes, she’d mistakenly taken a tube of baby teeth to a café.

For Julia is loathe to rid herself of anything — from the chandelier and suits of armor, to paintings, cabinets of dinnerware, a chapel, and even a skeleton, she wants to keep the entire contents of her castle. (When Salmerón inquires with a nudge whether getting rid of things might lighten one spiritually her answer is an unequivocal no.) And yet the film is also infused with poignancy. After suggesting to dad that they leave a note for the castle’s future tenants he agrees, saying it should read, “Please take good care of it. It was my love but now I’m thrown out.” As Julia finally takes a good look around at the mess of stuff in her yard, she sighs, “Thank God Christmas is coming soon.” “It’s July, Mom,” Salmerón responds. To which the declared atheist snaps, “I don’t care.” As for worrying about her, Julia also tells her concerned son that there’s simply no need. “I’ll resurrect later.” Amen, sister.

A far more disturbing eccentric protagonist could be found in Jean Libon and Yves Hinant’s French-Belgium coproduction So Help Me God, a fly-on-the-wall portrait of Brussels judge Anne Gruwez, which also screened in the Best of Fests category, having premiered earlier at San Sebastian. From the IDFA program, which has to serve as the synopsis understatement of the year: “The personality of the outspoken central character is strikingly offbeat, and she sometimes takes a decidedly politically incorrect tone in her relations with colleagues and suspects. The conversations themselves are also extraordinary: sometimes comical, as the judge asks a sex worker about her clients’ bizarre requests, and sometimes disconcerting, when she listens impassively to the story of a woman who murdered her eight-year-old son.” More to the no-bullshit point, in reality Gruwez is a breezily racist, misogynistic, xenophobic, handicap-prejudiced government worker — basically Marine Le Pen, Donald Trump and Sheriff Joe Arpaio all rolled into one. It’s horrifying that she’s employed at all.

From joking on the phone about a “typical Albanian” wife-beating client (yes, she calls those who come before her to plead for mercy “clients”), to pulling over in her car to tell a probable Parkinson’s-suffering beggar to “stop trembling,” to earnestly asking, “With a streetwalker, how do you know if she was raped?” while assessing the cold case of a dead hooker who was strangled, Gruwez unintentionally presents herself as Exhibit A for why Belgian law enforcement has earned its Keystone Cops reputation in recent years. Commenting on a (“wasn’t unattractive”) escort’s lack of teeth being good for “velveteen rubs” may make for lighthearted conversation, but it sure as hell won’t solve the poor woman’s murder.