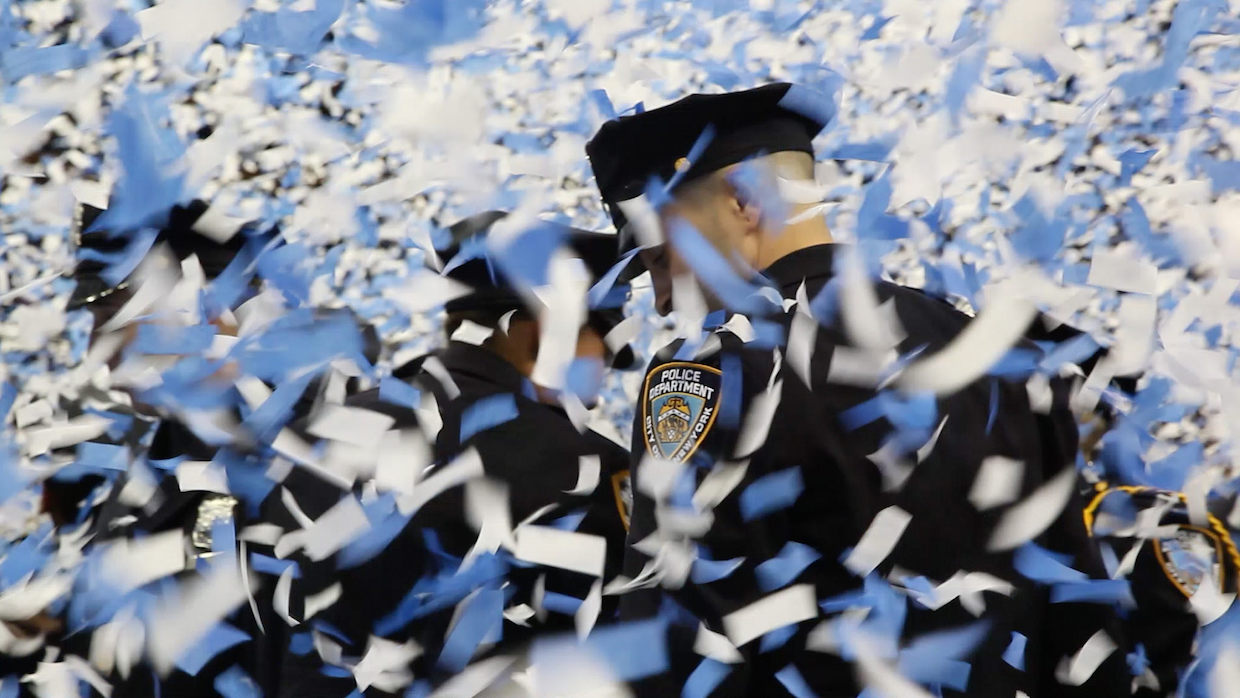 I’ve written before about my fondness for local news: “a fun, seemingly randomized mash-up of crimes caught on security cameras, traffic and weather updates, forced banter, cooking segments, deep concerns about marijuana use and ‘reporting’ that’s thinly veiled support for the NYPD.” One segment in the latter mode still regularly replays in my mind: following the 2014 shooting of two NYPD officers, one channel — playing to that unflappable demographic which believes the police are always in the right — aired a particularly shameless segment in which a reporter found a seven-year-old black child to tearfully state how much he loves the police and how sad this all is. You don’t have to read particularly hard between the lines to understand the message that’s being conveyed here and how unsavory the politics are, but it still shocked me. NYC has been one of the epicenters of repeated outrage these last five years or so as especially flagrant civil rights violations of black and Hispanic citizens have come to public light. The fatal 2014 choking of Eric Garner figures heavily in both Monsters and Men and Crime + Punishment, whose different approaches to examining police brutality raise all kinds of questions about rhetorical efficaciousness and strategic activism.

Stephen Maing’s Crime + Punishment follows a network of POC officers and victims of police brutality, both sides equally hurt by quotas for summonses and arrests (NYC’s budget is alarmingly dependent on the attendant levying of fines. This is not a particularly new issue; see e.g. this 2012 story about an officer who, after coming forward with tapes documenting these practices, faced all manner of retaliation from the department, including a forced six-day stay in a psychiatric ward). Maing picks the thread up in 2014, when a NYPD-officer-turned-PI converged with 12 officers (the “NYPD 12”) bringing the ostensibly-discontinued practice of meeting quotas (often via false arrests) back into the public light. And hey, local news paid a substantial part in helping their case: shout-out to the I-Team at NBC’s NYC affiliate for providing a forum to amplify their charges.

Maing does good longform work tracking his large cast over four years. (Big shout-out for using drone shots in a non-hacky way, in sustained shots that cast an ominous spell rather than drifting purposelessly to bridge two segments, the current equivalent of sitcom establishing shots.) Much of this recapped (in a good, worthwhile way) recent events I was already familiar with, but two moments popped out especially. One is a meeting between the NYPD 12 and black community activists; the latter point out that some of their allies wouldn’t come simply because they won’t engage with any officers, no matter how sincere they may be in endangering their careers to uncover the rot. There’s an irresolvable gap between the two parties, and no remedies are discovered. That leads logically to a moment late in the film, where a protester yells at a line of cops: “Black officer, Puerto Rican officers — you are hated all across the United States.” This is a truth that, in some ways, seems obvious; on the other hand, see that aforementioned segment with a child tearfully testifying for the benefit of the conservative base. The other striking moment is a meeting of the NYPD 12 with an attorney as they prepare to articulate their case on local news. Officer Edwin Raymond is prompted  to articulate what the problem is to test his messaging skills. Raymond logically connects the dots: even if (ostensibly) progressive mayor Bill de Blasio succeeds in promoting an agenda of affordable housing, universal health care and pre-K (let’s not even get into the reality of that actually happening), it’s all useless if a four-year-old benefitting from those policies is swept into a series of false arrests after they turn 16. The attorney stops him and says that’s too complex to work as a soundbite: “Dumb it down.” He is, in his own way, right, but if you can’t substantively address anything in a public forum, how can these difficult issues be resolved?

A few years ago I would have been pretty comfortable dismissing Reinaldo Marcus Green’s Monsters and Men and moving on; now I’m not so sure. To be fair, Monsters is definitely not my kind of movie — it contains the kind of thesis-driven screenwriting that drives me crazy. The same dilemma is run in three different permutations: in a racist society where police violence against people of color is a given, at what point is the instinct for self-preservation overwhelmed by the moral imperative to get involved? First we have the Garner-by-another-name killing itself, smartphone-captured by Manny (Anthony Ramos) and uploaded despite warnings from NYPD goons to not go there. The killing and Manny’s subsequent reprisal arrest on unrelated charges trouble black cop Dennis Williams (John David Washington), who must decide whether to cooperate with an internal affairs investigation or close silent ranks with fellow officers. (NB that Monsters and Men‘s portrayal of IA is much sunnier — they at least mean well — than the reality captured in Crime, in which that division is just another tool to keep everyone in line.) HS baseball player Zyrick (Kelvin Harrison Jr.), on the cusp of a big showcase game, is increasingly troubled by the killing video and inspired to join protests that will inevitably risk tear gas, potential arrest and the potential destruction of his future.

Every scene has only text, no subtext, each line of dialogue and character introduced solely for the purpose of being called back as soon as possible. The deck is generally stacked — Manny isn’t just risking his neck against a police department whose loyalty is only to itself, but he’s also about to start a new job and his wife is pregnant. Officer Williams and his wife have another couple over for dinner, and the scene starts with some 30 seconds of light chatter about how the latter have acquired a new cat, name of Simba per The Lion King. This bit of banter isn’t meant to give shape to the characters’ lives in three dimensions beyond the task-oriented; it’s a purely functional buffer/moment of release, and plays as such, which also assumes I’m an extremely pliable and predictable viewer whose emotions will predictably move up and down as directed.

But this movie isn’t made for me, is it? Monsters and Men provides mimetic affirmation that these are dark times, and you’re not alone in constantly clocking them. That 38% of America that remains basically, inflexibly in support of Our New President will never be moved; those in the ambivalent middle might yet have a shot at changing themselves. Actually, I doubt this movie will do anything to shape hearts and minds, but if there’s a chance then why not? (The anecdotal story I saw on Twitter of someone’s cab driver explaining how The 13th changed their mind about the reality of systemic racism has stuck in my mind.) As far as things vying for the dubious distinction of being the headline-friendly Movie We Need Now, I’ve seen far worse — cf. last year’s Sundance entry Gook, a transparently risible, inept and hideous-looking enterprise. Monsters and Men looks like an actual carefully composed movie (props to DP Patrick Scola). So: I’m punting a bit.

More songs about systemic racism and calamitous fallout: told in an introduction and six chapters (just like Dogville, though I’m told that’s unintentional), Robert Greene’s Bisbee ’17 examines an Arizona city’s collective unexamined guilt and complicity in a shameful situation. In 1917, the copper-mining company town was staring down IWW organizers who’d come in to demand some fairly basic safety protections et al. for the workers. The company was not going to negotiate, and the standoff climaxed with the forceable roundup at gunpoint of somewhere in the vicinity of 1,300 workers, who were herded to the baseball stadium, led to cattle cars and dumped in the middle of the desert. It’s the kind of flagrantly awful chapter in American history I was surprised to learn wasn’t the subject of a  John Sayles movie already, although I suppose Matewan already exists.

Where Greene’s previous films have at times forcibly blurred the line between fully constructed fiction and straight documentary, Bisbee ’17 is a relatively straightforward affair. On the 100th anniversary of the deportation, Greene and the town decide to reenact it: the film logically climaxes with this charged event in its sixth chapter, with a leisurely build-up offering a cross-hatch view of Bisbee in the month leading up to it. Perspectives span the left-right gamut: on one hand, the woman who says that it was, overall, the right thing to do to protect Bisbee from the incipient threat of socialism (!), on the other the man who bluntly denounces the Bisbee of 1917 as a “corporate gulag.” I suppose I shouldn’t be surprised that there are people who can still justify one step short of genocide to protect us all from Canadian healthcare, but I’m surprisingly naive that way. (Parallels to the present moment don’t need explication -— I am grateful that any invocation of Our 45th President’s name has been cut out.)

Bisbee hits a lot of my aesthetic sweetspots: there are Gerry-esque walking shots for days, and the widescreen framing perfectly fits the expansive landscape tableau. Where Greene’s previous work purposefully set about muddling the boundaries between straight documentary and ambiguous staged narrative, here the lines are clear: observational footage on one hand, completely staged reenactments on the other, including musical numbers. (One thing I learned from that component: Billy Bragg covers aside, labor songs from the teens are the most irritating things on the planet.) A lot of the method relies upon scenes in which characters are given a prompt whose successful execution is less the point than the moment when something goes wrong and a revealing moment that couldn’t possibly staged breaks through — the equivalent of dialogue that rings so true that it must be overheard rather than scripted. Best example: a character who starts reading out a IWW tract and stumbles over the word “solidarity.” What does that mean, he asks, and gets an answer offscreen. This isn’t a vocabulary failure — in this case, not knowing a word is literally the same thing as losing access to a whole activist tradition.