“The Bisbee Deportation Doesn’t Matter Unless it Relates to our Real Lives Today”: Robert Greene on Bisbee ’17 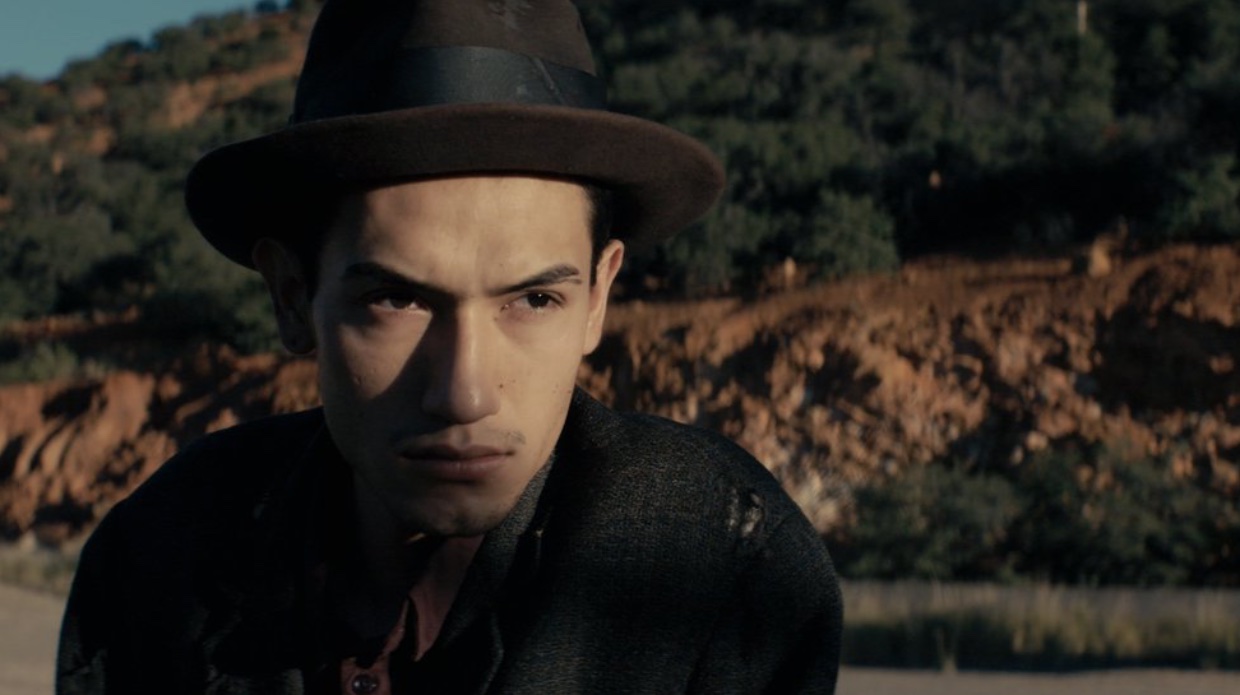 Sundance vet Robert Greene (Kate Plays Christine, Actress) returns to Park City this year with a film quite unlike his previous features, at least in subject matter if not approach. For Bisbee ’17 Greene turns his trademark technique of fusing fiction and nonfiction elements on the story of a sordid anniversary, the 1917 Bisbee Deportation, in which 1,200 immigrant miners in Bisbee, Arizona were rounded up, shipped out of the copper town on cattle cars and left to die in the desert. Through staged recreations developed and performed by local residents — including an actor whose mom was deported to Mexico when he was a child, and a woman whose ancestors include two brothers, one who deported the other — Greene takes a WWI-era tale pitting corporations against unions, capitalism against socialism, white “natives” against newcomers, and makes it unnervingly relevant to our present day.

Filmmaker caught up with Greene to discuss his historical hybrid a few days prior to the film’s premiere.

Filmmaker: So how did you even learn about this little known piece of history, and what drew you to making a movie about it?

Greene: My mother-in-law bought a house in Bisbee in 2003, and I immediately fell in love with the town. Like New Orleans, it’s a place where you can actually feel ghosts as you walk the streets. I’m not a religious person, or even particularly spiritual, whatever that means, but I’m 100% sure the place is haunted. You can’t dig up all those minerals from the earth and release that much raw energy and have that much drama contained in such a small area without conjuring some desperate spirits.

During my first visit to town I walked down Tombstone Canyon to the Mining and Historical Museum and picked up Robert Houston’s book Bisbee ’17, which novelizes the Bisbee Deportation, and I was shocked that I’d never heard of such a dramatic event. It was the Bush years, and the burial of this story hit me hard; somehow the haunted feeling made more sense. This was five to six years before I’d made my first feature, and I just immediately wanted to tell this story as a kind of founding myth of this strange, mysterious place. I wondered aloud that “maybe we could collaborate with the locals to recreate the deportation” and just “see what happens.” Fourteen years later, after thinking and re-thinking about how to tell the story, we were there doing just that.

Filmmaker: Coincidentally, I actually watched the film on screener while I was escaping winter, visiting friends down in Tucson (and drinking coffee from Old Bisbee Roasters, oddly enough). I’ve been to Bisbee, and the better known, nearby, tourist trap Tombstone, and I’ve been saying for years that the town needs its own film festival. Unlike kitschy Tombstone, Bisbee has a surprisingly thriving little artists’ colony, kind of like the old Key West in the southwest. (Which made me think that the place to this day retains the same unconventional rebellious streak that led to the miners’ strike a century ago.) Did the community welcome the production with open arms, though? Or were the longtime residents with family on both sides of the deportation wary of an outsider coming in to tell their story?

Greene: I knew from going to Bisbee for years that the townspeople would be skeptical, and rightly so, of an outsider coming in to tell their story. This is a place full of independent thinkers: artists, hippies, outsiders, rebels and weirdos — people who don’t naturally trust the rest of the world.

Our team knew this going in, so we tread cautiously and respectfully and were really open with potential collaborators about what we were hoping to accomplish. I think they were put at ease by our enthusiasm and knowledge of the story. And even the fact that I had family in town helped. We were also working with locals like our production designer Ed Briggs, and well known historians like Katie Benton-Cohen, and that helped a lot. By the end, I felt like we were embraced by most of the people we wanted to work with (there are always a few cantankerous folks in town!) and that acceptance shows up onscreen. Actually, deep down, Bisbee is a place full of people who want the stage in some ways. It’s not Tombstone, by any means, but it’s a place full of people who imagine themselves as people who live in Bisbee. People with stories to tell, like Sue Ray, whose grandfather deported his own brother, were eager to collaborate.

Filmmaker: The anti-union deportation in 1917 conveniently served as a cover to cleanse Bisbee of its immigrants, so your story feels very timely. But anti-capitalist sentiment tends to have long been intertwined with xenophobia. Even The Red Scare conveniently targeted Eastern European Jewish immigrants. Once immigrants, not to mention any people of color, start demanding equal financial rights — money is power! — they’ve crossed the white patriarchy’s red line. So did you learn anything from this specific story that surprised you, or did the Bisbee Deportation just confirm for you what’s been happening throughout our national history?

Greene: In many ways the history of the 20th century in America is a history of “what ifs.” In 1917, with WWI galvanizing an already active left, there seemed like a real possibility that capitalism could be toppled. Just four months after the deportation, under radically different circumstances, Russia saw the Bolsheviks take power, of course. This I already knew — that there were secret histories of near-miss radical moments in our history — and that the deportation of members of the Industrial Workers of the World and its sympathizers from Bisbee was a part of that bigger story.

I guess I didn’t quite realize when we started just how divisive the deportation remains today and just how entrenched the arguments for the deportation were and are to this day. People — and by people I mean everyday folks, not just mining executives or bosses) — truly believed then, and still can reason now, that Bisbee would have ceased to exist had these “socialists” won the day. They understand how it all looks — the town was often called a “white man’s camp” and they were deporting mostly immigrants — but they insist that this action was justifiable, and was about saving the town and supporting the boys sent off to fight in WWI. (Copper was essential to the war effort, and Bisbee was an important mining camp.) That these arguments persist, and that they can be logically argued, was a bit astonishing, and it really animates what we were filming.

Filmmaker: The film has quite an unusual sound design, and it’s certainly the most musical of your nonfiction films. Can you discuss that process and your approach to the film’s sound? (I almost thought the whole thing was going to turn into a musical at one point.)

Greene: As one of our stars Chris Dietz explains in the film, the labor movement used to use theatricality, music and performance as ways to dramatize the struggle for worker’s rights. The IWW specifically were always singing songs. So we took some of those songs and turned them into ghostly fantasy sequences, meant to evoke characters’ longing for something else, something deeper, some more powerful connection between their own stories and the buried past.

People always use fantasies of our imagined past to understand the present, and we worked with our subjects to evoke this through genre — western, musical, music video, even telenovela. Many of my students worked on the film, and one of them was Sebastián Martinez, who is a talented singer who arranged and recorded haunted versions of the IWW songs we wanted to use. His is the ghostly voice that (lead actor) Fernando merges with over the course of the film. As far as I know, Sebastián’s song is the first recorded version of the long-lost Bisbee Deportation anthem that plays in the credits. The musical aspect connects us to 100 years ago and externalizes the internal drama of the town and its people.

Filmmaker: Several scenes are emotionally uncomfortable, if not downright painful, to watch — especially those involving Fernando, whose mom was deported to Mexico when he was only seven. Did you have qualms putting him, along with several other actors whose ancestors were touched by the deportation, through that? Or did you see this decision as crucial to tying a century-old tale to the present day?

Greene: I always have qualms about making documentaries because the camera brings these things out and forces us to make connections we wouldn’t otherwise make. But that is the value of this project, if there is any. The Bisbee Deportation doesn’t matter unless it relates to our real lives today. Without that connection to now it’s just a shocking story of another time, easily put back away.

Seeing how Fernando did and did not connect his own story to the Deportation was both painful and rewarding for us as well. I’m not sure the dust has settled yet for him or for us to know if it was all worth it. But those are the kinds of films I want to make, ones that embrace the trickiness of making movies in the first place. Why should we make this? Why should anyone make anything? We take for granted that it’s always a good thing to tell stories. But after I called “action,” and we began reenacting the roundup itself in the exact spot that it happened one hundred years prior, and people were taking it all way more seriously than I could have imagined, I kept asking myself that same question — is bringing all this up a good or bad thing?

I still don’t know. But I do believe we all learned something valuable about ourselves, and I hope the audience will, too. It’s probably true that doing something like making this film in this way is better than ignoring our past and disregarding how that relates to our present. But to really know that answer you’d have to individually ask all the folks who worked with us to make it happen. They’d have to tell you their thoughts. Mine only matter a little.