YouTube Body Horror: Penny Lane on Her Morgellons Disease Doc, The Pain of Others 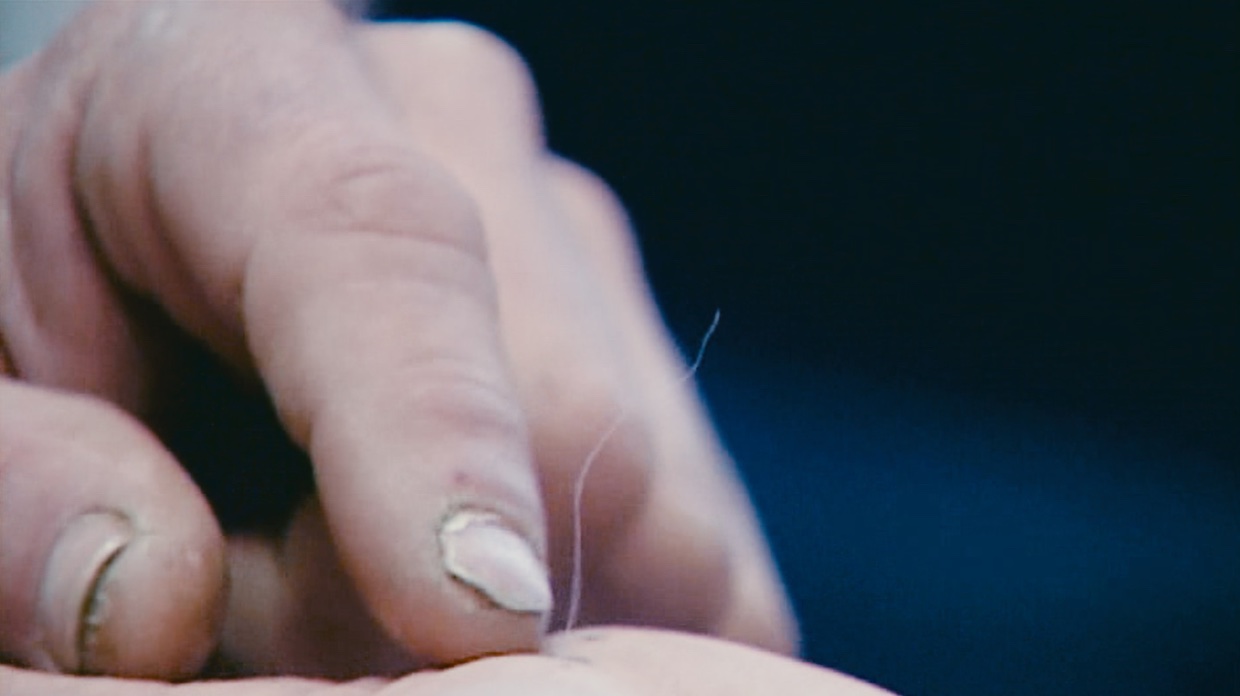 The Pain of Others

by Lauren Wissot
in Directors, Festivals & Events, Interviews
on Jun 25, 2018

In the era of fake news and alternative facts, and of people constructing their own custom-made versions of reality, Penny Lane’s The Pain of Others feels very timely, to say the least. Defying any expectations and preconceived notions, Lane’s perfectly titled “body-horror doc” acts as a challenging and thought-provoking sociological study of one unusual YouTube community (which, with Maxim Pozdorovkin’s Our New President also on the fest circuit this year, makes me think “YouTube behavioral psych” might soon become a thing).

The Pain of Others weaves together the video diaries of three women suffering from Morgellons disease, a term given to a scientifically unrecognized series of symptoms that seem straight out of a Cronenberg flick (crawling sensations and thread-like fibers emerging from the skin!), and it leaves the viewer with conflicting emotions and more questions than answers. Indeed, watching the film before its Rotterdam premiere I went from laughing and rolling my eyes to getting angry at these “con artists” to feeling ashamed that I was being dismissive of mental illness to wondering if one woman was a psychologically disturbed fraudster, another just lonely and mentally ill, and on and on. In other words, these psychically distressed ladies defy any easy categorization — much like Lane’s entire body of work.

Prior to the film’s June 28th NYC premiere at BAMcinemaFest, Filmmaker was fortunate enough to catch up with the very busy director who also has two shorts, Nellie Bly Makes the News and Normal Appearances (debuting in NYC as part of the Rooftop Films shorts program on July 14th), currently making the festival rounds. The Pain of Others will be released exclusively on Fandor July 1st.

Filmmaker: So what made you want to make a film about this obscure subject in the first place? Was it the online community of sufferers (all of whom are white, middle-aged women)? Their use of the YouTube medium? The idea of — what seems to me at least — an Internet-based, crowd-sourced disease?

Lane: I first came across the subject of Morgellons in a 2013 essay by Leslie Jamison called “The Devil’s Bait.” Because of my last feature Nuts! I had already seen what happens when doctors can’t help you — how conspiracy theorists, con men and quacks rush in to fill that void. I could see how this was at play in the Morgellons phenomenon, and additionally saw an opportunity to engage with a complex set of issues that you might group together as the mind/body problem as it relates to illness and “contested diseases.” This had been vexing me ever since I realized the probable role of the placebo effect in Doc Brinkley’s impotence cure, which made the question, “Did it work?” harder to answer than it might seem. And I tend to make art about what vexes me.

I started looking into Morgellons and of course ended up on YouTube. I began with a more clinical or forensic gaze — I focused on videos where attempts were made to document the physical evidence, the fibers and so on. I’m often animated by a desire to understand why people believe what they believe, what the evidence is. But soon I discovered that the vast majority of the Morgie videos were not about the physical evidence at all. They were vlogs, or video diaries, of the “turn the camera on and start talking” variety. I found myself discovering, observing, and ultimately chronicling the Morgie YouTube community. The videos were raw, banal, bizarre, sincere and frank. I could not stop watching them and talking about them. (I was at that time in residence at the MacDowell Colony, and anyone who had the misfortune of sitting next to me at dinner could attest to both my obsession and to the fact that talk of Morgellons does not go well with eating.)

It’s always hard with projects to look back and remember exactly what was it that I was so interested in, what kept me watching and thinking and reading. Because the answer is just “all of it.” Everything about it was interesting to me! Diving into a new work of art — it’s like falling in love. You can make up a list of “good qualities” about the object of your desire, but really that’s all beside the point. I just loved everything about these videos. While I acknowledge my source material can be difficult — the videos are harrowing, confusing, and ugly in too many ways to count — to me their salient feature is how unsettling they are. It is really hard to find and settle on the emotional response that feels right. Again, I was vexed. Extremely vexed!

Filmmaker: In addition to this feature, you’ve got two shorts — Nellie Bly Makes the News and Normal Appearances — also on the festival circuit. Interestingly, all three, while completely different, deal in some way with how women present themselves in our society, one dominated by the male gaze. Is this a particular feminist issue you’ve wanted to tackle for some time?

Lane: Yes, 2018 turned into the year of female protagonists for me. Normal Appearances and The Pain of Others are both found-footage films concerning a sort of uncomfortable, morbid self-attention — a consciousness of being looked at and watched that seems somewhat specific to a female experience. Normal Appearances focuses attention on very specific body movements of female contestants on The Bachelor, poses and gestures which communicate both “Please look at me!” and “Please stop looking at me!” at the same time. Pretty deep, conflicted, psychological stuff I personally feel every day.

Nellie Bly Makes the News is about the role of narrative in shaping both our personal identities and our shared history. Nellie Bly is a person who was born in late Victorian times and did not like the role she was born into as a working-class woman. She was determined to write a new story where she could be the kind of hero she wanted to be. The film explores her place in the history of journalism, and the role fiction played in all of this. So it’s all more stuff that vexes me. If we must rely on narrative (fiction) to understand and construct reality, how do we know what is true?

Filmmaker: I’m also curious to hear how you grappled with the ethics of making a film on such a controversial topic as Morgellons, created from your living subjects’ own footage. Are the women you present, and the Morgellons community at large, even aware of the doc? (Though through the editing process you’ve certainly been quite careful not to cast judgment on any of your characters.)

Lane: In her essay, Leslie Jamison asked what “kinds of reality are considered prerequisites for compassion?” This deeply unsettling question haunts the film, and me. It is a difficult and interesting ethical problem, and the form of the film reflects that difficulty and interestingness. The Pain of Others really isn’t a “documentary about Morgellons,” at least not in the ways people often expect. (But now I’m afraid I’m making this sound really not fun. I, of course, think it’s a very fun film!)

As far as the ethics of representing the controversy you alluded to, the controversy is over the question, “What is Morgellons?” As of right now, I don’t know. If this sounds like a cop-out, too bad, as “I don’t know” is the only intellectually honest answer. And it’s not for lack of trying to find a more satisfactory one, as I have researched this subject for years.

The mainstream says there’s nothing physiological happening and that it is all a delusion, but the mainstream is often wrong. I won’t pretend to take the blatant pseudoscience or conspiracy theories seriously; that is not required of me intellectually or ethically. But I do believe there is a real possibility that there exists a skin condition producing the fibers that are the key diagnostic of Morgellons. A small number of scientists are investigating this very plausible theory, despite the scorn heaped upon them by the mainstream. In the meantime, a lot of people whose suffering and pain is not currently understood by their doctors to be “real” are drawn toward the clarity of a Morgellons (or chronic Lyme, or ME, or MCS) diagnosis. As Anne Carson said (I think), “One of the principle qualities of pain is that it demands an explanation.” So, long story short, this is not a settled matter, and the film reflects that. More reasons to remain unsettled.

The issue of my relationship to the subjects (and really, co-authors) of the film is another, different ethical matter. The videos, which are public and have hundreds of thousands of views, are explicitly intended to be shared as widely as possible. I wrote to the YouTubers whose vlogs I sampled and let them know about the project, offered to be in touch, sent viewing links when the film was complete (they didn’t watch), and haven’t really heard back from them. So, the line of communication is open, and I am open, but there hasn’t been much there. I’m certainly not going to harass them.

Filmmaker: Usually we rely on the director to guide our POV, especially when it comes to nonfiction filmmaking, but you almost seem to want to let the audience decide the narrative for themselves. You don’t signal to us how to feel about any of your characters. Which is both exhilarating and frustrating, as it really challenges the viewer. Can you discuss this process and why it was important to minimize the director’s role, so to speak?

Lane: The Pain of Others is really just an observational documentary where what you’re observing is YouTube. Or maybe it’s better seen as a found-footage compilation film. I don’t know. I wanted to create a psychological space of unsettling encounter and extended empathetic negotiation between subject, author and audience. The form emerged from that desire.

Yes, many films — including films I myself have authored! — require very little by way of audience participation. It’s usually more like getting on a carnival ride — you can sit back and relax (and eat your popcorn). The Pain of Others is a bit more like engaging in a conversation; yes, you can just listen and watch, but you’ll get a lot more out of it if you get in there with your own ideas. It’s not a popcorn movie.

Filmmaker: You worked extensively with archival material in Our Nixon, so I’m wondering what the different challenges are with a modern-day platform like YouTube. I have to admit, I just can’t get absorbed in a YouTube video like I can with historical footage.

Lane: The Pain of Others is an interesting analog to Our Nixon for a number of reasons. Both films feature protagonists representing themselves with amateur footage, and both feature troubling gaps between the internal, subjective realities (captured by their footage) and what the mainstream, historical world has to say about their lives and experiences (captured by news broadcasts).

There are so many different kinds of YouTube videos and so many different kinds of historical footage. If it’s selfie culture you find boring, that’s fair enough. If you mean the contemporary vlog format specifically is not as absorbing as say, old home movies where the camera is pointed outwards, keep in mind — one day the vlogs will be historical footage! These are documents of our time. And I predict the aesthetic qualities of these 240p, poorly compressed, YouTube videos will be one day bathed in the warm glow of nostalgia, too.